Yet another Forest Hills fire 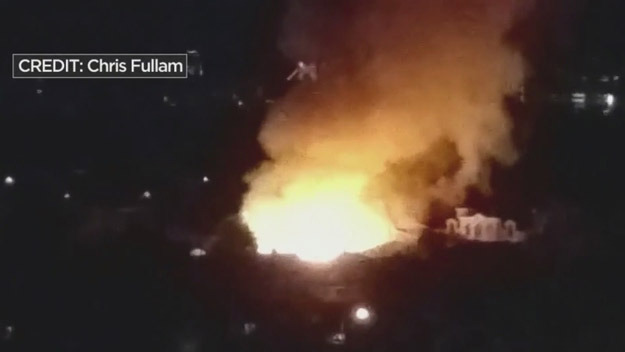 A two-story home in Queens was destroyed by fire late Wednesday — the latest in a string of suspicious fires to come under investigation, firefighters said.

Firefighters received a call around 11:21 p.m. for a fire on 67th Dr. near 108th St. in Forest Hills, according to an FDNY spokesman. The fire became a second alarm within three minutes and took about an hour to bring under control.

Wednesday’s fire was the third to strike the neighborhood in the last three weeks.
Posted by Queens Crapper at 10:07 AM

That's the 7th house fire in the past 2 weeks. Crazy!

Is that a task force I smell brewing? I hope they catch this creep (if it is all linked).

Is that a task force I smell brewing?

Did you say task force?

Time for me to schedule a press conference where I propose a new law requiring a database on all purchases of kitchen matches and cigarette lighters.

Thank the good Lord no one got hurt.

This is north of Queens Blvd. correct?

and if it is then what is the motive, instilling fear into neighbors, criminal avarice by a LLC skell company I mean shell company or just a firebug doing it for shits and giggles, and why in that area?

And how come there weren't cops patrolling when this is clearly a pattern.

Has anyone looked at these construction roperties. Are they huge ugly McMansions or multi-family third world dwellings. Maybe someone is taking a stand on this kind of crap which destroys neighborhoods.

Third?! This is the SEVENTH! You think it's suspicious?

"Maybe someone is taking a stand on this kind of crap which destroys neighborhoods."

Plausible. Every pic of these has those familiar green plywood walls. With the stealth way it's being done it could be some weather underground radical anarchist type. It's almost like one of those graphic novel antihero characters,

And that's right it is the 7th one. where is the local news media and the cops? This is like some Bronx is Burning shit.

You think this would happen in Goddamn Brooklyn today (well it used to, with regularity in the aughts)

I think these skell companies have become so greedy that they are hiring mercenaries now. This may sound nuts considering it's just forest hills but this guy could have special forces or CIA training.

But kidding aside, this one is a sick mofo.
Needs to be caught before someone gets hurt or killed.

This is the SEVENTH! You think it's suspicious?

Nah, just a regular day at the office.
Move on people nothing to see here. :):):)

Sometimes I think this guy should be be given a medal...

On a serious note, all it does is jack up everyone's insurance rates.

The building and development will continue...

This is all north of Queens blvd, in a part of Forest Hills populated mostly by wealthy Bukharan jews. They have been bulldozing small suburban style houses in this area for a decade, and replacing them with huge McMansions with no green space (everything is paved over around the houses).

is the ninja someone in the community finally fed up with what they have done to the area?

I suspect it's just a firebug. He/She is hitting new home construction and the old parkway hospital (at least once, potentially twice - there was a fire there maybe a year ago that went unreported).

The MO is always the same: unoccupied structure, intense flames when the FD shows up. Nearest firehouse probably has a 2-5 minute response time to these streets, so a significant amount of accelerant must be being used for them to be fully involved (fire throughout the building) by the time the fire dept. comes.

It's easy to say 'fuck it, burn them all' since they are building crap, but at least one of these fires spread to a neighboring occupied home. Sooner or later someone (or a whole family) is going to die because of this.

The cops could catch him - just get some undercovers parked in the area, profile anyone walking through late at night - maybe even stop people they suspect. But this require actual police work, in a wealthy white neighborhood where people will immediately start crying about police overreach. 'Stop and frisk?' that happens in the ghetto, not forest hills.

We need to have a registry of EVERYONE that purchases gasoline!
It would make it so much easier for the authorities to track this guy down

Not enough cops or fire marshals to find him. They'll be more......

Hey Ninja, please come to Little Neck next because we are nice Americans being over-run with "Asian box Crap" that needs fixing.

"We need to have a registry of EVERYONE that purchases gasoline!"

That's no friggan joke!!
True Value in Lake Success just demanded a scan of my drivers license to buy a pint of lacquer thinner for my airbrush.
--I told them NO FRIGGAN WAY . In states like NY your SS# and every dam thing else is embedded in that data strip on the back, even a code to access your police & driving records !!
In the wrong hands someone can steal (or sell) your identity !!