Is windfarming in our future? 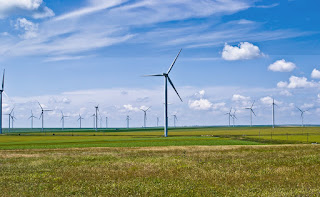 Some 20 miles off the coast of the Rockaways, the wind roars on the open ocean with enough force to power a large swath of New York City. And that is just how Clint Plummer likes it.

Deepwater Wind, where Plummer is vice president of development, is a Providence, R.I.-based wind-power company in the business of harnessing that force. The Rockaways are where he aims to build what could become the largest offshore wind farm in the U.S., with turbines that would reach as high as 500 feet and have wingspans wider than three Airbus A380s.

In its first phase, the project could generate enough electricity for a quarter of the state of Delaware. Eventually, it could include 500 turbines or more, with the capacity to produce a quarter of the city’s power.

Although a windmill-powered future may seem far off, it can’t come soon enough for Plummer, who is based in New York. Many of the Northeast’s power plants are at least 40 years old and nearing replacement, creating what Plummer says is a once-in-a-lifetime opportunity to transition the power grid from carbon-belching plants to green infrastructure.
Posted by Queens Crapper at 7:38 AM

I know that people who live where they MAY be able to see these windmills will complain, and there is some justification to that BUT, one of my greatest fears is the future we are leaving for our grandchildren.

Nearing 68 years of age, my future is not that long; our children, and their children, need a sustainable future. This of course means REDUCING our carbon footprint!

I am NOT a scientific person, and I am sure that there are issues related to natural gas, solar energy, and wind turbines BUT if in the long run, they provide a better future for the generations of my family yet to come, I will support these new technologies!

Put them on the rooftops of all the affordable housing building that are being built.

the Kennedy and Kerry families chased the wind farms away from their compounds.

B-but, but birds, and fish and stuff.

Can you elaborate? Why can't the surplus energy be stored in batteries for off-peak times?


The city could harness the flow and movement of the Hudson river by placing generators based in the principle of the Faraday flashlight by means of friction and electromagnetism.

Another way to get almost free energy is also harnessing the biogas that goes up to the atmosphere increasing the greenhouse effect, such biogas can be found in the biodigestors in all sewage water treatment plants all over the city. Nowadays there are electric generators that work solely on biogas.

Taking advantage of the excess heat that goes up in smoke thru manholes all over Manhattan would be excellent. Most buildings that leave their lights on should be forced to turn them off at night. LED lighting should be enforced all over the place.

Magnet technology has allowed us to design more efficient wind tunnels and generators that can be located on top of buildings without disrupting the environment.

Doesn't the state already get most of it's power from hydroelectric plants upstate?

We don't need to shutter conventional power plants, but having wind farms means they have to produce less, which means less emissions.

A car battery supply about 120 watts for 6 hours.

Also, wind generators typically run at only 30% of their rated capacity.
A 1 megawatt generator averages only 300 KW over the course of a year.

You don't use small, portable batteries (or any kind of potential energy cells) meant for cars in a non-temperature controlled environment for power plant purposes, though. Not saying that we could run the entire city off of renewable energy, but that's very different from saying we couldn't provide low cost power to poor people living in the Rockaways.

So you think you are saving the planet.

The electric car needs to be plugged in at night to recharge.

Where does this electricity come from?

most likely a coal burning or gas fired plant down the road.
[I am talking about the USA as a whole]

So all you did was move the tailpipe to where you cannot see it to a smokestack out of your view. I hope it makes you feel good.

As for the wonderful bird and bat Cuisinarts, in addition to the windmills chopping up birds and bats, they run intermittently.

The fossil fuel fired plant has to make up the difference, or LIGHTS OUT.

Regarding bird strikes, if you were to harm a bald or golden eagle, it is a felony and $250,000 for each one!


If you have a windfarm you get an exemption.

Not a good idea. Poor return for investment AND a major danger to birds. We have some major flyways that criss cross this area and Jamaica Bay Wildlife Refuge attracts a lot of birds. Would hate to think the poor things are being chopped up as they fly by.

Will make a great fishing hole with all the bird chum falling into the ocean.

I think the turbines are a great idea long overdue, they also look majestic. The drawback are stupid birds. But they also fly into planes too. Ask Sullenberger

Rockaway is going through a bit of a renaissance and creeping gentrification, even garnering celebrity interest. Which may be why this project is being considered, a lot of these people are environmentally conscious types, meaning conscious of their own environment and a way to feel good about themselves for it.

Solar is better and infinitely more safe. Why this resource is not widespread is a crime. And it can more easily be harnessed. The issue is yet again the costs, but when execs say that it's mostly because they can't personally profit from it and can't live opulently. Also recall when Obama decided to give a contract to a company specializing in solar power, they turned out to be a bunch of idiots with no sense for accounting.

I would love to see the financials on this - the construction costs - the operating costs - and expected revenues in order to understand at what point in the future, if any, this stops being a money loser and starts making money for its investors.

Farm it under the tails of politicians

"Not a good idea. Poor return for investment AND a major danger to birds. We have some major flyways that criss cross this area and Jamaica Bay Wildlife Refuge attracts a lot of birds. Would hate to think the poor things are being chopped up as they fly by."

Plus further destruction of winter flounder habitat, striped bass migrations (a species that hasn't recruited since 2004, according to NMFS) and a navigation hazard to cargo vessels in the most heavily traveled channel on the east coast (Ambrose Channel). A spill would potentially make the Exxon Valdez look like a driveway oil stain.

But I have no doubt the wind farm will eventually happen. Our stay-cationing, gentrifying new neighbors are oblivious to local issues. They draw more attention to themselves talking about climate change, which is what it's really all about for them, and they jump on these national trends like flies to shit. Not saying climate science isn't serious, just that it shouldn't trump our local environmental issues by default.

Now, I'm anxious to hear how Brangelina will tackle the problem of our overcapacity sewage treatment plants and the effect that anthropogenic nutrient enrichment has had on Jamaica bay...