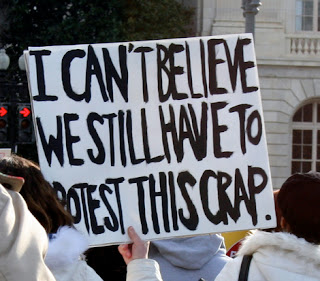 Steelworkers and plumbers union members demonstrated alongside groups like New York Communities for Change outside a new 50-unit construction project today in the swiftly-gentrifying Bedford-Stuyvesant section of Brooklyn, a development that—according to the architect’s website—will be 80 percent market rate and 20 percent affordable and receive financing from Mayor Bill de Blasio’s Department of Housing Preservation and Development. The umbrella organization Real Affordability for All used the occasion to drop a report claiming subsidized developers, most belonging to the New York State Association for Affordable Housing trade group, and their contractors have underpaid workers some $19 million since 2011.
Posted by Queens Crapper at 12:08 AM

No shit, Sherlock. Affordable housing is a scam.

From the working poor

“I was working for a company that didn’t care about my safety, I was working on average 78 to 90 hours a week in order to make enough money to support my family. Because of the low wages I could not afford to live there,” said Jender Orobio, who said he had walked off a job site in Manhattan that employed the controversial U.S. Crane and Rigging company, which the organizers claimed was working at the Brooklyn site.

Alicia Glen, Mayor Bill de Blasio’s deputy mayor for housing and economic development, told the City Council today that obligating developers who receive the controversial 421a tax break to pay construction workers prevailing wages could result in 17,000 badly-needed below-market apartments not getting built—and argued that the demand for low-cost housing trumps the call for union jobs.

This is why these abominable contractors can shit on workers with impunity. Because it's being enabled by conspirators fronting as advisers aka the Campaign for one new york (maybe THEIR new york) and this cabal New York State Association for Affordable Housing along with elected officials and appointees like our mayor and Ms. Glen. This affordable housing program/scheme is practically run by criminal enterprise collective running amok exploiting people and the homeless crisis under the guise of progressive programs. It's a kinder,gentler version of tweeding.

The biggest problem is that there are no rules to stop the abuses, and seemingly no justice.

And when there is neither, anarchy will ensue. It's called blowback.

"a report claiming subsidized developers, most belonging to the New York State Association for Affordable Housing trade group, and their contractors have underpaid workers some $19 million since 2011."

Alicia Glen appears to be one of the few deputies under deBlasio who's halfway honest or intelligent. Definitely only halfway, but in this administration, it's better than most.

Yep, it's amazing how bad the left is at economics. It comes form all the pot they smoked in their dorm rooms while beating off to Karl Marx.

and the affordable housing is for a select group of non whites.

More union jobs = more people that can afford housing. But then they would not be dependent on the big Democratic machine to give them handouts and might vote the wrong way next election day.