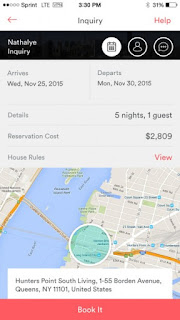 The Hunters Point South development, which tax-subsidized residents started moving into in May, is already being gamed for profit by renters using Airbnb.

Lottery recipients who received luxury Manhattan-view waterfront apartments, with the help of taxpayer subsidies, are now renting them out for as much as $500 a night.

A unit in one of the two Hunters Point South affordable buildings was highly sought after last year. More than 92,700 people applied to snag one of the 925 units that were on offer. The chance to win was 1 in 100.

“This is the best apartment deal in New York City,” Frank Monterisi, the senior vice president of the Related Companies that developed the building, said at a meeting last year.

The development contains amenities such as an outdoor roof deck, rooftop garden, a fitness center and a children’s playroom.

Three residents were found to be cashing in on their affordable apartment deal on the controversial Airbnb site earlier this week.

One tenant, who went by the name Nathalye, advertized her two-bedroom apartment for $500 per night, with the headline “Luxury Apartment with great Manhattan views.” With a cleaning and service fee, a five-night stay comes to $2,809.

The apartment is located at 1-55 Borden Ave. and can sleep up to six guests, according to the ad. The Venezuelan native, who moved to the U.S. three years ago, has two reviews, according to her profile.
Posted by Queens Crapper at 8:35 AM

The entire rent-stab/rent-reg/affordable housing system in this city needs to be scrapped, wholesale. But then again, this isnt news.

Wonderful. So the 90,000 other people who could have really used an affordable apartment are screwed by these people. This should be grounds for immediate eviction. These are supposed to be primary residences. Illegal subletting isn't allowed even in market rate apartments. These are the kinds of greedy a-holes who give the whole system a bad name are used as an example against everyone who truly needs these places. I wouldn't be surprised, though, if they were strategically chosen.

Fine the landlord! It's his fault the tenant is renting on AirBnB. DeBlasio should go after him for some fines.

This is what happens when Government gets involved.

They create a problem, then they fix the problem causing more new problems.

GET GOVERNMENT OUT OF MY LIFE!

We the People of the United States, in Order to form a more perfect Union, establish Justice, insure domestic Tranquility, provide for the common defense, promote the general Welfare, and secure the Blessings of Liberty to ourselves and our Posterity, do ordain and establish this Constitution for these United States of America.

So much for defending our borders.

If we did not have hundreds of thousands of illegals here flooding the labor market, driving down wages and/or sucking on the government teat, we would not have this discussion.

We need more affordable housing for the incoming Syrian "refugees"...

Venuzuelan native here for 3 years illegally rents out on AirBnB her 1 in 100 shot at a taxpayer sponsored "affordable" rental in overdeveloped Long Island City - this story is a goddamn caricature of every major failure in this city that Queenscrap is fighting against.

"The Venezuelan native, who moved to the U.S. three years ago"...3 years and already has a tax payer subsidized apartment. This is some great country.

Is that recent expenditure to pick up the D.O.B.'s deliberate slack by our stupid mayor paying dividends already?

This scandal confirms the bigger scandal of the systemic process of qualifying for affordable housing. The ratio to acquire a decent place to live is hideously outrageous. And it's goddamn clear there is no supervision going on in this complex and there will potentially be none when the other 80/20 421a glass tumors are finished. For these buildings are meant for airbnb, more of a criminal enterprise than an innocent startup every day. Is that venezuelan cunt the middle class they were defending when they were being grilled (more like garnished) at a city council hearing a month ago.

Don't be surprised if when these tumors are less occupied that in a desperate attempt for funding, and the NYCHA buildings as well that they will be bought by airbnb and will have their perverted logo digitally emblazoned on the top of them.

Don't also be surprised if the terrorists come dressed up like hipsters and exploit the lack of regulations and proper vetting of their shitbird hosts to assemble and plan their next soft target attack.

Interesting how they go nuts over the inevitable Queenization of the LIC development (can't wait for the first extended 3rd world family to rent an apartment and to start to use the common rooms for authentic 3rd world social events) while the poor forgotten people abused in Dutch Kills are getting evicted by greedy landlords who are subleasing rooms to AirBnB. I heard from a resident during the 'blood moon' eclipse a few months ago that the sidewalks were literally clogged with people that he never saw watching the event - no they were not the hotel residents - but came from rooms in the remaining housing stock. Landlords are making a killing while their evictions are adding to the homeless problem.