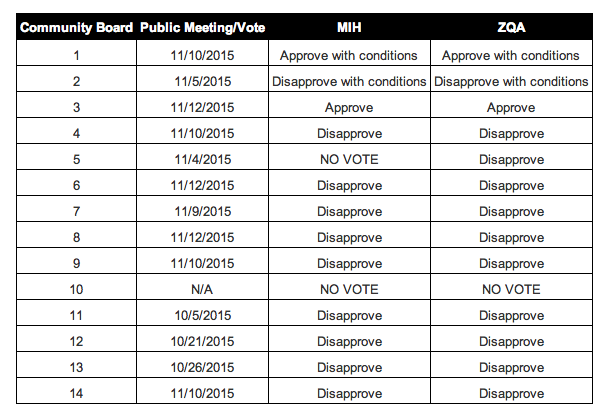 In a brief meeting of the Queens Borough Board, chaired by Borough President Melinda Katz (D-Queens), the members voted overwhelmingly to reject two City Hall rezoning proposals being considered city-wide.

The Zoning for Quality and Affordability, or ZQA, would essentially allow developers to build larger buildings to accommodate affordable housing. The proposal to create Mandatory Inclusionary Housing zoning, or MIH, would require affordable housing as part of any new development over 10 units. The ZQA and MIH proposals are central to the affordable housing plan put forth by Mayor Bill de Blasio (D-New York City) to build or preserve 200,000 units of affordable housing over a span of ten (10) years.

After the votes were taken by simple voice votes and the Borough Board meeting came to a conclusion, Borough President Katz made statements to the press.

"The next step is the Borough Board has voted to disapprove both amendments. And we look forward to discussing with the administration how we can improve these amendments, so that we can provide sufficient affordable housing in the City of New York."

Sound like Melinda is going to vote yes eventually.
Posted by Queens Crapper at 8:43 AM

I believe that before she became BP, she worked for a developer group, right?

You know darn well she will vote yes just as she will allow a weeklong concert to take place in FMCP. Damn the constituents and park-goers.

All this ass has to do is stop handing out free stuff and end this scantuary city policys. Most these bums, freeloader's, and single moms of 5+ (drinking beer & yapping on the free obama phones) will then migrate elseware.
This mayor is an asshole magnet, supporting 15,000 lifetimes of homeless people will bankrupt the city and destroy streets.

No upzoning without huge increases in transit, schools, first responder staffing, etc. Enough is enough with this "develop" everywhere bullshit.

Do not worry, they will shut down at least one more hospital before they start...

We have a mentally ill mayor and I'm surprised that so few can see this.

He is on anti- depressant meds . That's a fact.

Can someone tell me what is meant by " build or preserve" 200,000 units of affordable housing, over 10 years no less. Here is my example: let's say that if at the start of Mayor Wilhelm's term we had 199,599existing affordable units and at the end of his term we have 199,599 existing affordable units and 1 new affordable unit would we call this a success and a kept promise? I mean it adds up to 200,000 units.
This is unquantifiable progressive horse shit. The fact of the matter is there is no such thing as affordable housing. This is only government choosing the winners and losers by spending taxpayer money on affordable housing scams to line the pockets of politically connected developers. The free market would always provide the housing at market rates that people can afford.
The non producers in our society do not have a right to live in the most expensive real estate in the country at the tax payers expense. If the tax payers have to pay for the disabled, the indigent and the mentally ill we have a right to get the best bargain for our money and that means their housing should be supplied in the cheapest real estate areas, NOT NYC.
Just keep advertising $175,000 homeless units and new parasites will arrive faster than anyone can count them.

Can someone tell me what is meant by " build or preserve" 200,000 units of affordable housing, over 10 years no less.

"According to the 2014 NYC Housing and Vacancy Survey, there are about 27,000 rent controlled apartments vs. about 1,030,000 rent stabilized apartments," so says the Rent Guidelines Board.

de Blasio's plan to build or preserve 200,000 units of affordable housing is a sham, it is a joke, because the metric he is going by would basically mean that so long as 200,000 units of rent-regulated apartments remain at the end of the 10 years, then he's succeeded. What a very deliberately low bar by which to measure success.

But why shouldn't it come to us as a surprise that he'd pick performance metrics that can be gamed in this way ? He's using fuzzy math right out in public. A few weeks ago, Queens Crap drew attention to how City Hall could be cooking 311 complaints. I wonder what this says about how he's treating the city budget ?

de Blasio had it hard, bc he had to sign the municipal unions to long-term contracts. That cost the city a pretty penny. Recently, Cuomo's forced de Blasio (and rightly so) to pay up to help fund/maintain the M.T.A. Now, the homeless crisis is forcing City Hall to rightly pay up to care for people, who don't have shelter. Yet, rather than to save our parks and libraries and to save NYCHA, the mayor is unwilling to pay up to save those taxpayer properties, and, instead, you see him resorting to gimmicks to either sell them off or to get corporations to creep/buy into public assets. I think these gimmicks show that the city budget can't take much more. I'm all for trying to rebalance the economics of the city, but how de Blasio is carrying this out (as decided by his lobbyists, who, in turn, only back maneuvers that can support the skimming of their lobbying fees) is going to hit a brick wall within the next year. de Blasio was a fool to abandon the mansion tax, bc now he has no way to pay for all the unfinished business that no doubt Cuomo is going to keep throwing in his direction.

It was admirable that de Blasio cared about affordable housing, but the way he has gone about it has been completely disingenuous. He (and his lobbyists) chose to go the route where they would be at the complete mercy of developers, and, as most of us no doubt know from our respective experiences with big landlords, developers aren't known for their mercy.

For people, who really care about social and economic progressivism, de Blasio's machinations have set back the cause by decades. He's poisoned what the word even means, and he's misappropriated it as political cover for the lobbyist-friend dealings he's engaging in right out of City Hall. And it bodes poorly for his political future that grassroots advocates for tenants' rights can see through de Blasio's rezoning/affordable housing proposals. More and more people are able to see through the sham of his affordable housing math.