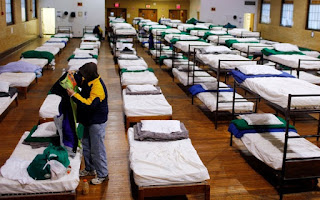 After squabbling with Gov. Andrew Cuomo over funding for supportive housing, Mayor Bill de Blasio today announced plans to move ahead on his own, launching a $2.6 billion program that will build 15,000 units of housing for the homeless.

“The City of New York is acting. We’re acting decisively. We are not waiting on Albany,” Mr. de Blasio said today at a press conference in the lobby of a supportive housing building.

Mr. de Blasio’s press conference today took on the tone of a campaign rally, with advocates for the homeless, mentally ill, substance abusers and veterans cheering him on as he discussed the need for housing that could help those vulnerable individuals get back on their feet. If there was an opponent to run against, it seemed it might be Mr. Cuomo, Mr. de Blasio’s most prominent political enemy despite their shared party.

The governor and the mayor have been fighting for months over the funding for the NY/NY program, which has seen the city and the state work together to provide supportive housing for the homeless. Mr. de Blasio went to Albany to ask for 12,000 units to be built over 10 years, but the state responded with an offer of 3,900 units over seven years, something the city deemed insufficient. But perhaps the bigger disconnect was over how much of the tab for operating costs each government should pick up—the city wanted to contribute just 20 percent to the state’s 80 percent, as it has in the past, while the state was calling for a 50/50 split.

Mr. de Blasio will now pick up the full cost of his own 15-year program to build 15,000 units, but he and others standing alongside him repeatedly called on the state to do more. That comes after Mr. Cuomo said the same of the city earlier this year. “I think the city should spend more,” he said.

The plan calls for about 7,500 newly constructed apartment buildings and 7,500 “scattered site units.” It will cost $2.6 billion in capital funds over 15 years, of which $1 billion will be a city cost. Of that, all but $380 million has already been budgeted through the mayor’s affordable housing plan, which includes funding for supportive housing. The remaining $1.6 billion in capital funds will be offset by low-income tax credits and other private sources, which the mayor’s budget director said today will largely be costs paid by developers. The city will also pay operating costs of $96 million through fiscal year 2019, starting with $8.8 million the first year and ramping up from there.
Posted by Queens Crapper at 8:47 AM

So, a place to harbor Syrians then?

"The plan calls for about 7,500 newly constructed apartment buildings ", please tell me they mean units not buildings.

HOW IS ALL OF THIS GOING TO BE FUNDED?

It's getting cold now, what does this doofus have planned for the next few months?

Who does he think is going to build all of this housing? It won't be Union wages.

How long before someone comes along to run against this clown?

Mayor Bill de Blasio today announced plans to move ahead on his own, launching a $2.6 billion program that will build 15,000 units of housing for the homeless.

But don't worry, Comrade de Blasio will do his best to ensure that the costs keep RISING!

And what about those saintly Syrian refugees that NYC will soon be getting - Where are they going to live?

"A billion here, a billion there, pretty soon, you're talking real money!"

I love how the "million" and "billion" words are used like dimes and pennies.

The points made by the Mayor confuse rather than clarify the issue.

And there is a bridge in Brooklyn for sale to pay for this...

please forgive the Comrade he has a public school education - so math his math skills are questionable.

then he studied metropolitan studies, and urban studies

then the students go out and implement them, ignorant that the theories are just that - theories, and destined for failure

If deBlas is making a 15,000 unit long term commitment I suppose he is admitting the Homeless Emergency is not going to get any better.

New permanent housing for the permanent homeless. You are a true servant to the Party Comrade deBlasio, your actions will not be forgotten. Socialism is the new 2nd political party in NYC. Bernie Sanders will have a job for you when he gets elected.

"Mr. de Blasio will now pick up the full cost of his own 15-year program to build 15,000 units". Correction, the NY taxpayers will pick the full cost. Even if Cuomo kicks in money it is still our money coming out of a different pocket. Working NYC taxpayers are screwed, twice.

The homeless definitely need a helping hand. As a society we stand to gain more than actually lose when give someone a second chance and allow them to integrate back into society, regardless of the cost to tax payers. However, we have to be rigid and focused in our efforts to address the problem. This means that Law enforcement must take complaints about the homeless more seriously.

I know that cops prefer to be called to the scene of a serious crime rather than a call about a cat stuck on a tree somewhere or someone losing an I-phone but when residents complain about public urination on their property, verbal intimidation by a mentally unstable individual, the NYPD has to act. Don't just give them a verbal warning and walk away, take them as far away from the situation as possible. After all, this is why we have homeless shelters. If the solution requires them to take them to a psychiatric hospital, then do so.

Check out this NYPost article:

I don't see the "No Second Term" banner/sign anywhere here, Crappy. How much more Crap by this bullshit mayor needs to happen before that goes up? Just curious.

The housing will be open to homeless families and adults where a family member has a serious mental illness, substance abuse disorder, is disabled, or has HIV/AID; young adults under 25 who are transitioning out of foster care; homeless single disabled veterans or families with a disabled veteran; domestic violence survivors; street homeless individuals in safe havens and stabilization beds; and individuals receiving nursing care

And what of all the former hotels turning into shelters? That's still a thing, right? Or has he given up on that?

"How long before someone comes along to run against this clown?"

Focus on Queens Boulevard slightly to the east of Union Turnpike. There you will find a do nothing Borough President who is salivating to move from Forest Hills to the Upper East Side and be the first woman mayor of NYC.

She will take on the boy mayor in the dem primaries and kick his ass.

Meet the new boss same as the old boss.

NYC is too expensive to live!! we cannot and should not house the homeless here! they should go to cheaper cities like Detroit, Newark, etc. give them a one way bus ticket and a sandwich, goodbye!

Nice of Duh Blah-Blah...spending two billion of my tax dollars to perpetuate our sanctuary city credo.
There was a time that a bum was a bum. Now we encourage voting bums to support Der Mayor's second term.

So how about all of those who were actually born here who make an honest living who don't really qualify for any affordable housing? Namely the ones who have one kid and makes 55k/year? How about helping the working class first? It was even proven that the half the citys homeless don't even come from nyc!

All the comments here are sufficiently detailed so I will just say that I am sick of those two motherfuckers, Mayor Big Slow and Mario's Son, representing the political party that is/was perceived to care more for people. Of all races and ideologies.

You just can't believe them. It's impossible.

Speaking as the true demographic for this bogus affordable housing scheme.

EVEN CELEBRITIES LIKE BROOKLYN BORN, MICHAEL JORDAN IS FED UP WITH THE HOMELESS SITUATION OUTSIDE HIS RESTAURANT:

De Blas-- Please move the old man with his 17 bags out of the subway station at 67th and QB, where he's been living for AT LEAST 6 years. Thanks.

Michael Jordon must be a racist.

Why is he hating on the poor underprivileged???

The National Park Service, run by the U.S. Department of the Interior, asks us, ‘Please do not feed the animals, The animals will grow dependent on the handouts, and then they will never learn to take care of themselves.'

“The food stamp program is administered by the U.S. Department of Agriculture, proudly report that they distribute free meals and food stamps to over 46 million people on an annual basis.”