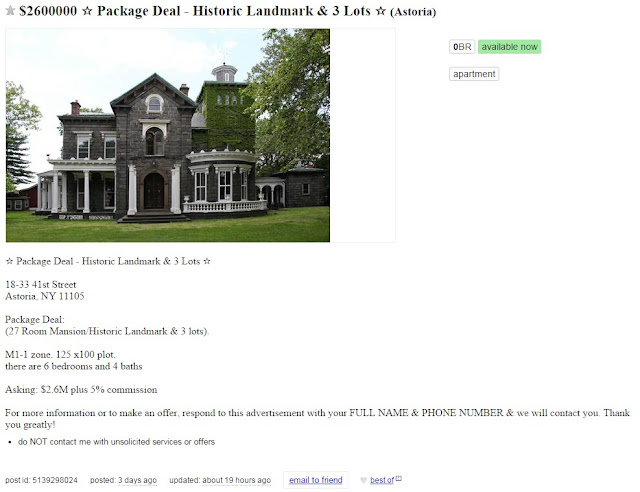 This was posted on Craigslist.
Posted by Queens Crapper at 12:54 AM

Exclusive. Evidence of paranormal activity at the Steinway site?

Now Bill De Blasio has an opportunity to take the money set aside for hipster dog runs and do the right thing....buy the Steinway site.
No excuses , please. His rating is in the toilet. Buying Steinway could buy Der mayor a lot of Queens votes. Think about it, Wilhelm.

Yes, the ghost of Horrowitz, Rubinstein, and all the rest of the great concert pianists who once tickled the ivories of a Steinway.
Either that , or a constant , tortuous banging of a child's keyboard exercise, "Chopsticks", played allegro all night.
Paranormal activity, indeed! "The Uninvited"!

P.S.
Now , would GAHS take a small suggestion?
Call Greg Mocker, channel 11, and get a TV feature scoop on the sale. Get some good publicity.
Yawn. Is that expecting too much?
I can make the call, little ol' me, but it would be far more effective if The Greater Astoria Historical Society picked up the phone.

Lord be praised. There is still hope.

Now is Constanople and Vallone's chance at Studio Square II.

I wonder if this is a bona fide offer. I mean, really, Craig's List?

Ya gotta be kiddin' said...

Mansion for sale AND 3 lots. 3 lots of what? Which 3 lots? There's nothing there but dirt. [See George's video above. Does the "ghost" come with them?]

Lord be praised. There is still hope.

There is no hope. The aesthetics of the site have been ruined by the carting away of the natural surroundings, i.e. the elimination of the mound. Now the Mansion will be surrounded by . . . warehouses. Umpteen of them.

A building this size fits on a 124 X 100 plot ?
Can you even park a car or plop a picnic table on whats left, perhaps this is a prank! Nobody's gonna buy that. Its going to end up a neglected rotting hardship for the owner that must already have cracks & holes in the roof and walls that will now never pass an engineers inspection to get a mortgage.

What does the inside of this place look like?
Could it be turned into an upscale catering hall and restaurant which would serve the hipsters from LIC and Williamsburg?
Three lots could provide plenty of space for outdoor weddings and dinners.

Nothing like Craigslist for selling multimillion dollar properties. I'm sure this is totally legit.

Caliendo. Bah!
He dares to call himself an architect.
I am ashamed to share an Italian-American heritage with this uninspired builder.
But, please do not call him an architect even if he's certified as one.
Architects are visionaries and leave a fine heritage behind.
Palladio was an architect. There was an Italian to be proud of.
It's all about scale, proportion and attention to detail.
Awaken me when you find this in any of Mr. C's work.

Vallone won't do squat. Has he ever done anything right to preserve the history of Astoria?
Old Astoria village....what's left of it....Pete Junior Vallone couldn't care less about.
He is only interested in the advancement of the Vallone dynasty.
History plays third fiddle with that avaricious family.

Between Vallone, Katz and Van Bramer....the axis powers of destruction....every inch of Astoria and LIC will be developed to the max.
When a developer's slut is the queen of borough hall, there is no hope. Melinda Katz gets most of her campaign money from destroyers of neighborhoods. If slut is to strong a word for her, try developers' courtesan.

Call Susie Tannenbaum at borough hall.
Maybe she can persuade boss Katz to take some interest.
It's either that or move the mansion.

Move the mansion?
Far fetched, but possible. The firm that moved Latimer House in Flushing,
had once moved a stone church on Long Island to a whole new location.
What would the cost be?
Lord knows!

Plant a living bamboo screen to hide Caliendo's folly.
A little Oriental magic could work wonders to hide his eyesore.

The problem with ugly architecture is that it's here to stay.
If an artist paints an ugly picture, it can always be confined to a hall closet.

Poor Astoria-LIC.
It is either situated on the water's edge, in a flood zone, or at the epicenter of an overdevelopment tsunami.
Protecting this most vulnerable location is a gang of cut throat politicians who are in bed with developers.

I bet one of two things:

2. the real owners (and not the front men) had a real buyer waiting all the time and wanted to make a quick throw the hood over the head and knife in the ribs once they were ready to go forward with the real plans.

C'mon. They wouldn't even move St.Saviour's in Maspeth and that was designed by Richard Upjohn. Politicians suck the big one. They only care about themselves.

Calm down people - this is a joke.

The property description is not only wrong but the building doesn't even look like this.

Pretty ballsy to use the Friends picture. Maybe they are behind this.

Uh...the idea of moving the mansion was a joke. Get it?
I know it will never happen.

And maybe the Friends are not behind it.
Maybe these Friends should have done more earlier.
Who are these Friends you speak of anyway?
LOL, Friends of Steinway?
Haven't they better things to gas about, if so?
Gut wind and fruitless attempts at preservation.
That's their speed.

As someone said, we should stop fighting with each other and fight against the leadership of Queens for making this Exhibit A as to why we are a laughingstock of the city.

To say that is the way they are and there is nothing that can be done is bullshit. Bullshit THEY write and we accept without thought.

Once again, there are no personal fights going on here, just some TRUTHS being presented about some do little too late historic preservation groups. If this shoe fits the Friends of Steinway....so be it.
To counter with posts such as , " bullshit" , etc. only displays anger at being outed as ineffective. It is extremely adolescent.
Who ever is guilty knows who they are and who is responsible for the downfall of Steinway.
DO NOT try to buy off a few truthful " loudmouths" to remain silent or. They are the Spurs in your side to force you to gallop ahead.
If you do not like criticism then let's see some results.

Right on!
Instead of hiding behind Friends of Steinway's skirt, shouldn't GAHS be fighting this fight up front?
They have longer term credibility than their infant creation, FOS.
Now let me get adolescent. Stop being such pussies!

I think somebody still thinks that Bob and I are fighting each other.
Once again...WRONG.
Bob, if you think I'm your adversary, say so , and sign your name and call me out.
All of my posts are signed.
10-4. Over and out.

The 2015 Historians Heebahobba: featuring "Sottovoce" Singleton, "Ruckus" Rotundi, "Oy Gevalt" Eichenbau, and "Irritatingly" Irritano. Feel left out? BYOM - Bring your own mace and jump in and join the fun. Broadcast on QPTV.

Be there or be square. Minors Must Be Accompanied By a Certified Nitwit. Overflow seating in the Blabbermouth Section.

The screening idea wouldn't be bad but the state banned bamboo!

I know I said 10-4, but I'm a stickler for detail.
Spell my name correctly, please. R-O-T-O-N-D-I...not "Rotundi". It has been made public often enough to warrant being correctly spelled.

A gladiator fest sounds interesting....LOL!
Net and trident or Thracian knife? Citified would be perfect....but for crooked politicians to be the spectacle. Yawn. I'd make poor sport.

Somebody still insists on hiding behind an alias when commenting.
In this corner we have "Rukus Rotundi" and in the other corner...uh...who is that other contender who challenges me?
I am enjoying this bit of comic relief.

Can you imagine the variety of bleecher creatures witnessing a gladiatorial combat between shady politicians at Shitty Field?
Now, there's your Queens tourism draw! What box office that would be.

Thank you Brutus Rotondi. You forgot to mention the error which I hereby correct: Oy Gevalt EichenbauM