A new LaGuardia on the horizon 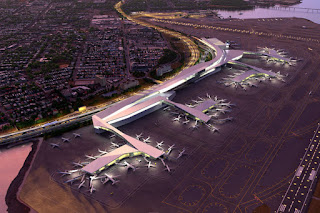 La Guardia Airport, whose dilapidated terminals and long, unenviable record of traveler delays have made it a target of jokes and complaints for decades, will be completely rebuilt by 2021, Vice President Joseph R. Biden Jr. and Gov. Andrew M. Cuomo of New York announced on Monday.

The Port Authority of New York and New Jersey, which operates the airport in northern Queens, estimates the overhaul will cost about $4 billion, most of which will go toward tearing down the Central Terminal Building, rebuilding it in place and augmenting it with a grand entry way.

The project “replaces the airport in its entirety,” Mr. Cuomo said at a Midtown Manhattan luncheon for the Association for a Better New York. He said that airport officials and planners had concluded that there was no way to fix La Guardia, that it essentially had to be torn down and rebuilt. With no place to create a substitute anywhere near Manhattan, they decided it had to remain crammed between Flushing Bay and the Grand Central Parkway.

Travelers would also have better options to get to La Guardia; Mr. Cuomo said the plan called for a rail link between the airport and a subway station in the Willets Point section of Queens, as well as re-establishing ferry service to the airport.
Posted by Queens Crapper at 12:34 AM

suspect it will wind up costing double that.

makes you wonder where all the money goes.

Can Joe Biden please fly into Kennedy, too?

They would have never even touched that airport if joe didn't come here and point out what shit it is! The whole neighborhood around it is shit too! I wish he would have taken a walk around all of queens to see what kind of filth queens actually is and its only getting worst due to his and Mr obamas "I love illegals and third worlders" campaign!

They are talking about having 1/3 more flights per year. Can you imagine how much more noisy our skies will be when the airport is done?
We would be better served if the state helped NYC build some new subways.

Where will the rail link be built, across Flushing Bay? Doesn't matter, probably never happen anyway.

What a cash cow this will be for the "Honest Graft" Queens politicos!

With more flights, maybe even 24-hour schedules, we will be experiencing even more intolerable noise from planes flying even lower and closer to our homes. Not something to rejoice about.

Why use our Tax money to build a private airport ?
And some people complain about the small potatoes being spent on bike lanes while this project will cost many of billions of $$$ ! What a waste of tax payers money.

I bet it will get fast tract without any local input.
No environmental studies and Queens will get more noise and air pollution.
Why not build some bullet trains like we've heard about for decades and decades !

Closing LGA would be a better and cheaper idea.
It is too small a space for modern air flight operations no matter how it gets reconfigured.
Use it for small commercial travel and freight transfer.
You can never make a JFK or Newark International airport
out of such a postage stamp footprint.

Get subway into LaGuardia and the plan would be complete. Stop wasting money on the AirTran to Willets Point. Waste of money, effort and resources.

Just wondering if the "FALN" can bid on the demolition contract?

Who the hell would want to ride a ferry to LaGuardia? And why not have the subway run all of the way out there? AirTrain To Willets Point? Useless! If they insist up an AirTrain, shouldn't it go to Woodside? That's make it accessible to both the subway and moe of the LIRR than just the Port Washington branch.

I agree with the first anon, it will cost at least double the estimate and will never be really finished. Unfortunately due to shitty planing for the last 70 years there is no place for a properly sized modern air port. Maybe it would have more helpful if crazy uncle joe had taken a walk through FRUSHING on a hot day and got a wiff of the rotting wood waste and cooking grease that is being dumped in the sidewalk gutters every day that no one seems to want to crack down on. Excuse me I'm getting nauseous agiain.

"Just wondering if the "FALN" can bid on the demolition contract?"

You have a good memory. I missed the bombing at TWA by 24 hrs. Arrived on Thursday. Friday evening where I had been standing BOOM.

Upon reading the PANY website and the websites for the consortium behind this plan, it looks like the deal was struck back in 2013. The present demolition of some of the old hangars is part of that plan. Its just that now the Governor is getting mileage out of the deal by appointing a board to oversee some of the planning.

I question how the consortium members were picked and what are they getting in return for their investments. Picture contracting with some company to replace a publicly owned bridge in exchange for letting them put a toll on it to pay themselves back... How much will the toll be and how long will they be able to collect the toll? Will the toll continue only until they're paid back or forever?

Beyond the physical planning here the public deserves to know the financial arrangements.

The entire borough of Queens IS a third world country. Who ya kiddin'?

NAIA Lite Redux
, I tell ya!

The rail connection needs to be a single seat / no transfer ride to midtown - otherwise it's still a third world airport.

I agree, close it or move it to one of the islands

GD "The entire borough of Queens IS a third world country. "

The entire borough of Queens IS a turd world country.

Closing it or leaving it as is: I just can't decide which idea is more stupid.

ref:14/17 if one wants more info on the bombing of LaGuardia TWA baggage terminal on 12/29/75,search : on the internet or Wikipedia. I to was there before the crime and after,shuttling relatives to my step-father's wake in Flushing. the damage was devasting. no group was ever charged or convicted ,but the F.A.L.N. was building bombs in a house in >Elmhurst across from tairport. Willie Molost nine fingers , and was broken out of Bellevue Hosp prison ward. Mexico would not extradite him to the U.S . he has lived in Communist Cuba since. his pal in crime was Lopez ,who Obama is going to pardon in Nov. see "DAYS OF RAGE" B.Burroughs

Tough subject to comment on but here goes: As a lifelong (67 years) Jackson Heights resident, the increase in air traffic will be tough, but hopefully, MAYBE, they can figure a way to have more flights come in and take off over the water. The one landing pattern that comes in right over the Grand Central Parkway is the worst, as the planes come in so low over many homes in Jackson Heights. Anyone who lives under this flight pattern knows what I mean....

On the other hand, let's face it.... LaGuardia is here to stay; it's NOT going to go away. So why not try and make it better. All of us who read this blog do so because we care about Queens, and are discouraged and upset by what it has become. In my mind, let's hope that the powers that be finally do something right....

And finally, a confession: as a young teenager, my friends and I would climb the landing light stanchions/towers at night, stand at the highest point with upraised arms, and see who would be the last to "duck" as the planes roared in overhead. Sure.. the planes were still at least a hundred feet overhead, but they sure scared the shit out of me. Almost blew us off our perch; more "prop" planes back then. Stupid stuff you do as kids.

My parents would have killed me if they knew....