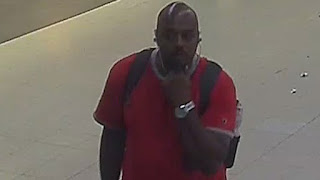 Police are looking for a man who they said attacked a security guard at a Queens casino before taking off in the victim’s car.

The suspect walked up to the 66-year-old guard around 7 p.m. last Saturday near the Resorts World Casino and assaulted him, police said.

During the attack, police said the victim dropped the keys to his 2008 Lexus. The suspect grabbed the keys, jumped into the victim’s car and took off, police said.
Posted by Queens Crapper at 12:44 AM

Another of those Amish behaving badly folks.

I mean what assholes thought that dumping a casino in the ghetto capital of Queens was such a good idea, I mean you had no foresight, not intuition, not little voice saying “bad idea”. No one said “A casino in the ghetto, ah not really a good idea”. But the powers to be, including some of our asshole elected officials gave it the go-ahead.

I still am not sure that all the money being dumped into Jamaica is really going to change things, if some of the same shit still exists in the community. I mean you can take the person out of the ghetto, but can you really take the ghetto out of the person.

I hate RW. I just really truly do.

Also, wait, a security guard can afford a Lexus? I must be in the wrong line of work.

We can all thank Albany criminals, Andrew Cuomo and Joe Addabbo for this debacle of epic, humanitarian fail! But, the endless flow of cash that pours into state government by a foreign gambling mill like Genting was too insidious to pass up---except, that all oppressed residents of South Ozone Park paid the price for this experiment in terror, that has proven to be nothing more than yet another failed model of social engineering, where it's political sycophants (that would be Cuomo, Addabbo, and possiby another tragic pipsqueak fool, who barely squeaked by with scoring a seat on the city council, Derelict Ulrich), already knew that it would 'knowingly fail' its constituents with impunity---and they STILL took no action to reject another failed, societal casino, which is the REAL crime here!

Because, gambling itself is regressive and cannibalistic: Regressive, because when a player's money runs out (and it always does, according to the odds at this foreign flop house), then a sucker, I mean gambler, then dips into other untouchable funds (i.e., car payments, mortgage payments, college trust funds, etc.). And, when that money supply is finally depleted from those sources, then the cannibalism theory emerges, with a vengeance (i.e., lying, cheating, stealing), that leaves a person totally bereft, when they could have invested that money into many other funds that are actually income producing---and guaranteed so!

But, according to a vile, vapid and vacuous cradle-to-graver like Addabbo, everything is just fine, and he himself said so in 2010, when he laughably told the media that the soon to be arriving casino in South Ozone Park would be a great and necessary fit for the community, and it would likewise help local businesses to flourish, by way of the new, visiting patrons and their ability to seek goods and services! What services---everyone is broke when they leave the gates of this vomitous, casino hell???

No, Queens Crappers, I did not embellish any of what Addabbo stated, verbatim, where it's nearly five years later, and southeastern Queens looks more like the Fourth World (never mind the garden variety quaintness of Third World beggary, obscurity, mediocrity and quiet desperation), than at any other time in history---complements of our derelict, self serving, state government sanctioned gambling mills like Genting---which are the only two jackpot winners here!

And, that's why gambling has never worked, still doesn't, and never will! But, hey, when Genting pulls in $8-10 million per week, what's not to like (except if you are one of the thousands of people who gamble and lose there daily, who can't even afford to gamble in the first place)!

Gambling equals loss of income (regressive), and the loss of other people's savings and incomes (cannibalistic)---always and forever!

Shut this dungeon down right now---and start creating REAL jobs, that pay REAL wages that keep pace with inflation, Andrew, Joe and Derelict Ulrich---and there won't be a need for desperate, foreign gambling mills at all!

File under Automobile Equality, income Equality and any other Equality you can think of.
I'm sure the guy in the picture asked nicely for the car and was turned down,don't you agree

I'll bet that nice Rolex he's wearing was a gift of persuasion also!!

Grrrrreat! The protector's car gets robbed. Some security.

That scummy thief probably lived in Far Rockaway until the Hurricane then he cried to a someone at welfare, got himself relocated to Rockaway Beach. That's where the white people are. or were. Look for him in Rockaway Beach.

The robber is such an idiot I bet he goes back to the casino.

Joe Moretti, and in the case of the Jamaica residents, you can't even take the person out of the ghetto--where else can they afford to live?

Julie, they can afford to live in places that actually have jobs and lower cost of living. NYC is not one of those places.

This has been a very bad year for law and civility. Exacerbated by this den of iniquity Resorts World, which is just a glorified video game arcade bankrupting their patrons. Financially and morally.

To keep up with the theme, I WAGER that this scavenger had a bad day and was lurking around the lot for the opportunity. This guy acted no different than a raccoon pouncing on garbage. This comes after the restaurant riot, some dope leaving her child in a car, two shootings, and that copper heist on the train tracks not even a quarter mile from the dump.

Great exemplary comments by Joe and Richard by the way. The latter should be spray painted on the glass walled sidewalk leading to that dump.

A security guard owns a Lexus? How do I get that job?

Just put a lock on the gates, charge an admission to view in, and change the sign to "ZooWorld"

That is well said, Anonymous!

The hyper-corrupt politicians of Queens County (as with everywhere else), are now an entrenched, vile, vapid and dangerous scourge, who are collectively responsible for 'DEGRADING' our neighborhoods, instead of 'UPGRADING' them! Worse, the systemic corruption of a foreign gambling mill in the already oppressed and blighted neighborhood of South Ozone Park, is an instant invite for endless criminal activity, debauchery, prostitution, violence and all manner of depraved, human (or subhuman, as it were) dysfunction---as has been abundantly evidenced---and, as we previously WARNED in advance of the Racino's unwelcome arrival, to all failed leadership, who disputed such an unconscionable outcome could ever prevail upon the property.

Once again, these predatory, social ills are complements of your Senator, Joe Addabbo, in cohort with a descendant of Caligula himself, Andrew Cuomo---where neither troglodyte has to pay the price for this proven disaster of social engineering (that never provides any pretense of welcome, well paid, job growth and development---and where the ONLY proven winners are GENTING and Albany themselves---again, still, always and forever), where selfish, evil city and state government predators are once again (and still) rewarded for monstrous, humanitarian fail!

So, what's next for the attraction of fresh, transient vermin to infest the Racino, Jaunty Joe and Andrew (where the outside logo on Rockaway Boulevard resembles Edvard Munch's 'Scream' of 1893)---legalized midget bowling and cock fighting?

Shut down this false, fake, failed foreign gambling mill (not to mention violent, insidious---and, now lethal and deadly!), forthwith, and then quickly step aside in order to allow impeachment proceedings to promptly proceed for the both of your corrupt and cowardly-delivered records, to finally end in rightful disgrace!