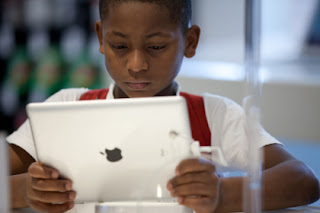 Mayor Bill de Blasio and other officials announced the initiative Thursday at the Mott Haven Houses in the Bronx, 1010 WINS’ Mona Rivera reported.

U.S. Housing Secretary Julian Castro said the federal government will help the city with the initiative. Also, private companies are donating technology, including Sprint, which will make mobile Wi-Fi devices available to NYCHA households in the Bronx with school-aged children.

So the projects are literally falling apart, but at least the residents can sign into Facebook. Great priorities here.
Posted by Queens Crapper at 12:42 AM

I am sure everyone, since there are no alternatives to standard telecommunications, in the projects owns a smartphone (except the elderly I think) and already has access to the internet. How else can certain people post their exploits like gang-banging and mcdonalds beatdowns online for example.

Mayor Big Slow and the tone-deaf officials at NYCHA just don't give a shit or maybe are stupid enough to think wifi can materialize into a force field and shield the buildings from rain,wind,snow and mold.

Tracking perfectly the decline of civilization.

"Oh look at the good we are doing, bringing civilization to the darkies".
This is the ultimate tokenism. How about fixing up the buildings, providing security, improving the local schools?
This electronic "big fix" is another boondoggle.

Seems to be designed to distract the NYCHA residents from noticing how shitty their apartments are. Waste of money. NYCHA is so inept/corrupt that it will figure out a way to screw this up too.

We need totally free wifi from the public libraries

Is there no end to the Government (City+Feds) pissing away our tax dollars? What is next, free iPads and cable? No politician understands that there is no such thing as a free lunch and we are getting tired of paying for someone else's lunch while we eat peanut butter. This must stop, FAST.

I wish the taxpayer would pay for my internet access.

What suckers we are.

Yes they will get all that FREE the Dems need the votes, I wish I had FREE internet to apply for all my FREE stuff cause you have to apply online for the benefits(cellphone, food, housing befits, medical, metrocard and more)Oh, I have to post my cop beating, and text my baby daddy at rikers. You expect me to pay for this.

Go to the Library they have it.

theres a mentally handicapped man who lives 3 houses down from me.

Anon#7. If you would rather be handicapped than work for a living perhaps you are mentality handicapped.

Anonymous said...
theres a mentally handicapped man who lives 3 houses down from me.

You have a future. That mans future is limited by the handouts he receives.

you would have been better born disabled? really? you sound extremely cruel. depending on the handicap, some people (NOT all, but some) simply cannot work. they just can't. don't you think if you had a mentally disabled kid you would be worried what would happen to him/her once you were no longer there to support them?

most people with handicaps just want to be normal and do normal things like have a good job and be able to provide for themselves, and have a family of their own to enjoy.

of course there are people who scam the system. but to wish you were born with a handicap, or think you would have been better off with being born handicap is completely disgusting. walk into any special education classroom, or a school for autism, get to know their lives before you say those kind of disgusting things.

Seriously, I have no problem providing charity to those who CAN'T do for themselves. It's the able bodied who are gaming the system that I have an issue funding.

Yeah, give them free Obama laptops and our homes too !!
I cant believe the shit thats going on, get a load of this piece Drudge report and the NY Post just blew the lid off.