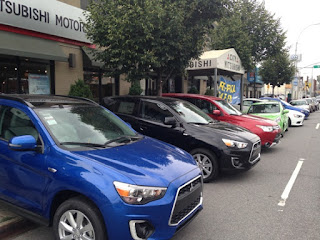 Car dealerships are displaying their vehicles on the sidewalk along Northern Blvd and street safety advocates are sick of it.

Angela Stach of Transportation Alternatives and Cristina Furlong of Make Queens Safer, two pedestrian safety advocacy groups, have spoken out against these dealerships, stating that this practice creates a danger for pedestrians.

Both stated that these dealerships force pedestrians to walk around the vehicles, often into the street.

“It puts pedestrians in the very dangerous position of having to walk into oncoming traffic in the street,” Stach said. “Especially on Northern Boulevard, which is one of the most dangerous streets in Queens.”

There have already been a number of pedestrians hit and in some cases killed by vehicles along Northern Blvd, including an accident that left five people injured after a Mazda sedan struck them at a bus stop on Northern Boulevard and 48th Street, in February, 2014. Noshat Nahian, an 8-year-old heading to school, was struck and killed in December of 2013, while crossing the intersection at Northern Boulevard and 61st Street.

While the practice of dealerships parking on sidewalks had nothing to do with these incidents, “these dealerships along Northern Boulevard put more people at risk,” Furlong said. “It is really insulting to see nothing get done.”

Furlong said that there are over 20 dealerships and garages along Northern Boulevard from 40th Street down into the 60’s.

Funny how people have been compaining about this for years, but it's only when Transportation Alternatives gets involved that it's considered newsworthy.
Posted by Queens Crapper at 8:02 AM

These dealerships are literally blocking vehicular traffic on Northern Blvd during the morning rush hour. Traffic has to merge from 3 to 2 lanes creating backups and dangerous conditions for pedestrians. Tow them away! And triple-fine them!

someone should send some kids on scooters riding on the sidewalk. accidents happen

I see this all the time. You see it. Everyone does BUT the precinct patrol car doesn't? The cops can't get out and ticket? Their Commanding Officer tells them to ignore the blatant violation of the law? The dealers are bribing the cops?

Where are the police/parking enforcement on this?

How is this allowed?

Suggest this post be sent to the Precinct Commander, 1 Police plaza,
and a CC to the NYTs, NYPost, NYDN. While the papers may do nothing, the mere fact
they were copied will likely get the cops to do something.

Also look at the Toyota & other car dealerships and car repair facilities on Queens Blvd. between Hillside Avenue and Main Street. These businesses take up sidewalks to which they have no right and cause pedestrians to have to endanger themselves walking around them into the street. They take up legal parking spaces all day and all night so that people who need to visit other businesses have to go quite far sometimes to find a parking space. Why are THEY not being ticketed? They are a chronic problem, it's not like they just do this for 5 minutes/day.

Community Boards, NYPD, and DOT need to get on this long ignored problem and solve it once and for all!

This is an issue throughout the city, and IMO far more worthy of broken-window style enforcement! I am told the patrols can't do enforcement because they might get called for a "real" crime! BS.

America... well on it's way to joining the Third World (or maybe the Second World?). This is what you'd see in SE Asia or Eastern Europe. Good job libs.