Ridgewood community garden getting kicked out 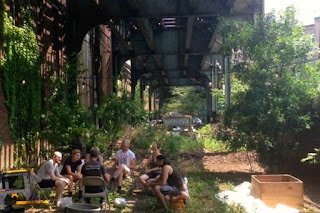 A group of Ridgewood residents was so frustrated with a trash-strewn abandoned lot beneath the elevated M tracks that they decided to clean it up, replacing weeds with tomatoes, sunflowers and watermelons and turning the space into the area's first community garden.

But the MTA's New York City Transit Authority, which oversees the space, is now in the process of kicking the group out because its members were never given permission to use the land in the first place, the agency said.

The group said it decided to take care of the space, located between Woodward Avenue and Woodbine Street, not only because it had become been an eyesore and a vermin-attracting dumping ground, but also because the neighborhood lacks and desperately needs green spaces.

But in late June, after someone illegally dumped debris at the site, the New York City Transit Authority changed the locks on the garden's gate without warning and posted a sign that trespassing is a violation, Fitzgerald said.

Can plants grow under an elevated train? And how filthy is it with a train passing overhead sending debris down below?
Posted by Queens Crapper at 12:04 AM

Setting up shop on property that you don't own without the written permission of the owners is the equivalent of me cutting my neighbor's fence and announcing that I will be pitching a tent in his yard. There are legal ways to lease land from the MTA for a community garden. Squatting is not one of them. It makes them look like the entitled spoiled brats that they may or may not be. Eating a tomato grown in the paltry sun coming through the railroad ties? I'd like a side of creosote with my salad please....

While I am in favor of community gardens where the landlord has given permission, this group has taken it upon themselves to put a gate in the fence surrounding the property and use the land for their own purpose. This is just a land grab. If they can't control their need to be urban farmers I suggest they buy a home with a yard.

While what they did may not be legal, and is seems that it is certainly unsanitary at the least and downright dangerous to your health, I understand their frustration and have to give them an A for effort in at least trying to make their neighborhood LOOK a little better....

MTA does something right for a change, these hipsters think they are either infallible and immune to toxins. How else, despite the superfund status of areas and prospective superfund sites (think about that gas pipeline off the shore in Rockaway and their "discovery" of Fort Tilden) they decide to move to areas by the Gowanus canal, Newton Creek and incidentally open up a bar in Ridgewood that once housed a chemical plant. And let's not forget their bogus boating club in Greenpoint and the Barge Bar there too.

What's funny about these environmentalist posers is you can clearly see a big dumpster not far from them. These dopes think they are enlightened progressives but are no different than the most revolting of white trash. Good thing this was stopped before it was turned into a bar/restaurant/coffee shop

jQ - you're fighting a losing battle. Urban centers are and have been popular with the younger generation for quite some time now. They are moving into urban centers all over the world. You can call them hipsters all you want and you can blame them for gentrification all you want. I'm too old to be a hipster, whatever that definition may be. But, for the most part, I like what the younger generations are bringing. Either way, we live in a relatively free country where people can choose where to live - and how to live. Crying in your beer isn't going to help.

Trolleys also ran on that right of way below the tracks before the M was built. Back in them days asbestos, lead paint, capacitor & transformer oil and all sorts of nasty stuff with 500+ year half life's was used in the undercarriages. Add MORE toxins from when the elevated was built.
That soil is without question contaminated much worse then people even think.

The stuff dropping from the train now would be garbage, iron powder and highly toxic magnaflux residue they use to check the rolling components for cracks. Machinists working the magnaflux machines at the Coney island yards are dropping like flys from cancer. Keep in mind the MTA does not follow OSEA guidelines. It does whatever it wants and tells people whatever it wants.

MTA dont give a shit about hipstes but DOES care about HUGE lawsuits. They know that ROW between Palmetto and Fresh Pond is highly toxic and has never been cleaned up !!

I love heavy metals in my tomatoes

Occupying the ROW might be a good way to get the city to clean up toxic sites.

Why are all these media people and yahoos from east of the Hudson calling this "Community Green-space" when in fact, without question of any doubt its PRIVATE PROPERTY ?
To add all the homes in that area have big back yards, plenty of space to grow things. These "urban farmers" must be SQUATTERS. I wonder what they are using for a toilet and sleep space ?

"jQ - you're fighting a losing battle. Urban centers are and have been popular with the younger generation for quite some time now. They are moving into urban centers all over the world. You can call them hipsters all you want and you can blame them for gentrification all you want. I'm too old to be a hipster, whatever that definition may be. But, for the most part, I like what the younger generations are bringing. Either way, we live in a relatively free country where people can choose where to live - and how to live. Crying in your beer isn't going to help. "

I refer to the 5 of the last 6 anons for your retort, quitter.

This isn't an urban center, it's a hangout. If there weren't fruits, vegetables, plants and a shitload of miracle gro, there would be broke and homeless people looking for shade.

The MTA pretty much locked it out of spite just to kill their effort and their joy, but those creative types don't own it. A better way to improve conditions, if you seen Joe Moretti's videos, is just to get some machetes, brooms and trash bags and clean the area. Maybe write to the EPA or whatever regulatory agency that can levy fines on the MTA (wishing too much I guess) so they can fill and maintain that space properly.

And these younger generations, despite their progressiveness are bringing down communities and aren't really contributing shit (except fertilizer in this case). If they did, they would have been fighting greedy landlords and developers in Williamsburgh or whatever trendy town in Brooklyn Goddamn to keep rents attainable for all classes and not packing their bindles and populating Ridgewood, ruining it with their feeble presence and dubious good intentions.

And the beat goes on

It wouldn't shock me if Mayor Blaz tried to spot-zone and cram cement HUD barracks under the M. Ridgewood, MV & Glendale have been moving behind the 8 ball for blockbusting for quite some time. The homeless shelter and census workers aggressively pounding on doors was part of that.
The mayor and Obama say areas like this are too middle class white and have to be changed.
Not a joke See:

JQ - ridgewood is certainly part of an urban center. "Occupying" is not a bad strategy. As we can see, it brings controversy. Controversy is good and can lead to progress. From what I see, our younger generation seem to be quite active in community service and politics. Occupy Sandy, for example, was an amazing and commendable effort by thousands of young progressives (dirty hippies). There's a dearth of green spaces in Ridgewood, imo. The city should definitely work with the community regarding vacant or abandoned spaces. As for these young creative types bringing down a community, I'm no so sure about that either. I would blame gentrification more so on "free market" economics, supply and demand, and 1% control. I think you're barking up the wrong tree.

No one from the area actually has access to that space so IDK why it's called a community garden.
I never see many NYers and hardly any ethnic people around that space. A woman from that very block asked me why people drank there all the time, and I had no ida, as did anyone else.

Thy shouldn't label it something it isn't just so they can have a drinking spot.

They claim they weren't going to eat the vegetables, just use them to draw toxins from the soil.

But man, when you get the munchies, who knows.....

""Occupying" is not a bad strategy. As we can see, it brings controversy. Controversy is good and can lead to progress. From what I see, our younger generation seem to be quite active in community service and politics"

"As for these young creative types bringing down a community, I'm no so sure about that either. I would blame gentrification more so on "free market" economics, supply and demand, and 1% control. I think you're barking up the wrong tree."

Playing the "Occupy" card, anon? Where is OCCUPY as all these tumor blade runner towers that are plaguing the city and the boroughs? Why don't they camp in the lots and challenge these greedy developers and the elected officials?

There is going to be an interactive map exposing all the areas that have been occupied by creative types in Brooklyn and Queens for "free market" purposes like bars, cafes and restaurants coming out soon, which was the point I was making in my comments about these people and the willful obliviousness they exhibit when they congregate and in the process inflate the cost of living in these parts. Hopefully it will confirm and legitimize my theories about these people's intentions the stupid risks they take and their concealed greed.

If you think these citizens that created that garden are revolutionaries or progressives, you make be barking up the wrong tree yourself sir or ma'am