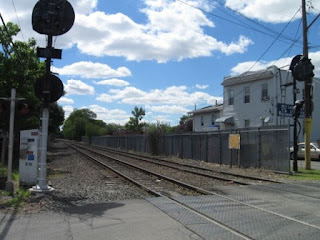 Commuters in Glendale and Middle Village deal with limited public transportation options. Most residents in both communities live a mile or farther away from the nearest subway station, and local bus lines through the area have a reputation for being slow and overcrowded.

City Councilwoman Elizabeth Crowley hopes to change this situation with a plan to introduce light rail service between Glendale and Long Island City on the Long Island Rail Road’s Montauk branch, which currently offers only freight service west of Jamaica. She hopes to pitch the idea to the Department of City Planning in the coming weeks.

In an exclusive interview with the Ridgewood Times on Monday at her district office, Crowley said a new diesel-powered light rail line would address the transportation needs in Glendale and surrounding communities. ***The light rail line could also encourage redevelopment of underutilized industrially zoned areas adjacent to the line for business or residential purposes.***

Crowley doesn’t suggest rebuilding the former Glendale station, but rather creating a new stop at The Shops at Atlas Park, noting that the shopping center—where her district office is also located—could serve as an active park-and-ride option for local residents.

“If we were able to get a rail here, people could potentially use this spot as park-and-ride, or the community around us could take a bus to the train or walk to the train,” Crowley said. “It provides options for public transportation that would effectively get more cars off our streets.”

She also pointed to an area near Flushing Avenue in Maspeth as another potential station site, noting that it’s close to the connecting LIRR Bushwick branch, another freight rail line that Crowley suggested could potentially also accommodate light rail service.

We all know Atlas Park isn't doing well and that Liz's friends, the Argentos, recently opened a soundstage next to Atlas Park. So it's interesting that she admits that she wants to boost their real estate value by building a light rail station there. But I guess she forgot that there are 2 at grade crossings west of Flushing Avenue, which a light rail to LIC would be forced to pass through, including one which just experienced a serious collision this past week due to a malfunctioning signal. And where are all the freight trains on the line going to go? Freight traffic is increasing, not decreasing.
Posted by Queens Crapper at 9:05 AM

I wonder who paid Crowley to say this, the Argentos, Hemmerdinger (the ex MTA chairman who moved bus routes to service his properties at Atlas), or the Mayor who wants to put low income housing in the manufacturing zoned areas. Just another example of the developers buying the politicians so they can make big bucks while changing the character of the neighborhood. Hope everyone in Glendale and MV has a place to park their cars because the street parking will fill up faster than the pay lot at Atlas.

“A light rail is inexpensive, it’s clean and it’s quiet,” Crowley said... Since when is diesel power clean and quiet?

Like all false, fake and failed politicians, this 'made' impostor is exactly why the entire system is corrupt, and rigged for failure in the first place!

Crowley can not be trusted; she is an inveterate, pathological liar, and she likewise doesn't follow through with any of her assurances and promises.

Case in point: When it was popular to take a stand against the unnecessary and unwanted eviction of 'Triumph of Civic Virtue,' on December 8, 2012 (after I revived the fight to clean and conserve it, four years previously, on June 8, 2008), there was Crowley herself, standing tall and impressive, right next to the other now defunct con artist, Peter Vallone, Jr. (when he lost to Melinda Katz for borough president in November, 2013, out went any fight and overnight urgency, to conserve and preserve our beloved statue, for whom Vallone himself personally claimed to have a passion to save---now, he's working in state government [AGAIN and STILL], with the rest of Cuomo's misfit, dysfunctional, political hacks, who consider lunch and a manicure a stressful day, as reward for their previously failed, or termed out public positions.

Then, as soon as Vallone dropped out of the 'Civic Virtue' statue debacle (like it was radioactive!), then Creepy-Crawly-Crowley naturally slithered away, too. Then, I got stuck with her 'Friends & Family' privately hired staff, like Rocco Paprocki, who jerked me around last year (like he was avoiding a debt collector), and this is why there really should be impeachment proceedings for failed public servants, many if not all of whom recklessly dishonor their constituents by practicing 'selective' and 'occasional' representation.

Worse still, the entire city council is a vapid, useless, grinding patronage mill of organized incompetence and failure---right up to the City Council Speaker herself, Melissa Mark-Viverito (yet another hand picked pal of Bill de Big Assio).

But, can we survive and withstand such impressively awful leadership under this present, corrupt, dishonest, dishonorable, disloyal, derelict, dysfunctional and intensely incompetent administration for another year and a half (and in the case of the Crowley Family Public Dynasty, until her relatives buy her another public service job, as she climbs the civic ladder to the next rung of easy work and easier pay?)?

Alas, in Queens County alone, corruption, graft, greed, dysfunction and dereliction of public duty have just been redefined, for the highest levels of willful failure, that is now below gutter level!

Welcome to the new, official Fourth World everyone: Queens County---the borough of private splendor versus public squalor, beggary and obscurity!

Of course, let's spend money we don't have t o get folks from Astoria to shop in Glendale.running light rail on freight rails would take tons more $$$ for mandatory safety/ dispatching systems and the emloyees to run and maiantain. Didnt a train hit a car( or vice-versa) on Maspeth ave a few days ago?

What, all those "creative" types, those that are producing cheap ass netflix and hulu shows, and that cop show with that cheap ass hair and mustache-dyed water poacher can't take the bus? Afraid to wait an eternity with the middle class they are trying to eradicate?

This is an idea that could have flourished if past legislators and transit officials would have bothered giving a damn about but didn't. But now that the cancerous gentrification has spread to glendale, suddenly there it's possible for improvements.

Richard,while I wholeheartedly agree with your assessment of Crowley, do you have to make every topic on this blog about 'Civic Virtue'?

Never happen because the city doesn't give a shit about these people. To add the lack of transportation is whats kept that neighborhood and its many small homes from being citified. Light rail would be a death sentance

How about Crowley first checking out if this is feasible BEFORE she releases it to the press. Oh I forgot, that's all she's interested in...the press. Like all of Dizzy Lizzy's ideas this will go nowhere. When will her constituents wise up? Why do they keep electing this bimbo?

I guess Crowley doesn't understand what anyone with half a brain knows: The FRA frowns upon 'light rail' or subway trains sharing tracks with heavy freight trains. Matching the proper safety standards would cost billions. Good luck getting the feds to water down their standards, especially on a route with many crossings and a clear history of accidents.

MTA ran passenger trains on these tracks until a few years ago. Light rail here would mean FRA compliant DMUs. LIRR had a line item for DMU spec development last capital plan for some of the east end branches. If freight traffic is low enough to permit decent headway it should be relatively cheap to put a service together Ron this line.

"Remember when she promised to clean up the Fresh Pond Rd /Metropolitan Av vacant newsstand property ???"

Have you been by there recently? It happened. I'm not saying she's responsible but it happened...

No, it didn't happen. She promised to create a sitting area/garden there. Instead, it's a sea of concrete with a bunch of bollards. And the gas station across the street still looks like shit.

Another Elizabeth Crowley fabrication that will not happen, not even a remote possibility. Add the light rail plan to the rest of her big dumb ideas. Her timing for announcing this couldn't have been worse. The train hitting the truck at Rust Street is where she is proposing to place passenger trains. The woman is the dumbest elected official by far, has problems stringing two words together. Love the way she says New York Seedy.

This is a non-starter because of safety concerns:

1. It's crazy to put humans into light-rail cars sharing the right-of-way with heavy freight. So crazy it would be against the law. So what do you do with all the freight that rail system carries? Move it to trucks?

2. It's crazy to put humans into light-rail cars that cross so many Queens roads. And there's no money to covert them into elevated crossings.

San Diego since 1980 runs Light Rail on a freight ROW with freight trains running at night.

Light rail is quiet? Yea when it's electric and the tracks are supporting structures are built to minimize noise. No noisy support structure here, but diesel trains are loud. Give a few years to see what sort of DMUs the LIRR comes up with to retire their existing diesel locomotives. Adding a few cars to the order and would be relatively cheap. But you'd need to get rid of the conductors for the line to be affordable. There's a reason most new light/commuter rail lines use proof of payment like SBS instead of paying conductors to check every single ticket.

Speaking of Elizabeth Crowley- Did her brother Francis Crowley ever get out of jail for rape?

Speaking of Elizabeth Crowley- Did her brother Francis Crowley ever get out of jail for rape?
Yes. He did his time. Let's keep this about Elizabeth, not uninvolved family members.