Petition to clean up Charles Park 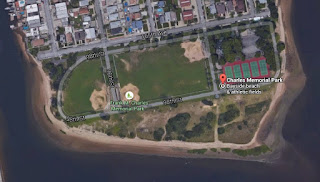 Having Charles Park Beach so close to her house was a major selling point when Debra Ann DiMeglio moved to Howard Beach in January.

But all wasn’t as it seemed. She quickly became disappointed to see how many people were throwing their garbage on the beach and its surrounding park — a longtime problem in the area, according to residents.

“It’s just terrible what’s going on there,” DiMeglio said. “It doesn’t give a good face to the community.”

Now, she and her sister are on a mission to get the National Parks Service to improve the maintenance of the federal parkland — and their cries are backed by close to 250 people who so far have signed onto a petition in want of a cleaner park.

“The whole park needs to be cleaned up. This should not be,” DiMeglio said.

In an online petition at Change.org, DiMeglio and her sister Sheri say Charles Park, located at 9600 165 Ave., “was once a beautiful park, where residents would enjoy their visits and the beautiful view.”

They couldn’t say the same for today.

“The beaches are horrendous,” DiMeglio said. “When I walk around I’m seeing all the debris and dirt and people barbecuing. There’s barbecue charcoal everywhere.”

She’s not alone in that assessment.

“The park looks like a junkyard,” Steven Sirgiovanni said. “I wouldn’t want to have a kid or a dog going in there.”
Posted by Queens Crapper at 6:08 AM

This has been going on for years. Even with all of the photo ops taken by local politicians over the years....the problem has never been resolved .

I recall that park being nice in the 70's and 80's. I used to play baseball there and the field was plush green and now it looks like a dust storm hit it. I don't know what the demographics are in howard now, but lazy slobs are lazy slobs no matter what race or religion. There should be big disposal cans for the coals but people use them for regular garbage and it's probably why they dump it on the grass, therefore ruining it.

Good luck with the petition,it sucks that's what needs to bring attention to blight and the parks dept. should be maintaining it anyway. You wouldn't see this crap in Central Park or even McCarren Park.

I remember my dad going out EVERY DAY, sweeping the front steps, sweeping the sidewalk, picking up the sweepings and putting them in the trash can. He did this every day until his death in 2003.

So did most of our neighbors on the block. People took PRIDE in their neighborhood! I am 67 and still do it, but the make-up of Jackson Heights has changed, and ONLY a few of us do it now. There is a lot of trash that is NOT mine, but blows into my small garden: flyers, pamphlets, brochures, menus from Chinese restaurants, coffee cups etc.

Sometimes I look out, and think: "It's just not worth it any more."

But then I grab the broom, and get to it. I just can't stand looking at rubbish....

But I guess, in a public park, where people come and go, there is even a greater absence of "neighborhood pride". I feel for these folks who live there.

Our city in general has become a filthy, rubbish filled DISGRACE!

Charles Park? Is he Korean? Why can't he clean himself up?

People don't need to clean up after themselves! We can pay the government to do it for them!

The main culprits that bring and leave all the trash:
1.The kids who hang out at night and party leave their beer bottles.
2.The Hindu worshipers put fruit, vegetables and flowers in the water along with reams of cloth , statues and candles.
3.People who fish there leave beer bottles, bait, dead fish and fishing line with hooks.
4.The tides bring in all the trash that falls into the water from boaters or comes out in the sewage system.
A few years ago they had a National Park worker that would rake the beach each day but he only lasted one summer, probably budget cuts.
It's evident that the National Parks Dept. can't do a good job maintaining Charles Park as well as all the other parkland they have but a couple years ago New York Parks Dept. was supposed to work with them to help but I haven't seen any improvement.

With all of the ticket writing/revenue raising campaigns why doesnt the City start a crack down on littering, both in parks and on the streets. The city is really becoming a festering shit hole and all everyone talks about is having the city spend more money to clean this crap up. Why not attack the slobs that are making the mess?

Another petition to be taken lightly.

I wonder if some funds that Parks gave to the Brooklyn night bazaar to upscale and gentrify riis park may have gone to put sod on the baseball fields and maybe hire a couple of people to clean up the area.

Anyone seen what the area around the broad channel bridge looks like? Exactly like Charles with the bottles, and discarded exotic fruits and coconuts. Plus tiki torches.
Huge racoon population too. Go there at night and you can the light in hundreds of their beady eyes.

Just another part of the HB mission to keep anyone who doesn't look like them out.