Grimm gets only 8 months in prison 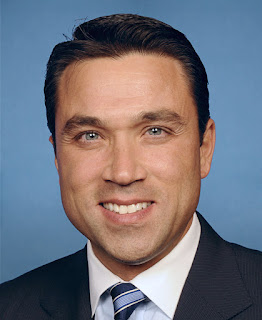 Grimm resigned from his seat shortly after winning reelection in 2014. Dan Donovan, the district attorney in charge of the Eric Garner investigation, now represents the district.

Grimm's lawyers had hoped to avoid a stint in prison; they argued that the Staten Island politician was "tremendously remorseful over his offense" and "will live with the shame of it the rest of his life.” A federal investigation into Grimm's campaign fund-raising ended with charges accusing Grimm of paying employees at his Manhattan restaurant Healthalicious off the books — and thus avoiding taxes.
Posted by Queens Crapper at 8:04 AM

Once again, political greed is rewarded with leniance, instead of by example, versus a crooked housing inspector, who was recently sentenced to up to 7.5 years in prison!

Where is the justice here, and why do the most unconscionable acts of corruption, greed and graft receive marginal and minimum punishment?

Alas, Americans have lost all rights to a voice that demands freedom and democracy---where the crooked courts and justice system themselves practice lawlessness and disregard with impunity!

Welcome to the United States of Fourth Worldism, everyone!

Hope he gets buggered good! That will make up for too short a stay.

How does sharptin get away with not paying taxes?

The pretty boy will be very popular in prison.

Richard,sll politicians are crooked and that's why they get short sentence's, every politician knows they could be next so the fix is in,doesn't even matter witch party.
Think Sheldon silver will ever serve a day? Not happening brother.

I sadly agree, Anonymous. I've now resigned myself to firmly belief that all legality is a construct of the powerful, and not of any and all purportedly blind justice system, which is not blind at all---only selective, occasional and exclusionary!

But, with each case of leniency that gives license and permission for corrupt, dishonest, and crooked politicians to pass the smell test, the rest of a purported law abiding society is taking notice of the colossal travesty of justice, that leads to cynicism and vigilantism, when all justice (and the system that determines crime and punishment), miserably fails its citizens, with a vengeful disregard for consequences that are justified, but never properly and fairly executed.

For every Michael Grimm that doesn't get what he rightfully deserves, there is an imprisoned citizen (of average rank-and-file), who gets the book thrown at him for far less! Right now, there is a profound imbalance of power and privilege that affects all levels of our judicial branch of government---right up to the Supreme Court itself, who recently ruled that 'Money is free speech!'

The rich, powerful and politically connected (who clearly have been proven guilty), are no longer required to pay the price of their flagrant abuses of trust and lawlessness, versus the innocent (and partly innocent), who are convicted to longer jail terms for crimes that are far less egregious!

In fact, we are seeing the continued results of such a corrupt justice system that leaves its subjects to their own forms of street justice (that I correctly predicted above), right now, and throughout New York City and New York State---that is now operating as a full police state, much like California operated, under siege, during the 1950s.

Brace yourselves, then, for pandemonium to get a lot worse before any pretense of getting better, when politicians continue to exalt themselves from the inclusionary doctrines of law and order themselves!

Everything is getting uglier here, because the ugliness and abuses themselves are once again (and still), a product of all highest levels of abused, public service power, privilege, intolerant extremism and unjust enrichment. Will it ever end without revolution, then?

"charges accusing Grimm of paying employees at his Manhattan restaurant Healthalicious off the books — and thus avoiding taxes." Otherwise known as, what every single non-chain franchised restaurant in the United States does every day. Granted, he's a former FBI agent and elected official so he should have known better but it seems odd that he got raked over the coals for something every restaurant in the city does. Show me a restaurant kitchen in Manhattan and I'll point out the various cooks and dishwashers who are being paid cash off the books. Guess he pissed someone off.