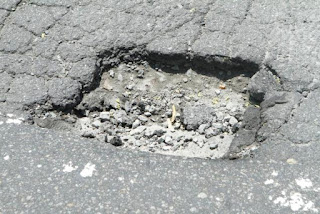 A bicyclist was injured when he hit a pothole and impaled his neck on a nearby fence in Queens on Sunday, authorities said.

The cyclist, a man who appeared to be in his 40s, was rolling along near Stockholm St. and Woodward Ave. in Ridgewood when he hit the hole and crashed about 11:42 a.m., officials said.

The man fell off his bike and hit his head on the ground, stood up, stumbled, and then fell onto a metal fence, impaling his neck, police sources said.

"He hit his head really hard," said one witness who declined to give his name. "Then, in a daze, he starts stumbling onto this fence. He falls onto the fence and skewers his neck. (It went) all the way through his neck. It was the most gruesome, weird thing I have ever seen."

Emergency responders cut off a portion of the waist-high fence in order to treat the man. He was taken to Wyckoff Heights Medical Center in stable condition, sources said.

Build bike lanes.
Encourage people to use them.
Fail to maintain them.
Repeat.
Posted by Queens Crapper at 6:14 AM

The city doesn't even know how to fill a pothole, plant a tree, or clean a street. Our tax dollars get inferior city services and our leaders just sit back and do nothing except collect their paycheck.

How does a bike lane get a pothole?

I don't know how, but I do know that I seen hundreds of them in the past 5 years since these lanes got painted. That one that rider got impaled on must have been huge. The majority of potholes I seen were small but are hazardous enough to produce flats and damage wheels.

That whole lane along the cemetery has a giant ripped up stretch of poorly repaired (looks like) utility work basically running down the center of the bike lane. It's riddled with cracks, bumps and substantial holes. It's visibly more cracked and damaged than the rest of the already not great street. Basically, it's in terrible shape. Probably doesn't help that stretch of Woodward is entering into the IBZ, where the roads look legitimately third world.

With that said, I'm not sure if this is really a biking specific problem. Driving and riding my bike, I haven't noticed more potholes in bike lanes than in roadways. New York roads in general these days seem to be in rough shape and he could have hit that hole with or without the lane.

Lastly, before everyone starts ranting and raving about bike lanes this, how dangerous it is-- correct me if I'm wrong, but aren't rates of injury and deaths down substantially with the increased ridership/increased infrastructure? Meanwhile, is traffic demonstrably worse over the last decade?

Such is a normal day in New York Seedy. Take a good look at our filthy streets lately? Love to hear the spin Mayor deBlahsio puts on it.

The bike lane on the Cross Island parkway in Bayside named after Joe Michaels is in terrible shape. It's filled with potholes and all the painted lines are faded putting pedestrians, Rollerbladers, walkers, joggers and bikers in danger. Everyone likes a ribbon cutting ceremony but maintenance is often overlooked and under funded.
But hey we have a new parking lot to bring in more people and a bathroom that is taking years to be completed.

These Bloomberg fantasy bike lanes and bike traffic were a bad idea from the get go.

Maybe the luky biker who just hit this hole could now say , "I'm head over heals in love with biking on busy jurban streets".
Lilliputia does exist in the smaller minds of laceration New Yorkers. If you're thinking of bucolic biking, try the Adirondacks.

Even a good idea poorly maintained becomes a bad one.
The city is known for poor maintenance. WTF...the maintenance unions can milk us taxpayers for overtime pay.

Ummmm - why didn't the rider notice this? I ride. You must keep your eyes open and your mind active: parallel sewer grates eat racing tires; bike lanes are next to curbs, where storm sewer lines frequently cave in. Glass and other debris. I know, I'm blaming the victim, still, bike riding, like anything else, is not inherently safe.

Obviously, regardless of how attentive or in-attentive the rider was, this is a tragedy....

Of course, now the city, instead of spending a SMALL sum to fix the pothole(s), will be slapped with a lawsuit, and probably have to pay out millions of OUR tax dollars to settle the case.

And the homeowner, whose fence was cut, has to pay to have the fence fixed/replaced, and he/she may sue the city as well.

This is a trip and fall lawsuit-- thousands daily in this city by those looking to cash in-- and they do. Yours and mine tax money.

J, are you serious ? "Is traffic demonstrably worse in the last decade?"!!!!! Where do you live that you don't see the horrendous increase in traffic? Do you think people are trading in their cars for bikes? Tear downs of 1 family houses replaced with 4...and you don't think they have cars?

Woodward Avenue was crappy and never maintained prior to the bike lane. I'm surprised this hadn't happened sooner.

I emailed the city pothole repair department to report a very dangerous sinkhole and severe "waving" of the pavement around it on Jewel Avenue. They eventually got a crew out there---somebody's brother-in-law, I guess. Because the very next day, the sinkhole was collapsed again and the wave in the pavement barely abated. This was obviously 100% shoddy crap workmanship. And yet I'm sure they got paid top dollar. Their work is equivalent to those fraudsters who come around to "repair your driveway" by pouring oil on the cracks. The rest of Jewel Avenue is filled with many potholes, a ridge across the road that causes the cars of the unwary to rocket into the air, etc. And when they repaved Jewel Avenue through Flushing Park, they didn't paint lane stripes for nearly a month, causing a very big traffic tie-up every morning, as no one knew where the lanes were, and a very dangerous situation driving there at night.

The whole street repair department needs to be reamed from top to bottom, to get rid of the stinking corruption there. They are no better than those traveling driveway repair guys.

About two week ago I saw two bikes using the same bike lane on Utopia Parkway crash into each other. Neither of them had the sense to get out of the others way.

The city needs cash? License the bike riders and give them summons for breaking traffic laws.

If the city can't even maintain a planted tree, do you really think it can maintain a bikelane? 25% of all of the trees that the city plants don't make it past one year.

> 25% of all of the trees that the city plants don't make it past one year.

Is that higher or lower than average?

Street trees the city pays for get planted with a two year guarantee from the vendor. It's probably cheaper to skimp on care shortly after planting, if a local takes care of it and the tree lives great! If not, find a better place where the tree is more likely to thrive for the replacement.

25% is higher than average . Urban centers tend to have such high failure rates. But 25% of neatly 1million trees that the city has almost finished planting is quite substantial. Most trees are planted by third-party vendors that have very little supervision by the city. It costs $600 to plant a tree in NYC. Do the math.

Can we start calling mayor droopy eyes by his real name which is Warren Wilhelm or is Wilheim ? I really can't believe we have a city of around 8 million people and the news media here barely mentioned the fact that this weirdo changed his name and became mayor.

If it wasn't reported before the accident is the city libel?
Let's face it NYC roads get a beating and are always getting dug up and that goes for bike lanes too.Drivers should always be cautious of bikes because all the debris
such as rocks,glass and wood wind up on the side of roads from cars. A pothole or a sunken sewer that wouldn't be a problem for a car could be disastrous for a bicyclist.
I'm a motorist and motorcyclist that has been driving NYC streets for almost 50 years and have been a bicyclist even longer than that and I don't mean just a Sunday in the park cyclist. I've peddled all the boros and seen all kinds of traffic situations and I have only been in a few minor accidents with my car and none with my bike.
We all do stupid things from time to time but overall I think NY drivers are pretty good. I've met many out of towners and former residents who are afraid to drive in the city.
I agree with all those who have gripes with cyclists, they are their own worst enemy. Some of the things I have seen bicyclists do makes me so mad and I've done some of them myself but whether we are driving a car or riding a bike we must be careful, courteous operate in a safe manor so you don't hurt yourself or others.

Haven't rode a bike in 30 years,I like driving my big SUV.
I'm old and safe.

Who needs bikers , bikes, and bike lanes?
They have become just another dangerous nuissance in New York City.
We will not even discuss the behavior of hyped up bike messengers.
My tax revenue should be put to better use.
This is not a European city where people have better manners when they're biking.

"Bikes belong in parks not city streets"
Spoken like a true car snob who dislikes people and their activities.

"If the (pothole) wasn't reported before the accident is the City libel?

From past experience I can say NO. You must give the City time to correct the problem. So, this poor guy is going to be a lot poorer from EMS ambulance charges, emergency room charges and (possibly) loss of employment. Only taxpayers lose. Not the City.