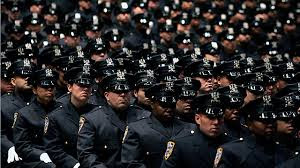 The mayor and the City Council are close to announcing a budget deal that will include funding for more cops, sources told the Daily News.

The final number will likely be smaller than the 1,000 that the council — over the objections of Mayor de Blasio — had been pushing for, said one source.

"It's not going to be the thousand, but we believe it's going to be a good number," the source said.

The issue of increasing headcount in the department, which the council believes is needed to combat a rise in shootings, was one of the major sticking points in tense budget talks, said the source.

Although the mayor had repeatedly said he was happy with the NYPD headcount as it is, the council wouldn’t budge on the issue in budget talks, said sources.

Bratton agreed to cost-cutting measures the mayor had been calling for - like reducing overtime - in order to pay for more staff, the source said.
Posted by Queens Crapper at 12:10 AM

Wasn't crime still decreasing when police went on an official strike after the two cops were killed in Brooklyn ?

I love how they keep talking about this as if it is a win for public safety - it isn't. We already know 1000 new cops is a band-aid to cover the attrition rate and more than half a billion being spent on overtime. It won't lead to significant new patrols.

It's just too bad journalism doesn't exist anymore. The press outlets just parrot everything city hall says without looking at it twice.

How does this relate to Queens? Think Police Academy in College Point. As if the Flushing line and Main Street aren't crowded enough. Who cares? It's a dumping ground already. Just putting my 2 cents in.

Dear Anonymous, you are expecting far too much from today's propaganda, 'neon yellow' journalists, for them to properly report all news and investigations honestly and ethically, while challenging all authority, and then fact checking for total accuracy, before their impossibly rapid, speedy deadlines of publication (hence, grave, unforgivable inaccuracy).

Alas, I've long ago lost all illusion and pretense of accountability and transparency in journalism---where the truth is now (as always) a closely held commodity. But, given how intensely corrupt, entrenched and out of control that City Hall and Albany have now become (and getting worse by the hour), I would think that modern day reporting and journalism would answer to a higher threshold for highest standards to prevail.

Sadly, many if not all of what passes for hard hitting journalism is marginal at best, and sloppy and shabby at its worst.

In fact, after lunch and a manicure, many purported journalists are simply ready to pack up for the day---until they all jockey for yet another corporate ordered, serial loop installment of Kim Kardashian's monstrous hind quarters, that can be seen from outer space!

Welcome to 21st century journalism, folks---and enjoy the distracted illusion of power while it lasts!

For a whole 10 or 14 days? Not exactly a reliable data point.

Not enough to make a dent. With all the recent anti cop sentiment,there is little cops can do with no backing from th PC an Mayor. Ever since the president said that police hace to stop targeting minority youth, policing in the US has chaged for the worse. This will be seen as summer is here.........

There will have to be an ever increasing number of cops as their job has been reduced to a glorified security guard. The powers that be not longer back them. The City Counsel has now opened them up to private law suits if someone does not like their actions. Any NYC cop is nuts if he does not stand around and wait for specific instructions on how to act. Until the cops are allowed to police all they are is an illusion of security.

Be armed,or be harmed. You're on your own.