Mayor's budget is no good, but the council will pass it anyway 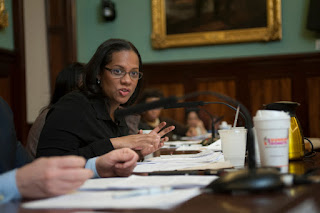 Despite promises that the “budget dance” is over, City Council members today said that the mayor’s proposed city budget would mean waiting lists for seniors services and library program cuts—while other agencies like the NYPD rack up big overtime bills.

“Let me be clear, the days of the budget dance are over, and as Finance Chair I reject any notion of the budget dance,” Councilwoman Julissa Ferreras said today, insisting this year’s fight was different from previous tangles over closing firehouses and libraries. “However, the administration has failed to reflect in the executive budget funding for many of the Council’s priorities, such as senior services and youth programs.”

Excuse me, but why is "the budget dance over" if there are objectionable things in the mayor's budget? Why do we have such a lazy and spineless city council?
Posted by Queens Crapper at 12:13 AM

Politicians fighting over our money

Senior services and youth programs my ASS,your looking for money to Skim,kick back and steal anyway you can
I have never seen corruption of this magnitude and its just overlooked,
America's best days are behind us,every citizen should just throw thiernhat in the ring and loot like your elected official.