Huge development in the works for downtown Jamaica 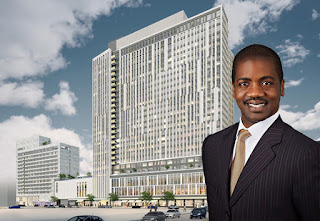 BRP Companies paid $19.5 million to purchase a Downtown Jamaica development site where it plans to build a pair of mixed-use towers with 580 rental apartments. The Midtown-based developer, which specializes in affordable housing, bought the site at the corner of Sutphin Boulevard and Archer Avenue from the nonprofit Greater Jamaica Development Corporation, which spent years assembling the site. BRP plans to break ground in December on the $300 million, 737,000-square-foot project dubbed the Crossing at Jamaica Station, which will include 580 mixed-income apartments and 100,000 square feet of retail across three floors. FXFOWLE is serving as the architect.
Posted by Queens Crapper at 12:19 AM

What a great location. It's not overly-congested there at all. Even though the site abuts the LIRR tracks, I'm sure that the building's construction will not cause any problems at all to trains coming in from Long Island.

This site will be an empty lot for years collecting public "grants" and "aid" for "studies" to "develop" it. The other "prime development" at 94th avenue and sutphin been empty for years with development always promised next year. Jamaica's real estate model is, buy it with taxpayer money, blight it, tear it down, make the next developer buy it with taxpayer money, rinse repeat. Dont forget this site is line of sight from infamous "stabbed in the back" man http://www.nydailynews.com/new-york/nyc-crime/man-hospitalized-stabbing-mcdonald-queens-article-1.1841685

That entire area is a disgusting dump! Who in their right mind would want to live there? Ever walk around downtown during the summer ? This will be just another black hole event for Jamaica. Money wasted and no plan to address the REAL problems in Jamaica...for the last 40 years!

Make that wall of development high to keep the people of color away from the good part of town.

another black hole event for Jamaica

And speaking of the hookers...

This looks nice. Jamaica seems ready to take off. I'm hoping that development will eventually bring us more amenities to the neighborhood as the demand increases.

Wonder if they are Chinese buyers?

For all the negative comments, exactly what should be done, just leave Jamaica in the state it is and do nothing at all. I see this all the time, someone or some group does something to clean up an area and a negative comment is made or someone states, "leave" or someone says, "that is just the way it is" or that "it's futile" or "deal with it". Such defeatist attitudes.

And by the way, the racist comments are unnecessary. I know we have freedom of speech, which I am all for, but I don't see what those comments have to do with the topic at hand. So are you trying to say that all black people are bad, while white people are fine and dandy. I just don't get the apparent racists comments.

My grandmother used to live in Jamaica. It was a nice place back then, in the early 20th century. Good transit options, a lot of commerce... How did it turn to such crap while Queens neighborhoods even further away are nicer? Joe's right - Jamaica is one area of Queens that should be hit good and hard with gentrification. The decline has got to be reversed from the outside in; clearly there are not enough concerned citizens there to do it themselves.

Joe - it's well known that the overdevelopers pay people to post racist comments on this site in an effort to discredit the legitimate critiques of real residents who care about quality of life, not just profit and yuppies. Crappy posts the comments because he's an overdeveloper false flag operation.

Yes, I'm an overdeveloper false flag operation. Good God you folks need to get real. Check ANY site on the internet that allows comments and you will see racist, sexist, stupid comments. Gothamist, Daily News, Times Ledger, etc. Why is this blog held to a high standard by its readers? Why bother to read the comments at all if they bother you?

A lot of it went to line the coffers of Greater Jamaica Development Corporation.

Everyone likes to attribute anything racist to shills, but in reality it's just trolls.