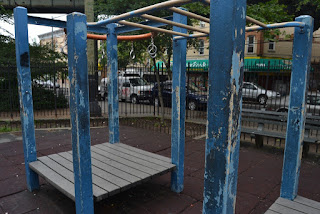 Things aren’t so rosy at Rosemary’s Playground in Ridgewood, according to mothers Stephanie Sauer and Caroline Stark, who frequent the park with their children on a daily basis.

“This is the closest park for residents of this neighborhood,” Sauer said. “There are a lot of parents with young children that visit the park, as well as people of all ages and races.”

These two moms are looking for improvements to be made at Rosemary’s Playground so their playground can be comparable to other parks around the area. They addressed the issues directly to Community Board 5 during its meeting last week.

“I am wondering why this one is so neglected,” Sauer said in an interview Monday. “If you go to the park by Grover Cleveland or Juniper Valley Park and see how great those parks are, it makes me wonder why this playground is so ignored.”

Some of the problems Sauer and Stark have noticed at the park include peeling paint along some of the walls and playground equipment, potentially dangerous elevated flower beds, and trash in and around the playground, among several others.

The Queens Courier has a great slideshow that reveals just what a dump this park is. Juniper Park has an army of volunteers that take care of the park. That's not happening in Ridgewood.
Posted by Queens Crapper at 12:25 AM

That's the only words I can come up with....

This is sad, the park is named for Rosemary Gunning, a woman who spent her lifetime working to make Ridgewood a better place. For the sake of her legacy and for the sake of the kids Liz Crowley should locate some funds to spruce it up. The park is not that large and it should not cost all that much.