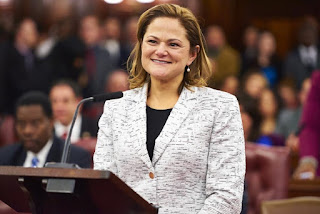 The City Council doled out more than $50 million in taxpayer cash to favored nonprofits in a list of “member items” released Thursday.

The $52.6 million in discretionary cash — which Mayor de Blasio vowed to abolish, but quickly gave up and let the Council keep giving out — is part of the $78.5 billion budget set to be voted on Friday.

The biggest winner was the Hispanic Federation, which brought in $666,000 in grants, mostly from Speaker Melissa Mark-Viverito, as well as Councilman Ydanis Rodriguez (D-Manhattan). Next up was Catholic Charities, which took home $550,500.

Also in the top 10 was the sprawling nonprofit founded by disgraced ex-Assemblyman Vito Lopez, the Ridgewood Bushwick Senior Citizens Council. It got $324,400.
Posted by Queens Crapper at 1:34 AM

Talk about favoritism! COuld the Feds please investigate this bitch?

Sounds certain races are being given our tax money. Oh well I should blame myself for not having 10 kids on welfare and sending them out to vote.

They give tax -payers $$ to senior centers and other non-profits, get the credit for the donations, get to pose for photo ops with the seniors, thus insuring that the seniors vote for them in the next election.

Sorry #2, they may have only highlighted certain ethnic non-profits, in this article, but trust me, this is an equal opportunity enterprise. Just about anyone with a pulse can declare themselves a non-profit serving NYC, fill out the forms and get some money. You should try it instead of spewing about racism. (Not that I condone this program in any way, because it's generally a waste of taxpayer $ regardless of the ethnicity of the people getting the funds).

one wonders how much tax $$$$ is maintaining and installing the celebration of F.A.L.N. terrorists of the 1970's-80's, being that 40 members voted to ask Obama to pardon the Puerto-rican nationalist ,(bombmaker) Lopez, who would not take the pardon in 1994 from Bill & Hillary Clinton. the bombmakers ,according to B.Burroughs, "DAY OF RAGE",they blew Willie Morales nine fingers off in a rooming house in East Elmhurst. across from La Guardia Airport. A bomb killed 11 and injured 75 at the TWA luggage area from a locker. records show that no group or person was charged or convicted , since 12/27/`1975. could this group have done the dirty cowardly deed?

and the 40 members of the City Council want him Pardoned ?????recall,recall, impeach,impeach.

just finished reading Ann Coulter's new book "ADIOS AMERICA", with 90 pages of footnotes . could D.Trump have also referred to it ? $20billion being transferred to Mexican relatives each year ,while the illegals collect U.S.taxpayers entitlements galore. over 2500 Central American unaccompanied children 18-2 --plus ,enrolled in nyc schools and more coming. 700 are in Queens schools as ,"REFUGEES"with legal council paid by mostly taxpayers.

Educ. official : "PAY YOUR PROPERTY TAX AND SHUT UP"

THEY SHOULD BE EXECUTED .

BUT ARE CITIZENS BEING DRIVEN TO IRRATIONAL ACTS BY GOV. FORCING THEIR WILL ON THE PUBLIC ?

REMEMBER THE Koch "BORDER BABIES ' INVASION OF THE FRESH MEADOWS /AUBURNDALE ZONING LAWS IN THE 1980'S.