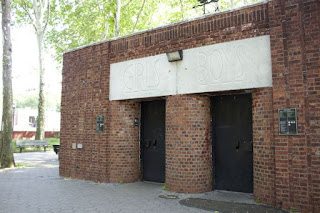 The restrooms at Charybdis Playground in Astoria Park are in need of a serious makeover, according to parents and a local parks group, who say the lavatories are too small for the crowded play space, and often dirty.

The bathrooms are currently closed for the season due to plumbing issues, and Port-A-Potties have been placed there in the interim, according to the Parks Department.

The Astoria Park Alliance recently held a "visioning session" asking parents and kids what they'd like to see changed at the popular play space. The bathrooms came out at the top of the list, the group said.
Posted by Queens Crapper at 12:40 AM

Weren't these fixed just a few years ago?

Who needs a bathroom used every day when you can blow a few million and build a theater next to the pool... *facepalm*

What ? No showers for the pervs and homeless,.

Hope it gets done faster than the Fort Totten bathrooms !

So the bathrooms have been closed for the summer season and porta potties have been installed, that's just great. You know, any private property owner can get several bathrooms remodeled in 3 weeks time. Only government employees would decide it can't be done for the entire summer and then expect the tax payer to use those stinking shit hole porta potties. This is just another example of why we should not trust government to do anything. All services except for police and maybe fire should be privatized. If not we are doomed.

that was Parks Comm. Stern - there are tons of names they could have given it but the landscape of NYC is the plaything of dotty hacks.

How about the millions being wasted with the Valloone Entertainment Center that Costa is building with your millions in 5 million (and counting) in taxes for his patrones next to the swimming pool:

no roof, no bathrooms, no stage, no food, no sense.

Well i guess the schools, and trains, and sewers, and utilities and libraries and [fill in the blank] can just wait while our amazing politicians stumble around the landscape watching the feds pick them off one by one.

and you, dear people, just let it happen. how they piss away your taxes just a spectator sport, eh? tell it to your kids.

Astoria Park is trapped between the 2 sewage plants, Bowery Bay and Berrian Island that chased everyone out of the park one July 4, 2010

Who is going to tip off the developers in Astoria Cove?

**the schools, and trains, and sewers, and utilities and libraries**

No more hope for the schools and libraries, they are nothing more then babysitting services or community computer centers for illegals. Up grading utility's only paves the way or bigger building so just clean out the silt clogged sewers and leave the rest alone.
NO MORE "UPGRADES" CHOSEN BY DEMOCRATS PLEASE !!

>too small
>and they don't work

I'd rather risk a fine and take a dump behind a tree than dare to enter a public park or playground toilet.