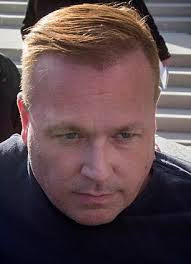 Disgraced former City Councilmember Dan Halloran surrendered to federal prison officials on June 8, approximately one week after a Federal Appeals Court nixed his bid to remain free on bail while he appeals his bribery conviction.

Halloran, who was supposed to surrender to authorities on June 1, was granted an extra week of freedom before starting his 10-year prison sentence for masterminding a scheme to help former State Sen. Malcom Smith buy his way onto the 2013 New York City mayoral ballot.

In a May 29 letter to Federal Judge Kenneth Karas, Halloran’s attorney, Jonathan Edelstein, requested a one week extension of his client’s surrender date, until June 8, saying Halloran needed “a short time to put his affairs in order,” including time to pack his personal effects, surrender his license plates, file paperwork with the state Bar Association, book a flight to Kentucky and get his dog settled in a new home,” court papers state.

Halloran turned himself in to a federal prison in Kentucky on June 8, where the Federal Bureau of Prisons had already assigned Halloran his register number, 68384-054, which will also serve as his prisoner identification number.

But before he turned himself in, he sent the following 8-page rant to his close friends:

Blacks would have elected Malcolm Smith,what a shame,instead we got DiBlasio
The judge should Tak on another 10 years for cheating the good people out of an Honest crook (Malcolm) as mayor
Don't bend over for the soap Dan or you might get a taste of what it feels like to be a tax payer.

He, or rather his lawyers, are trying to intellectualize a crime and obfuscate a simple fact: He solicited and received a bribe. In so doing he violated both the law and his constituents.

And they don't have hair dye in prison.

Can someone summarize the lenghty document in just two lines?

Here we have proof of the old adage:

Bottomline, he is a disgrace to his family, friends and constituents.

The last time I saw something like Dan's manifesto was what Jack Torrance was writing all winter on his typewriter in The Shining.

Halloran will be gone for awhile.
Now, let's move on to the next Queens politician who will reside at our expense in a state prison.

When it comes to hyper-corrupt Queens County politicians, there are no surprises anymore (if ever)!

Unfortunately, the ones who are most corrupt, have the 'juice,' power and 'inner circle' connections to get things done---honest or otherwise (mainly 'otherwise'). Hence, the very corrupt, dishonest, derelict and disloyal in politics are foisted upon real, help-seeking constituents who are often left to their own devices, as they languish in eternal obscurity---again, still and forevermore.

Political corruption is a way of life in Queens County (and everywhere else), and it's never ending!

Kevin James will play him in the movie of his life!

Looks like Danny Boy is going to take an unintended detour to the hoosegow before he sets off on his journey to Valhalla to hang out with Odin!!!!


He only did what all politicians do, but at least he didn't sell his constituents out doing it.
This is what happens when you don't obey the machine. He didn't play by their rules.


When you get thrown into Federal lock up, you are required to serve 85% of the sentence. In his case, Dan will be doing at least 8.5 years, and that's with good behavior.

When you get thrown into Federal lock up, you are required to serve 85% of the sentence. In his case, Dan will be doing at least 8.5 years, and that's with good behavior.

Good to know, but there's always some b-s compassionate release nonsense. Or a pardon from President Obama.

Danny will pick up clients in the pen. He'll write their appeals and give advice.

Wonder what career he will rehabilitated for?

Truly a as dillusional mental case. Man....what a manifesto!
This will be used as evidence in a mental case appeal. Maybe this ain't as dumb as it looks.

Better lay in a good supply of cigarettes to bribe inmates with and a king size tube of KY if Bubba should take a liking to you, Danny boy.

Where is the grand atheling of his tribe's Theod deities now to help him?

And I thought that Mein Kampf was a ponderous.piece of work.

Hate to burst anyone's bubble. He's at Ashland Kentucky. It's pretty much a summer camp there are four tennis courts, four basketball courts, a huge baseball field. if he doesn't screw up he's in for "Easy Time"

Oh, you've served some time at Ashland Kentucky, fella?
Wadda you know? The man will not be able to practice law except maybe on Mars.
That's a good start for Danny. The only thing good he's god at, by personal observance, is bending the elbow.

At least he will be out of politics....summer camp or not.
That is what counts!

Didn't sell out his constituents?

$100,000 earmarked for autistic children was taken away and given for a no show job

He tried pushing the White House into a catering hall

He had deals with Marino

And so on and so forth

He was stopped!
Thank God!

Anon no. 30: Why are you changing the subject?

Halloran is a schmuck and deserves prison time for his betrayal of his voters.

saying that, did you know that the Special E ducation Autistic programs seat 7 pupils per room (normally could seat 20-30 ), with two U.F.T."teachers". the cost to the nyc property tax payer was $65,000 per pupil/year in 2007, according to DOE website. and could be $90,000 in 2015. the DOE website no longer will give this number any more. one wonders WHY ?

Anon no. 33: Why are you changing the subject again? And Halloran wasn't just a "schmuck." He was a bad guy who got caught in the act and is going away for his deeds.