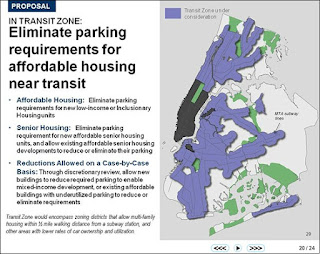 Speaking on the city’s “Zoning for Quality and Affordability” plan — which seeks to increase building height and density in certain neighborhoods in an effort to add affordable and senior housing — Eric Wilson, assistant commissioner of inclusionary housing for the city’s Department of Housing Preservation and Development, said Flushing, Long Island City, the Rockaways and “a little bit in Astoria” would be the Queens neighborhoods most affected by the plan.

“The idea is to not change the context of one- and two-family houses,” Wilson said, referring to the makeup of Woodhaven.

He said the plan is necessary because the city’s population is increasing every year and there is little housing for everyone.

“Demand is outpacing supply,” he noted.

The fact that Woodhaven would not be touched did little to calm the audience’s nerves. They pointed out that East New York, a Brooklyn neighborhood that is proposed for its own individual rezoning, is near Woodhaven, and changes there would put pressure on the broader infrastructure.

The zoning affects THE ENTIRE CITY. It doesn't exempt certain neighborhoods. This guy lied publicly and should be publicly ridiculed next time he pulls this nonsense out of his ass. Just take a look at City Planning's map of the "transit zone" which most definitely includes Woodhaven since it has a subway running through it.

Meanwhile, groups like HANAC that get government money for promoting overdevelopment think this is fantastic.
Posted by Queens Crapper at 12:04 AM

You can't fit 5 quarts into a gallon container. The roads and public transportation can barely operate now. There is no room ,go away,we don't need you here. What ever happened to quality of life? Within 10 years they'll start building over cemeteries, stating a need for more housing.........

The city wants to turn Jamaica Avenue into a pedestrian and bike passage? Where will all of the cars and trucks go?

need to take away free parking from municipal employees so they take the subway. last time i had jury duty i took the train to jamaica