Banks everywhere but no small businesses 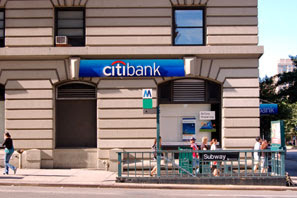 Banks, drugstores, and other large chains are replacing small shops and restaurants, even financially successful ones. Small businesses can’t afford the rents that tenants like TD Bank and CVS can pay. With industry data showing that the average asking retail rent in Manhattan jumped 22 percent in the past decade (after inflation), landlords in prime spots are happy to kick healthy businesses out months or even years before finding a new tenant. It’s worth the wait, they figure. The same logic applies to new spaces, which often stand empty.

Banks have proliferated the fastest. FDIC data show that between 2000 and 2013, the number of bank branches in New York State grew from 3,416 to 4,415—and New York City, with nearly two-thirds of the state’s banks, was responsible for that 29 percent growth. Eighth Avenue between 50th and 59th Streets boasts branches of Bank of America, TD Bank, Chase, and Citibank, three of which opened in the last decade. The banks overwhelm their blocks and leave them with not much going on at night.

Every community needs banks, of course, but market demand isn’t driving this expansion. (When was the last time you stepped inside a bank?) Rather, seven years’ worth of zero-percent interest rates from Washington have kept banks doing well—as did the previous two decades of low interest rates, encouraging American consumers to keep borrowing. Other global chains have taken advantage of these friendly interest rates to rent up Manhattan space as well. There are also other factors at work in the retail rent spike, including the surge in global tourism. But for small businesses, the reality is plain: Manhattan is becoming unaffordable.

I don't know why banks are opening more brick and mortar branches when the trend these days is increasingly toward online banking. And in Queens, it seems that banks are closing more than opening lately.
Posted by Queens Crapper at 12:27 AM

I know by where I work on the upper east side, a cvs took over a clothing store....mind you there is a Walgreens literally right across the street from this cvs! When I saw that I was like wtf?

Bear in mind those leases are an investment, so the chains are playing the same game the Landlors are playing, if they're taking long term leases. I remember when good old Woolworths went down: one of their most significant asset was their collection of 100-yr leases.

And the Mega banks rarely participate in or sponsor local community events. But the small local banks do. Go figure.

No place has banks like AStoria, many small oddball ones.

Heard certain local pols have an interest in them.

This proves the enormous amounts of profit banks are making in order to pay these overinflated rents by giving us .75% interest on our money instead of 6% - 8% they used to.

Don't support these criminal banks. Find a credit union to put your money in.