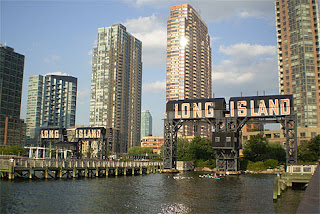 Despite a flurry of new construction in Long Island City that will most likely shift housing in the Queens neighborhood from rental to luxury condominiums, the de Blasio administration is pushing for greater density and more affordable units there, a planning official said at a Tuesday panel discussion

“Everybody understands the opportunity to put density where you have transit," said John Young, director of the Queens office of the Department of City Planning, referring to the number of subway lines that run through the rapidly changing industrial area across the East River from Manhattan. "It is what we call a smart growth strategy."

The administration is studying the possibility of allowing taller buildings in a portion of Long Island City, according to Mr. Young, who was speaking at an annual event sponsored by the local nonprofit Long Island City Partnership. Developers also weighed in on on a change taking place in the neighborhood regarding the new housing that will be built. Since the recession, most residential projects near the Ed Koch Queensboro Bridge and mass transit lines have been rental units.

"With current land prices and construction costs ... doing rental at this point doesn’t make sense,” said Frank Monterisi Jr., an executive at the Related Cos., which built a large affordable-housing complex at Hunters Point South, a section of Long Island City along the waterfront. "Going forward, the [plans] that work will be [those] where you are selling condos at a pretty high value," he added.
Posted by Queens Crapper at 6:30 AM

Let's rename LIC and call it Manhattan East. Isn't it ?
Vallone and Van Bramer will rubber stamp higher density.
Vallone is a developer's lobbyist and Van Bramer wants to stop being a "bottom" and climb his way up the political ladder.
He might give lip service to being anti overdevelopment but he's down on his knees for any developer that passes him some cash.

Well so much for fireworks celebrating the birth of our republic. we used to be able to see it all over the community - now only the tower people with the lobby passes will get into the fun.

It just pisses me off that they make a campaign donation to Van Bramer or Cathy Nolan who say then nothing knowing that things are already at the breaking point and studiously remaining aloof while the rest of us suffer.

The very premise of modern day political leadership is false, 300% fake and failed, and the entire city council is now governed by an in-house edict that demands total allegiance and loyalty to a platform of Neo-Fascism and Neo-Bolshevism.

Hence, the entire system itself is rigged for privilege, private splendor and unjust enrichment, versus public squalor that includes: all betrayals of public trust, a dereliction of public duty, and a searing violation of the collective oats of public service that all lying politicians have sworn to uphold.

And, campaign contributions only fuel the scam for greater unchallenged power and privilege to continue duping, bilking, scamming, fleeding, swindling and hustling their always bereft constituents, all of whom are now left to their own devices---like vigilantism that was always a byproduct of failed political leadership in the first place!

The way it begins is the way it ends!

Did anyone ever check the capacity on these trains? Sure there are multiple lines in LIC, but either they suck (E train-always delayed and filled with homeless people, R train-rarely running) or they're packed (like the 7) or some combination of the two. So why add more people??

Quit your complaining about the "tower people". You can get a better view of the fireworks from Greenpoint ave in Sunnyside than by the water. You could even see them when they were in NJ from there. You could not from the water. I live in one of the towers but still might go up to Greenpoint Ave to watch them.

"put density where you have transit"
This Department of Planning idiot John Young has never ridden the 7 train or been packed on that narrow Vernon-Jackson station platform. This Mayor really belongs in a mental hospital.

I'd love to see these clowns at court square when a G train pulls in - the E/M platform is completely filled with people to a point where I'm surprised no one is getting pushed on the tracks... yet.

Oh - and I bet they won't add any first responders either. More high rises in a flood zone - always a good idea.

Isn't there any laws that compel removal or place on leave a mentally ill public servant? These people are dangerous and shouldn't be making decisions that will effect millions

Fireworks on Greenpoint Avenue. Sounds good to me. About what cross street please?

forget upzoning for residential. they need to start seeding the area for real white-collar job growth. the long-term value of LIC as a commercial hub VASTLY exceeds any short-term benefit to more luxury housing because it would provide a suitable commute for "higher risk areas" like jamaica and corona. like what they're doing in DUMBO/Navy Yard/Metrotech. make it happen in LIC.
-somethingstructural

Try Greenpoint Ave and 40th Street. OR 47th Ave and 40th. You should get a good view from there.