Council Members in favor of term limits - for community board members 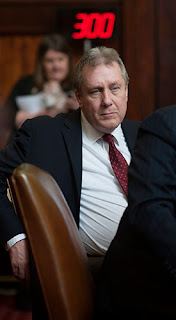 Queens activists and lawmakers are divided over a bill from City Councilman Daniel Dromm (D-Jackson Heights) that would institute term limits for community boards.

The bill, introduced in December, states that starting April 1, 2016, community board members cannot serve more than six consecutive two-year terms. The bill would not apply to current board members. Members are currently appointed by the borough presidents and City Council members.

There was a joint hearing for the bill by the governmental operations and general welfare committees May 11.

The bill has been heard and is under consideration to be heard by the full Council, according to a spokeswoman for City Councilman Ben Kallos (D-Manhattan), chairman of the governmental operations committee.

Supporters of the bill say term limits would help make community boards more representative of their communities and prevent a few people from dominating the boards.

“I sponsored Council member Dromm’s legislation to limit the term of community board members to protect our democracy,” Ferreras said in a statement. “Many elected officials are term limited for the same reason. As communities evolve, so should their representa­tives.”

Opponents of the bill feel that term limits would take experienced members off the boards. They argue that incompetent members could easily be removed.

If you believe in term limits, then remove the people who have stayed too long. Problem solved. (It's funny, but Danny has no problem removing people who have only served one term who disagree with him.)

Also, in many neighborhoods, no one wants to be on the community boards so there's no point in removing people and having a board with empty seats.
Posted by Queens Crapper at 12:20 AM

"Also, in many neighborhoods, no one wants to be on the community boards so there's no point in removing people and having a board with empty seats."
I don't find this to be true. There are more than 100,000 residents in each council district. They will never get the opportunity to serve on community boards without term limits.

How about an independent Inspector General to investigate political corruption?

"I don't find this to be true. There are more than 100,000 residents in each council district. They will never get the opportunity to serve on community boards without term limits."

Elmhurst has at least 10 empty seats on its board. Yet Danny Dromm removed Jennifer Chu without replacing her with anyone.

In most communities, community boards are seen for what they are: a waste of time, propagated by a bunch of political hacks and wannabes. Nothing you do on a community board changes a damn thing. All of your votes are advisory and overturned by the real government.

I gotta laugh at the youngsters who get excited that they are serving on a board thinking they are improving their communities only to find out what a complete joke it is.

As for Dromm's hand wringing - he has the power to remove people without term limits. So why doesn't he exercise it without pushing for yet more legislation?

Most community boards are tainted by a handful of members who are connected to construction/development or religious groups. If a conflict of interest exists , then a community board cannot be run effectively. A limit of 2 terms is enough otherwise complacency sets in and the impact on communities can be negative. Just look at LIC, Flushing, Forest Hills, and Jamaica. They are a mess.

And it doesn't matter at all. Let's say the CB votes down every bad building project. The BP & council member will be lobbied and it will be passed anyway. This has happened again, and again, and again...

Community boards are a waste of time and money. The whole concept needs to be re-examined and replaced with something more real and productive. CB7's advisory voting power is powerless. Look at all of the poor planning that has gone into developing their district.
I was once asked if I would be interested in serving on CB7 (about 1987). I declined, knowing then that my vote would be purely advisory and that if I stood in the way of county's plans I'd be dismissed. So what is the point? Community boards without any real voting power are just shooting blanks.

How many terms has the shady Chuck "follow the buck" Apelian served?
Too G-d damn many! How many printing contracts did his Prestone firm score from developers who went before the board with their plans to develop? Enough! And enough is enough!

Nobody gets the opportunity to serve unless they are the pick of connected politicians. Kiss Melinda Katz's ass and you can get appointed. Behave badly and go down to the dean of students and can expect expulsion. Community boreds only give the illusion of having a say in what should be going on. How much is spent on all of this window dressing? Millions! Dump the boards.

Dromm will be term limited out soon too.
Then what will the queen of Queens do?

Danny won't remove anyone because he does not want to appear being a hatchet man.
Prissy boy would rather have government do a man's job.

"As for Dromm's hand wringing - he has the power to remove people without term limits. So why doesn't he exercise it without pushing for yet more legislation?"

Because he wouldn't get his picture in the paper...

We need some real Homo Sapiens to stand up on two legs instead of crawling around on all fours in the city council chambers. I have not seen any yet. Dromm is a self serving wimp. This intro has got to be doing something good for his next political move up the ladder.

Danny Boy Dumb is a Hypocrite, yes with a capital H. Removing Jennifer Chu without replacing her is a great example. I hope the press one day really investigates this guy's past.


No position either in the public or private sectors should be for life including judges, senators and so on. Life time positions lead to tyranny and autocratic ruling. Just study some modern and contemporary history or read international news to learn about it. Also that diplomats, the police and politicians have a certain degree of impunity should be revoked and discontinued for good and the same should apply to affirmative action and the unions that have damaged the social structure and the economy of this great country of ours.

We have the 311 call system to log complaints and get information. Why do we need community boards???

And why are some district managers paid 6-figure salaries??? BS!

saw this in the NYTimes today...

Community boards, civics and precinct councils are unelected, boosterist phonies who should be charged with coercive racketeering under RICO.

I know this blog is somewhat old but I completely agree with everyone's posts on here. I have had this problem for over a year now. I get atleast two tickets a month and my sidewalk is completely clean. I live next to a middle school and a pizza place so I get all kinds of trash in front of my house minutes after I clean it up. Recently I set up cameras all around my house and caught the sanitation officer targeting only my house and speeding down the rest of my street after he was done writing his ticket. I am looking to petition the city about this issue. Please let me know if anyone would join me. I am glad to hear that I am not alone. Thanks