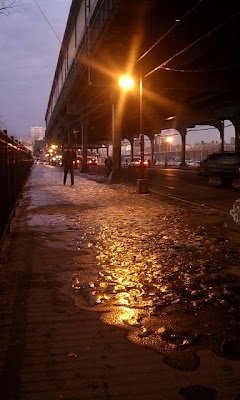 "Almost a year to the day after you featured the Wilpons' lack of neighborliness, it appears that they continue to exhibit the same disregard for pedestrians passing by the property they manage." - anonymous 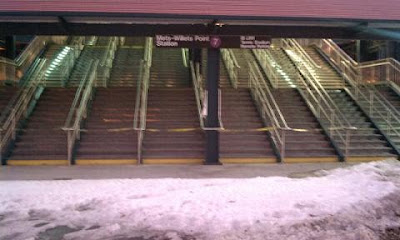 So people have to walk in the street. It's not like Roosevelt Avenue is dangerous or anything. Piling up snow in front of a major subway entrance in a park & ride - also not a big deal when you have a driver in a heated SUV waiting outside for you.

So long as the sidewalk in front of the entrance to their offices is clear, it's not a problem for Fred or Jeff. Hey, they already got what they wanted out of us schmucks, so why should they go out of their way to clean snow and ice? Or is this something the city is supposed to clean? Since neither party probably knows or cares, it's our headache instead. Enjoy.
Posted by Queens Crapper at 12:48 AM

The city must ticket them to comply just as other businesses and home owners are for their sidewalks.

Aw...f--k those Wilpons where they breathe!

They'll soon be losing their shirts....caught up in that Madoff scandal.

Steinbrener had class compared to these street thugs.

GO YANKEES and f--k the Mets too!

actually, I wonder - depending on their lease, the property owner my be responsible for cleaning those walks, and we all know who OWNS that property (aka NYC)