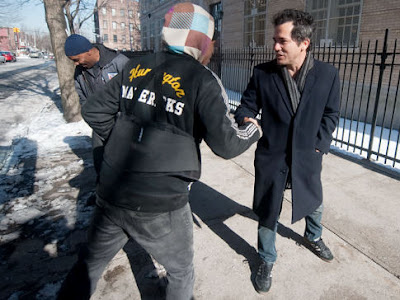 It's the coldest day of the year in New York City, around 10 degrees Fahrenheit, but John Leguizamo doesn't mind.

After all, it has been 11 years since the fast-talking actor, best known for his movie roles in "Carlito's Way" and "Summer of Sam," has returned to the predominantly immigrant community that raised him until the age of 19 and inspired much of his self-reflective work like "Ghetto Klown."

"I moved to Jackson Heights from Bogotá, Colombia, when I was 3½," says Leguizamo, who now lives with his wife and two children in the West Village. "I don't know how much is reality and how much is imagination, but I remember coming from a really bright, sunny place with a lot of white buildings and colorful attractions to this dark and cold area. But, in time, I grew to love it."

"This neighborhood formed me," he says through teeth that neither Hollywood nor Broadway ever bothered straightening. "It was a transitional neighborhood. People were just trying to make it and get out as fast as they could. But this was where I developed my sense of humor and discovered what I liked and didn't like."

"We used the word 'rumble' a lot back then," says Leguizamo as he strolls toward the 89th St. park where he used to hang out with friends. "There were a lot of gangs and they were always fighting over honor or something like that. They'd use chains, nunchucks and switchblades, but no guns."

So he calls himself a "Ghetto Klown", talks about gangs in the area and says it was full of people who couldn't wait to get out. According to some people, this other Jackson Heights doesn't exist and its all about the food. I'm guessing Mr. Leguizamo didn't grow up in the garden apartments...
Posted by Queens Crapper at 12:02 AM

I was born and raised in Jackson Heights and I don't know what this guy is talking about.

my wife and i would see two feature movies at the "POLK THEATER" on 90th street @37th avenue,during the 1960's, and listen to Bobby Hackett play his trumpet at the "MONTCLAIRE SUPPER CLUB.

The only "gangs" that were around back then were just cliques of guys hanging around in local parks, drinking beer, smoking pot and listening to Led Zeppelin. They got into occasional fights with one another, but they were far from rumbles. For the most part, they kept to themselves, and had verl little, if any, effect on the day to day quality of life in Jackson Heights. They were nothing like the local ethnic gangs we have now, just wannabes. This guy Leguizamo is talking out of his ass, trying to make Jackson Heights of the 70's and 80's look more ghetto than it really was.

um, maybe you guys were from different cliques? I remember the fear of walking down the streets of JH and Corona in the 70's & 80's.(well, only to '84 when we got the hell out of there!)

I remember being a very young child and listening to the radio in the car as my mom drove us to school and hearing reports of stabbings, killings, etc. in a place called Jackson Heights and wondering where that was.

I don't know about street gangs out there but didn't they used to have Colombian machine gunners out there doing hits on rivals cartels in broad daylight.

I remember him when he went to IS 145, I used to see both him and Lucy Liu (145 Alum as well) at Giannis Pizzeria on 82nd and Northern. Gianni's was a great place to hang out it. Gene Simmons also went to 145 as did Eric Holder.

Jackson Heights was the first place in Queens where white parents and black parents clashed in the 1960's over black kids being bussed into Jackson Height's public schools.

A little history: in the 1960's, Jackson Heights was very white and very Jewish. Walking through Jackson Heights now, it might be very hard to imagine the scene in the 1970's when little John L was walking around JH.

Besides the Polk, there was the Jackson, and the Earle.

Ron Jeremy? Please send him to me!

Yes I believe Leguizamo is fulla shit or his publicist is uup t something !
From what I remember Gene said a wile back the Leguizamo's were one of the first not only young but Hispanic family's to get into the Garden Apt building's.

Gene Simmons was a PS 145 (PS as it was called back then) student who came back as a teacher out of college. JH was turning to total hell
He lasted 3 months in the 70's wanting to "kill all the little pricks" woke up one morning said NO_MORE and quit.
He then formed a band "Wicked Lester" that later became KISS made $$ and got his mother out.

Genes mom now lives in Manhasset off Shelter Rock, its the neatest house well maintained high ranch on the block. She constantly brags about Gene and carry's his photo everyplace.

Such a down to earth guy who never forgets where he's from! Thank you for representing Latinos!

The Cloumbians started popping up around the late 70's and the drug dealing got bad during the 80's. The problems were confined to certain areas though, particularly around portions of Roosevelt Avenue. Despite its rapid degeneration and its infamy as a drug den, Jackson Heights in the 1970's was still far from the war zone that the likes of Leguizamo seem to want to portray it as.

Thank you for representing Latinos!

If you consider this guy the archetype Latino, then you and your people are in big trouble!

In the 1950's and into the early 1960's Jackson Heights had a great jazz Club called The Tune Timers. on Northern Blvd near 82 Street
Jazz Greats like Johnny Smith, Eddie Costa, Kai Winding, Dizzy Gillespie, and many other greats sat in on Monday night jam sessions
Jackson Heights was a fun place to live during that time
Nice people and a safe place

Jackson Heights in the 50s And 60s were fun times . As late 60s - 70s rolled in more of the RocknRoll and then Disco could be heard , along with that came the drug influx. Weed and Heroin in late 60s .... By. Mid-70s the cocaine cowboys came in ..... Great parks to hang out , lots of white gangs in 60s , started to become more integrated in 70s , and into the 80s ( South American, then Asian, Then Indo-Asian thru 80s and 90s..... After then sections were reverting to more young millennials in early 2000s . Great melting pot

This is what was going on in the 50's and 60's in Jackson Heights, Corona and Astoria! I was there! Don't know about later years.