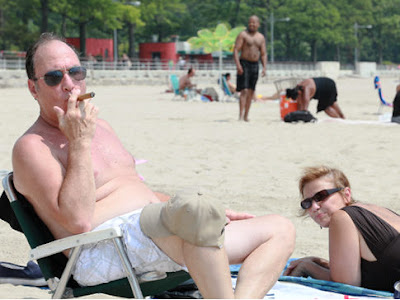 "The police will not be enforcing this. That's not going to be their job," Bloomberg told a caller to his WOR-AM radio show.

The mayor said cops don't enforce the law against smoking in playgrounds, and they're too busy fighting crooks and terrorists to crack down on park smokers, too.

"On the beaches there's some Parks Department people" to make New Yorkers comply with the new law, Bloomberg said.

Bloomberg incorrectly told his radio audience the idea came from the Council in the first place.

The ban was first proposed by his health commissioner, Thomas Farley, in September 2009 - and though Bloomberg balked at first, he eventually supported it.

"The City Council came to the mayor, but the City Council heard from the public, and it was the public that said, 'I don't like the cigarette butts in the sand and people smoking upwind. I have to breathe it.' "

Bloomberg's latest head-scratching comment comes after he bashed the Irish for being an "inebriated" bunch and encouraged New Yorkers to take in a Broadway show just after the Christmas weekend blizzard.
Posted by Queens Crapper at 12:59 AM

and do not forget his stupid excuse for the Times Square Muslim Terrorist bomber trying to detonate a car bomb,possibly killing hundreds of pedestrians, at the beginning of the theatre rush.

The public's gonna police it ??
Haa Haa lets see how many fights and beach brawls the cops are gonna end up with now.
$2 says somebody gets stabbed or killed over this by the end off the Memorial day weekend (May 31).

Proof Bloombergs senile or on drugs and needs to be removed from office!!
Its going to be an interesting summer. You wont need a $150 Broadway show ticket in Bloombergs Fun City. Letterman must be writing the jokes already

The intention is fine but it's to be executed (not) signaling that it won't be enforced. I am an ex-smoker who does not want to sniff cigarettes anywhere as I don't want to be enticed back to smoke. With that said, I always thought it was ludicris that smoking would ever be proclaimed illegal to smoke outdoors and still do and that it is completely unenforceable.

So here's the rub - a new law is put into effect and immediately the lawmaker declares that it will not be enforced at all - please follow> the problem is there are tons of laws already on the books that are not being enforced and should be: how about illegal aliens, how about illegally converting a dwelling without a permit, how about enforcing noise issues, no truck routes, sanitation etc > the thing that really do need to be addressed are not, so why add another and claim it's unenforceable? like I said, smoking outdoors made illegal is just one of those things that I would like but accept it is not the brightest idea to put into law especially when we cannot enforce laws that should be enforced in the first place. Name the infraction or laws that are not being enforced - there are 100s of them that deserve the NYPD, DOB,DSNY & FDNY attention to be enforced.

Could we have this list of all laws on the books but not enforced added to the official City Record?

WHAT FUCKING WORLD IS THIS GUY FROM?


Guy 1:Hey excuse me sir do you mind putting out that cigarrette.

Guy 2:Yo son did this nigga just tell me to put out my bogey?

Words exchanged, punches throw and now someones in jail because of citizen style based policing.

Does that include blunts?

I'll have a hit of what Bloomy smokes.

A withering glare, a wagging of the forefinger, and a sharp "tsk, tsk, tsk" will be all that is needed.

Smoke up his congestion pricing for relief

This is just to drive the weed smokers out of the parks.

Now where am I going to get my free contact highs?

Der Bloom-shit has been blowin' smoke up our asses for so long that it's made him afraid we're gonna do the same to him...so he's taken away our smokes!

Go stick a nice lit "Cohiba" up your butt Mike.

You can easily score such contraband on your way to your Bermuda compound.

I think you hit it right.

Now I know where I can hide my cigar!

Moby said...
Now I know where I can hide my cigar!

Make sure it's still lit...like you!

Betwixt your thighs you chose to fidget...
whilst casting your votes for Mike the midget.

We now all swing upon his gibbet.


We are certainly going to be blindsided by something devious such as congestion pricing - he is itching for this to pass and the State may like the revenue this time around. Beware strike back early - look to Egyptians for strength to protest our displeasures!

Beware strike back early - look to Egyptians for strength to protest our displeasures!

Yeah! Check out my pyramid scheme. It gives me plenty of pleasure. Hey!!! Whatdyawant? I'm only making a dollar a year off you suckers (on the books).

When the tee shirts come out I want one. I'm sure this picture is going to find it's way to pro smoking sites.

But they'll be driven to drink!!!

Yeah, just like public pressure rights all the wrongs the DOB let slide for the last 10 years in this FUCKING city.

Sit around and pass laws that you know will not be enforced and take our tax money to wipe your asses. City Hall and the City Council can all go wipe my fucking ass!