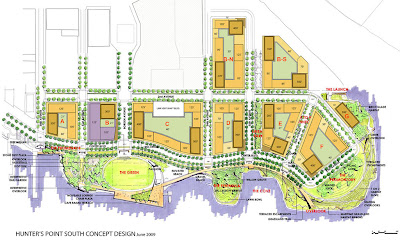 The Bloomberg administration announced Wednesday morning that it had selected a development team led by Related Companies to build the first phase of a development on the Queens waterfront, which, when completed, will be the largest middle-income complex built since the 1970s.

Related, and its partners — Phipps Houses, the largest nonprofit moderately priced housing operator in the city, and Monadnock Construction, one of the largest builders of such housing — will erect two buildings at what is called Hunters Point South with 908 rental apartments, at least 685 of which will be set aside for working- and middle-class families earning $32,000 to $130,000 a year.

The entire project, which was first announced by Mayor Michael R. Bloomberg more than four years ago, will offer subsidized housing for an unusually broad swath of working- and middle-class families. The city has invested heavily in the site, by buying this once industrial stretch of waterfront where Newtown Creek enters the East River for $100 million.

The city will also build a 10-acre park and install the necessary water and sewer lines for the entire site.

Stephen M. Ross, chief executive of Related Companies, at first hoped to persuade the Real Estate Board of New York, the powerful lobbying arm of the real estate industry, to build it on a nonprofit basis. But Mr. Ross, who then headed the board, had trouble persuading his fellow developers to take it on, and the city was reluctant to turn the site over to a single entity.

Rival developers complained privately that the city was likely to favor Mr. Ross because of his close ties to the Bloomberg administration.
Posted by Queens Crapper at 12:52 AM

Why are we building more housing in a recession where we have un-rented units. Stop already.

Another Related project? The mayor should be investigated for favoritism! Call the feds.

Who is going to build the infrastructure here? Did they think of that?

That doesn't sound too bad. Maybe ill get a reservation/spot on that waiting list.

From the Declaration of Independence: "...all men are endowed by their Creator with certain unalienable Rights, that among these are Life, Liberty, the pursuit of Happiness and Tax-payer assisted Domeciles."

Anytime, anywhere, anything is charged "less than market" - you will have more people who want it (i.e. "demand") than can be supplied.

Something else happens (i.e. "crap") to address the imbalance of supply and demand, and, boys and girls, a free, fair, and random lottery is never, ever, the solution chosen regardless of who is in power.

No infrastrure to support it

Yup, thats the place I want my taxes going to. I am glad my elected officals are looking out for my interests.

The first anonymous is right. So many new condo buildings across the city with empty units. Some developers are still struggling to fill apartments in those "luxury" buildings.

Waterfront middle-income is an oxymoron. To Bloomberg people earning 500K a year is middle income.

Didn't the mafia own that cement company land. Whey they wanted to build residential on it the city told them "NO WAY" for the reasons George stated.

A buddy of mine who works for the MTA in Coney Island, we used to play on that lot on 4th July ($5 donation to enter)

The underwater tube for the 7 train (below the pile of rocks) is also below it. Driving pylons to build towers would be a huge risk to 1000's of people in that underwater tube at any given minute.
That structure is already in danger like others from corrosion, the city hasn't replaced the anodes since the late 60's.

Lawn Bowl" on that photo is the cross river subway tunnel cap.
That tunnel is over 100 year sold
Put up towers ?
Does the mayor not care about about all the people from Queens in those trains going to and from the city ?
No honest or sober team of engineers would approve of this

Does the mayor not care about about all the people from Queens in those trains going to and from the city ?


What is the big deal? If our electeds say its ok, then everything is fine.

By being so polite all the time to them, and sending them to office at 80% we say that is fine with us.

The tunnel for the No. 7 line is to the north of this project. It runs under 50th Avenue, and it has had all kinds of piles driven aound it already. The tunnels under this area are the LIRR tunnels leading to Penn Station and the Queens Midtown Tunnel.

The old tennis courts on 46th avenue sunk into the river when the land was sold and construction sank the whole plot of land. Today it is useless and the river is right up against the City Department Of Purchasing Building to the south and the Con Ed training facility to the north.

You would THINK SOMEONE in these city agencies that propose more over development would have considered this possibility for Hunters Point South as well, considering the ENTIRE stretch of land is number one) unsound and built on landfill / swamp, and number two) one of the most toxic parts of our entire country with a a long history of carcinogens being dumped into it.

Oh, I forgot, they're "middle class".