On Saturday morning (1/29), a dozen NYers held a protest against Christine Quinn at an entrepreneurs conference in downtown Manhattan. We were there to inform attendees that their keynote speaker has been exposed on multiple occasions for budget and campaign corruption. (Here's an article that concisely explains one of her scandals that is still being investigated by the U.S. Attorney's Office.)

Because the people at this particular event do not have a vested interest in her success, they were more than willing to look at our posters, ask questions and read our handout. Even the NYPD officers assigned to our protest read our information (see picture below).

To avoid having to walk past the protesters, Quinn's chauffeur drove her and her entourage to a back door. However, Quinn posted one of her staffers at the front door and one of her security guards in the street to give us the misimpression that they were waiting for her SUV to arrive. Instead of concocting elaborate plans to avoid our peaceful protest, why doesn't Quinn just hold her head up high and walk right past us?

Donny Moss (on behalf of the organizers) 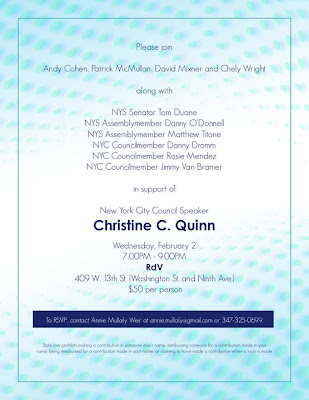 INVITATION TO CAMPAIGN FUNDRAISER FOR QUINN THIS WEDNESDAY NIGHT. WHAT IF THE THREE LGBT COUNCIL MEMBERS ON THIS INVITE REFUSED TO BE LISTED? 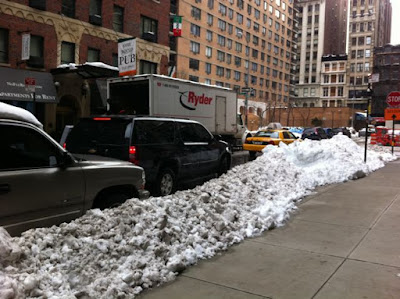 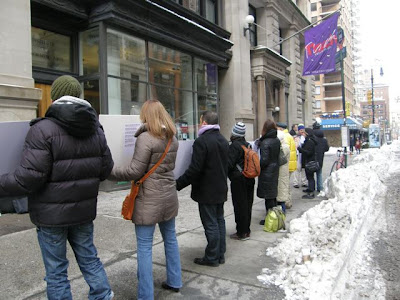 PROTESTERS LINED UP ON B-WAY 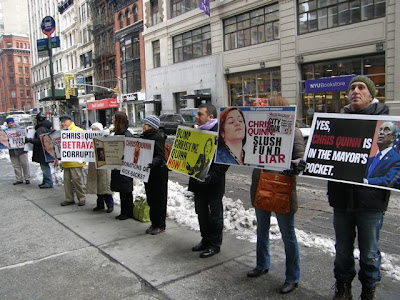 PROTESTERS AT THE ENTRANCE 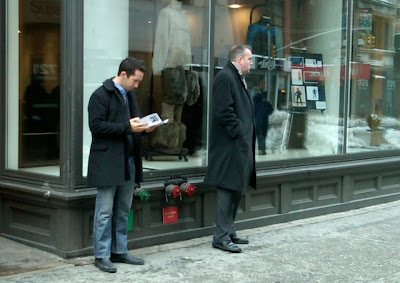 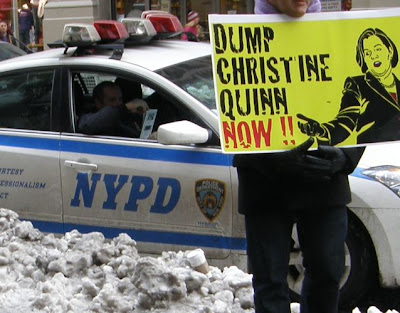 
"One NYPD officer pushed me to get me to move, even though we were neither blocking the sidewalk, nor blocking the entry to the restaurant/night club.

Looks like Quinn is using NYPD/city resources for campaign activities again, plus using NYPD to intimidate protesters. If I didn’t move, the cop said he was going to arrest me. Meanwhile, I did nothing to provoke the cop. I was just holding up my end of the banner. There was no barricaded area, to show that there was a security zone for the event.

I think Quinn is reaching a new and desperate low, if NYPD are using aggravated intimidation against protesters."

I bet no one in that line is from Queens.

We cannot be so impolite when it comes to our hard working forward thinking electeds, can we now?

Aw come on crappie, posting this just makes us uncomfortble and wanting to change the subject.

Post something about stray cats or tree limbs in Douglaston so the folks in Queens can be inspired to post something.

all of the names on the post are members of the n.y.c. COUNCIL PROGRESSIVE CAUCUS .

who do the protesters represent ?

Why would the first two anonymous posters insult the voters of Queens? We didn't re-elect Quinn like the enlightened voters of Manhattan.

that fa pig , vote her out please

As if the NYPD needs a special reason to intimidate peaceful, orderly protesters... It's routine.

man,I am so distressed that WE missed this and yes we are from the bOrO of qUeens and have big mouths....and are FED UP WITH nyc council. !!!!!! sorry for the "run on" sentence structure-

Not voting for Quinn or the lefties who "support" her.