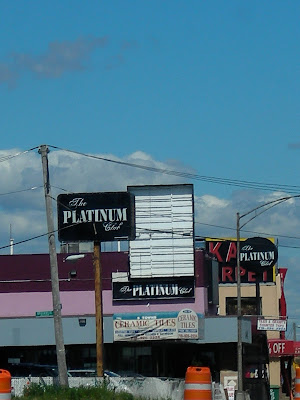 For months, a large billboard advertisement depicting a scantily clad woman hovered over Rockaway Boulevard in front of the Platinum Club, a Queens strip club that faces the street on the western side of the busy roadway. Foot and vehicle traffic passed underneath it every day, exposing everyone who passed, including young children, to its lewd imagery.

Today, New York City Councilman James Sanders, Jr. (D-Far Rockaway) has announced that the billboard, which had been covered up for weeks after the club was served with an eviction notice for failure to pay more than $150,000 in back rent, has now been completely removed. The Councilman had joined with community leaders to fight for the removal of the advertisement which he felt strongly was inappropriate and indecent given its location and depiction.

“We welcome all businesses and store fronts to our community, provided they intend to be a good neighbor,” said Councilman Sanders. “But we will not allow crude, offensive depictions to pollute our community. Our goal is to have the very best for ourselves and the children of our neighborhoods. When we allow crudeness and mediocrity to become the order of the day, we grow accustomed to losing. This time, we took a stand for common decency, and common decency won.”
Posted by Queens Crapper at 12:15 AM

Victory, export your methods to other neigborhood groups!

Hey Sanders, when are you going to go after the Queens Tribune for their lewd whore ads? The Queens Tribune's sister publication, the SE Press, is widely disseminated in your neighborhood. Schenkler and Nussbaum are hauling in big bucks via these publications. Have some balls, man.

I thought George would visit these family "establishments".

That area is disgusting anyway.

Excellent job Council Member Sanders. Now, can you work on the New York Daily News, Post and other newspapers not to print pictures of women scantly dressed too.