Time for another edition of "Phony Stats with Joel & Mike!" 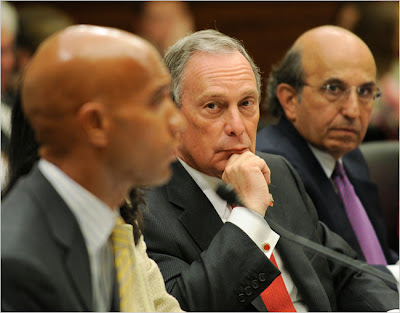 Two years ago, Mayor Michael R. Bloomberg and his schools chancellor, Joel I. Klein, testified before Congress about the city’s impressive progress in closing the gulf in performance between minority and white children. The gains were historic, all but unheard of in recent decades.

“Over the past six years, we’ve done everything possible to narrow the achievement gap — and we have,” Mr. Bloomberg testified. “In some cases, we’ve reduced it by half.”

“We are closing the shameful achievement gap faster than ever,” the mayor said again in 2009, as city reading scores — now acknowledged as the height of a test score bubble — showed nearly 70 percent of children had met state standards.

When results from the 2010 tests, which state officials said presented a more accurate portrayal of students’ abilities, were released last month, they came as a blow to the legacy of the mayor and the chancellor, as passing rates dropped by more than 25 percentage points on most tests. But the most painful part might well have been the evaporation of one of their signature accomplishments: the closing of the racial achievement gap.

First order of business: fire Klein.
Second: call Bloombucks out as a liar and dump him as well.

“Over the past six years, we’ve done everything possible to narrow the achievement gap — and we have..."

If that ain't two of the most sour faced lookin' Jews I ever saw.

Translation..."Go shit in the ocean"!

Truth is, the students are doing much worse--even with the new state adjustments. When I was grading the English tests, we were forbidden to fail anyone without a supervisor coming over and approving it. They always found a way to pass the student--sometimes even with a high score! It was sickening.

Queens Teacher , I'm a bit confused my son Got 4.0 in Math and Science but in English a 3.69 he's the highest reader in school and this makes no sense to me:( Maybe you could enlighten me?

As you can see there were 3 parts to the test:) 99% correct for the first two parts but " Critical Analysis and Evaluation a 57 WTF:( I'm confused here:(

How many "failing schools" were closed based on that fake data?

How many good teachers lost their jobs?

How many lousy teachers got fat bonuses?

You're on to something here, Anonymous. I read similar comments on another blog. All they have to do to lower the "achievement gap" is simply make the tests SO FREAKING EASY, that even the dim-witted black and Hispanic kids can pass the damn thing. Voila! No "achivement gap"!!

@Cherokeesista:
Even though he is the highest reader in the school, he could have answered a question wrong. Just answering ONE wrong on the critical thinking part could pull his grade down.

Any data that comes out of the Bloomberg administration is false and contrived.


SAD,SAD,SAD, AND SADDER......don't the public school teachers and educrats and union bosses need more tax money to continue this failure to our children?
the democrat congressional delegation from n.y.s. just voted to spend $26 BILLION more for this failed
system,last month.......REMEMBER IN NOVEMBER