Busting out the blowers 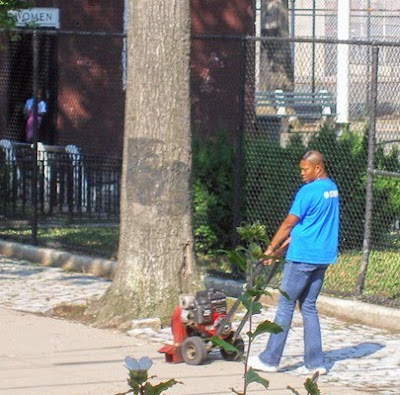 "Ah...autumn. Can you feel it in the air? No? Neither can I, but it must be just around the corner because starting a week and a half ago it was the beginning of leaf-blow and vacuum season at the Maurice Fitzgerald Playground (106 Street & Atlantic Avenue).

This is at least the third (and probably the fourth or fifth) consecutive year that they've dragged out these giant noisemakers this ridiculously early in the season. Why? That's what I'd like to know! I have complained in the past to 311 about this (especially when they start using these things before 7 AM) and I've gotten this response:

"We are aware of some of the drawbacks of leaf blowers, but, like other mechanized equipment, they enable us to maintain parks and playgrounds more efficiently. Leaf blowers help us keep thousands of acres of parkland free from litter and debris that would otherwise limit public use and enjoyment of open space."

Standard reply stuff, but it doesn't explain why rakes and brooms are good for the rest of the year, but somehow insufficient for use from August to November - and - equally important - why they have to be used at the crack of dawn?

Don't get me wrong, when Autumn really kicks in and the leaves fall by the buckets, I don't begrudge the park workers using the means at their disposal to collect them, but we've just had three days of rain and there's no pile of leaves or debris to pick up in the park. It's long about time that someone in charge at the Parks Dept. demonstrated some common sense (and courtesy) to us long-suffering residents who live around this playground.

Thanks for letting me vent.

PS Are those park workers covered for damage to their own ears or working with mechanized equipment?" 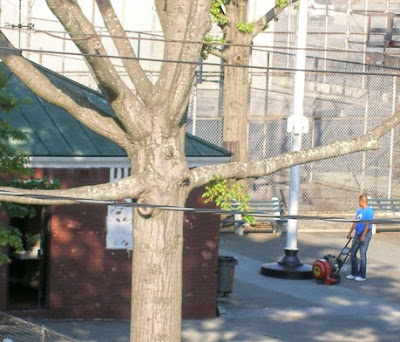 Isn't there already a law that prohibits the use of mechanized equipment (lawn mowers, leaf blowers) before a certain hour? Is it 8am? But, as always, there is no enforcement.

I've always wondered why can't these blowers be fitted with a muffler? I know muffler technology exists as I have one on my car.

What I love is that they blow stuff into the street. I live across from a park and I am responsible to sweep 18 inches into the street yet after the park staff comes by I have to go clean up after them too!

The Maurice Fitzgerald Playground has been a pain in the backside for many, many years to the residents that live around it.

Besides the noise from Parks Dept. equipment, there's garbage dumped on the street from those en route or leaving the park, year-round midnight basketball, someone (usually groups) "just hangin'" (read: loud intoxicated nuisances) long after the park has "closed"...

I could go on, but you get the picture (and have heard it all before).

Yeah, blow your crap over MY WAY so YOU don't have to pick it up!