Stay off the sidewalk! 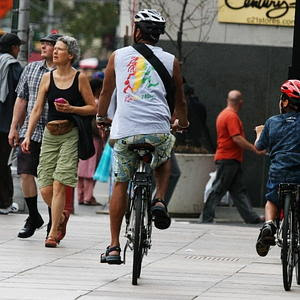 Manhattan cyclists, be warned -- obey the rules of the road or else.

The NYPD has declared war on reckless bicyclists, slapping cyclists with summonses for everything from riding on the sidewalk to near-misses with pedestrians to disobeying traffic signals and other rules of the road.

During the previous 30-day period, cops slapped cyclists with 240 summonses, or about eight a day. Reckless cyclists are the No. 1 quality-of-life complaint in the area, police said.

"The elderly pedestrians feel like they are taking their lives in their hands, even when they have a green light," said a top police official.

The summonses require a court appearance, and the fines are set at the discretion of the judge -- but they usually begin at about $50 for first offenders.

Citywide, police have issued 15,455 summonses to cyclists so far this year.
Posted by Queens Crapper at 12:19 AM

I can't wait for the pro bike buttheads take on this one.

Or else? Or else what? The day the cops crack down on bicycle atrocities of any sort, I'll eat my hat.

Oh they will crack down all right, for about a week or two. It won't take that long for the local rabble rousers to scream facism, sexism, racism, bike-ism etc. Soon after, some bicyclist will get run over by a truck while trying to flee from a cop trying to pull them over. The dead bicyclist will be martyred, and the cop will be suspended, awaiting trial and facing jail time, loss of his or her job and house, and facing a million dollar lawsuit from the deceased's family.

This is why snipers are necessary on all rooftops. Cyclists are the worst

REQUIRE LICENSE PLATES FOR ALL BIKES!

This way a pedestrian can properly ID a reckless biker (be they on the street or sidewalk) then adequately be able to turn in a substantial complaint to the NYPD!

Now let's hear some bikers complain about my suggestion!

I've already used my cane to unseat a couple of unruly bikers.

A deft thrust at their spokes and they go tumbling.

It all happens so fast (since I've still got my great martial arts reflexes) and nobody sees much.

Nothing's happened to me so far from "Johnny law".

After all I'm a poor weak senior citizen who was almost run down by a bicyclist.

In some parts of Europe, bike lanes are built into the sidewalks NOT the streets and people and cyclists respect each others space.

In Europe, people also wait for a green light before stepping into the street.

In New York, dumb assed trust fund kids glued to their iPods and iPhones don't give a shit if they're hit by a cab running a red light. They'll just have DADDY pay for their medical expenses.

i bet LINO got all of his fixed ?