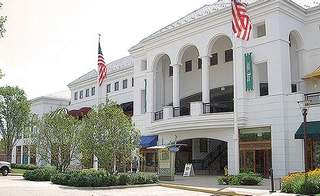 Nearly 18 months after lenders seized The Shops at Atlas Park when its developer defaulted on a $128 million loan, a new life for the Queens mall is close at hand. Foreclosure proceedings are expected to be completed in the next two months, clearing the way for lenders—French banks Société Générale and Calyon—to sell off the property and bring in new owners and ideas.

For residents in the surrounding neighborhood of Glendale, it's been a disappointing four years. Opened with great fanfare on the former site of the Atlas Industrial Park—one of the largest manufacturing centers in the city—the 25-acre retail development initially seemed like something from an upscale retailer's dream. The 400,000-square-foot center featured pristine whitewashed stucco buildings, lush lawns, gurgling fountains, stately magnolia trees and a handsome outdoor promenade.

In retrospect, it was simply all a bit much.

“If you put it in Boca Raton, you'd have a beautiful mall,” says the new court-appointed receiver for the property, Paul Millus, a lawyer with Snitow Kanfer Holtzer & Millus. “But you're in Glendale, and that set it back significantly.”

“We've weathered the storm,” says Mr. Millus. “All we need to do now is get through the foreclosure, close the door on uncertainty, and then great things will happen at Atlas Park.”
Posted by Queens Crapper at 12:26 AM

Prediction: Nothing "Great" will happen at Atlas. It will continue to be an ill conceived poorly planned pain in the ass for Glendale residents

“But you're in Glendale, and that set it back significantly.”

Didn't residents of the area tell Hemmerdinger for years that it was wrong for the area?

You have to wonder what they were thinking. Most folks don't even know where Glendale is, much less be able to get there. This mall was similar to those all over the country-- but those have high visibility directly off a highway. Also, they're in areas where there is not much else, so they're a destination. No one is going to go to Glendale to spend the day!

Hemmerdingers Dream (Glendales Nightmare) was to open the spur of the Long Island Rail Road behind the mall in the hopes that folks would come in from Manhattan to shop at his mall. Damon certainly isn't the brightest bulb on the Hemmerdinger family tree. So because of this family idiot Glendale is stuck with the giant white elephant.

His dream actually is to develop the parking lot next to the mall into condos.

Condos! more Queens Crap. When Hemmerdinger was the Savior of Glendale the family was referred to by none other than Dennis Gallagher as "Responsible Developers" at the opening of the mall. Seems to me that responsible developers is an oxymoron. Will the recent down zoning of the area have any effect on Hemmerdingers plans? Stay tuned.

Tacky overdevelopment and third world atmosphere is in its future.

This is Queens, right?

Atlas Park was not targeted for residents of Glendale/Middle Village. There's plenty of crappy retail options for them. It was targeted to Forest Hills residents who own homes and who have cars; they're the ones who would shop in Manhattan or the Miracle Mile.

It would be a damn shame if Atlas Park became just a mini-Queens Center (a/k/a ghetto mall).

Forest Hills people have enough big box retail to choose from. No one wants to go to Atlas Park. What a joke.

It was targeted at Forest Hills === and Middle Village/Glendale. All the studies that they kept pointing to while they were building was the amount of money that the people in the area had (that it was more than the same area around the Miracle Mile)-- what they didn't consider was that the money was in the hands of older German and Italian residents who have their assets in real estate, and were not going to go to "Coldwater Creek", "Chicos" and "waste" their disposable income.

The fact that Glendale residents prefer low-end dumpy stores to nice, mid-scale shops and restaurants is amazing. That Amish Market was excellent. Sad reflection of Glendale and Middle Village.

No one prefers low end, dumpy stores-- what they prefer is a choice. "Coldwater Creek", "Chicos" have a pretty limited selection and quality-- fine for the Midwest. Steinmart was weird-- carried clothes from previous seasons at a slight discount. If they had had a conventional department store as an anchor (i.e., Macy*s), and other stores that the residents of Forest Hills, Middle Village and Glendale shop in (i.e., convential national chains-- all found at Queens Center or Roosevelt Field), they might have had a shot. Plus they should never have charged for parking. No one argues that you have to pay for parking at Queens Center-- it's prime real estate-- but Atlas Terminals in Glendale, surrounded by cemeteries $3--please. If you have a car, you drive to Roosevelt Field, where you have choice.

Look the demographic this is aimed at is being systamtically hollowed out in Queens - has been for 40 years.

Everything from neighborhoods to civics to clubs to churches to restaurants to entertainment venues to shopping areas are slowly turning 3rd world and ghetto.

But hell, you can say that about the country for that matter.

Where's the Bimbo who's been advocating for an Apple Store as Atlas' salvation?

If you want shopper traffic, just put a walmart there. People will come in droves. Make it one where they sell food. People will shop there. Walmart also has a very reasonable prescription plan for seniors.

To quote a prior posting...

"In Manhattan or Brooklyn, a bodega becomes a Zabar's. In Queens, a Zabar's becomes a bodega."

"The fact that Glendale residents prefer low-end dumpy stores to nice, mid-scale shops and restaurants is amazing. That Amish Market was excellent. Sad reflection of Glendale and Middle Village."

Bullsh1t. The reason the stores left was/is because Atlas/Atco was charging Manhattan rents for Queens Properties.One of the first business's to fold was Pasticcio the restaurant.Damon Hemmerdinger owned a piece of it and couldn't convince his partners to hold on. Gimme a break it was poorly planned and ill managed piece of Queens Crap of the first order.

I wish they'd still put in that LIRR stop.

Why? It's not getting you to the city.

Just say NO to Walmart.

They have systematically killed ALL mom & pop stores in this country. They do not pay their employees well and their benefits SUCK.

Go work at Walmart yourself and see if you can make a decent living without working 1 or 2 more part time jobs before wishing that cancer on NYC.

yea. i don't really get the paid parking part. that's just a real turn off. i try to go starbucks there and the 15 minute parking is constantly filled.

at least give people 1 hour parking for free.

Where do people get this stuff?

Hemmerdinger the original owner of the land itself and principal in the bankrupt partnership will scoop this property up at a bargain prices vs what he originally invested/lost. Thus he will be the big winner as few others will be interested in this property in this credit sparse environment.

What would be significant, is a developer reconfiguring most of the property save 2 buildings is to bring Walmart to this site. Yep you all howl at this suggestion, but at least you will have the lowest cost general store operator that delivers the same goods found elsewhere but at lower prices to you, including food.

In any event the movie house, Chillies, NY Sports Club and Borders are valuable destinations for local residents and are viable businesses to retain.

"Atlas Park wasn't charging ANYWHERE NEAR Manhattan rents. They weren't even charging Austin Street level rents.
Where do people get this stuff?"

from the business owners

Very simply, as someone posted earlier, you can't ignore the first rule of real estate - location, location, location. Unless one has a very unique anchor retailer, that people are known to travel for (Fairway, Costco, IKEA), a bad location can't be overcome.

Atlas Park had quite a few negatives:

Atlas Park is a classic textbook example of what to avoid when building retail.

Wow, smacking down Glendale, Actually us Glendale residents are pretty smart in our avoidance of this mishmash of stores (theaters, Borders, NYSC, eateries excluded). And charging $3 to park is ridiculous.

It is still located in the middle of nowhere near a bunch of cemeteries. Is this conducive to shopping? Build multi story burial crypts. That would work the best.

I think that Atlas shrugged and dropped the ball on Atlas Park.