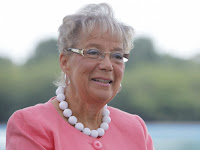 Queens borough President Helen Marshall sure is more than ready for her closeup - and it's costing taxpayers a pretty penny.

The pol's office revealed Thursday it's renewing a local shutterbug's $85,000-a-year contract to photograph her at events and in her official duties.

The vanity project is paid out of the borough president's discretionary funds.

The contract, awarded to Whitestone photographer Dominick Totino, was announced in the City Record.

He added that while Totino can earn up to $85,000 in assignments, the borough president's office paid him less than $50,000 in each of the past two fiscal years.

Totino has held the contract since 1997. He once described Marshall as very photogenic.

I like the Wilma Flintstone pearls...
Posted by Queens Crapper at 12:40 AM

Totino hauls in this taxpayer dough WHILE doing his other gigs. This is a part-time job.

Hey "talented" Totino. When are you going to publish those pix of Marshall taking a dump in the ladies' room?

How does this work? There's 85G's "on the table". Totino gobbles it up assignment-by-assignment?

If she was paying me 85,000 I would call her photogenic as well. But I wouldn't be able to live with myself for very long, and would most likely slit my wrists in the bathtub.

He'd have to be a helluva photographer to make Helen look good...

50k a year (the amount he actually takes in) is just a decent wage for a photographer.

Plus, unlike the politicians he shoots, at least actually WORK is produced.

Those are her hemorrhoids!

What an ass she is!

georgetheatheist said...
This comment has been removed by the author.
Tuesday, August 24, 2010

Would somebody please explain to me what this moron actually does? -besides cutting ribbons, giving out plaques, shoveling dirt with a hard hat on all the while getting her picture taken while doing so?

It's a PART-TIME JOB. No heavy lifting.

Marshall's as dumb as me!!!

85k??? wooow....nice, for a few hours worth of work. i shoot politicians at events. i get hired per event and there is always a budget. to get the job again i try to be under that budget. i have to carry 4 lights (heads and stands), a backdrop, seamless paper in two colors, a battery pack. it's a lot to log around......85k....wooow

Hey Dan Andrews. Would you please explain to the readers just how Totino gets paid after he photographs our illustrious nitwit? You hand him cash? He submits an invoice? He gets a 1099
in the beginning of the year? Does he bill by the hour? If so, how much? Does he get a day rate? How much? A half day rate? How much? He hands out freebie photos to the subjects? Or does he charge them for 8xl0's?

Just how do you work all of this? We taxpayers would like to know.

"It's a PART-TIME JOB. No heavy lifting." Obviously this anonymous poster hasn't a clue.

Dom is a good guy who spends hours waiting around for Marshall to show up... late... to events from early morning until late evening... when needed.

And check the numbers, smartass.

Does he bill for this down time? Hanging around doing nothing?

Isn't there supposed to be bidding on city contracts?

A few more days Totino, Andrews, and Marshall and your photo racket you think will be in the Queens Crap archives. ("Whew!" ) But we know all about this taxpayer scheme and we don't forget.