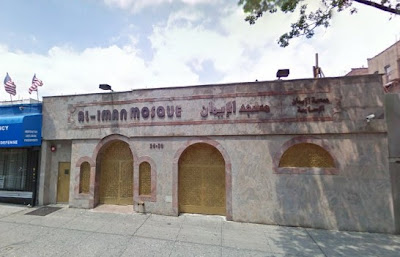 An apparently drunk man was arrested for shouting anti-Muslim slurs as he urinated outside a mosque in the Astoria section of Queens.

Omar Rivera was charged with criminal trespass after worshippers at the Al-Iman Mosque on Steinway Street subdued him Wednesday night.

Holding a beer bottle, Rivera burst in during evening prayers. He allegedly shouted anti-Muslim slurs, calling the worshipers "terrorists," then flashed his middle finger and urniated outside the mosque.

Two worshipers subdued him and called 911.

Rivera was charged and taken to a hospital for psychiatric evaluation.

The mosque said earlier news reports that the suspect urinated on prayer rugs was not inaccurate.

UPDATE: So apparently this may never have happened...

ASTORIA, N.Y. (WPIX) - An intoxicated man is accused of urinating outside a Queens mosque Wednesday night during a prayer session, according to New York City police.

The disturbing incident unraveled at the Iman Mosque on Steinway Street in Astoria when witnesses say Omar Rivera "came in with a beer bottle in his hands" and was "clearly very intoxicated."

They said they believe the incident was an unintentional act of intoxication and wasn't directed against the mosque or Muslim community. In addition, they claimed Rivera was not charged with criminal trespass and was instead charged with pubic urination.

Two men in the prayer group were able to subdue the man and brought him into a back room before calling authorities.

Police took Rivera to the hospital for a psychiatric evaluation. Officials at the mosque said they are offering Rivera any help he may need.
Posted by Queens Crapper at 12:30 AM

Poor Omar Rivera. This is what happens to you, when you watch to much FOX 'news'.

yes it has nothing to do with being drunk.

The drunk guy was not too far off the mark. The "worshippers" were celebrating and handing out candy outside the mosque on 9/11/01.

how the hell did we end up with all these muslims and mosque's in new york city?!?!?

The same way we ended up with Catholic churches and synagogues. There was a time when the same types of nuts thought the papists were here to take over and ruin America and Jews were aiming to take over the world. Islam is not our enemy. Al Queda is.

The same way we ended up with Catholic churches and synagogues. There was a time when the same types of nuts thought the papists were here to take over and ruin America and Jews were aiming to take over the world. Islam is not our enemy. Al Queda is.
---
The Democratic machine would have brought in Nazis and Communists if it meant they could be reelected.

That mosque can burn for all I care. I heard stories from numerous friends that they were indeed celebrating on 9/11.

1. Now two members of the machine's teams - the gays and muslims - are are making common cause with the mosque - hehehe boy oh boy if the sharia law was imposed on us would the gays howl.

2. note the passion of comments and the number of views -

if you put up a bulding five inches from someone's window

or had hookah smoke making your apartment an ashtray

or had samba music pounding the block till 3 AM

you would get a yawn, and if you persist, a snarky comment you should move.

Tell me the machine does not have a big thumb on that blog.

Maybe we should try to understand the "root causes" of Omar Rivera's actions. Perhaps Mr. Rivera can trace his ancestry back to Spain, and he's upset that Spain was once under Moslem rule. Maybe one of his female ancestors was captured, and became part of an Emir's harem?

Isn't it funny how whenever a member of the "Tweeded" class commits a crime, the press drags out all these ivory tower intellectuals and psychologists to try and "explain" why some "person of color" nut job did something.

Colin Ferguson shoots up the LIRR, and all of a sudden we're supposed to "feel his pain" because some 83 year old white lady looked at him funny when he was 15, or none of the white girls would date him.

Yet when some white nut job does the same, the "intellectuals" and psychologists suddenly blame Fox News, the NRA, and Monday Night Football.

Maybe our resident "intellectual" and armchair psychologist Michael Bloomberg can explain this one? He did a GREAT job speculating on who parked the car with the explosive device in Times Square.

THE ISSUE GETS HEATED ON ASTORIANS.COM!!!!

the last time I checked it was perfectly well within the rights of self expression to ban a radio host and the businesses that fund the radio host.

AH, OH REALLY? ARE YOU TALKING ABOUT 'SELF EXPRESSION' OF A SELF APPOINTED KING OR PERHAPS A PARTY BOSS?

Thats not censorship. It is called protest, and every american, left or right has the god given right to engage in such activities....and both sides have. they will continue to do so.

THOWING SOMEONE OFF THE AIR (OR PERHAPS SHUTTING DOWN A BLOG) IS AN EXPRESSION OF 'PROTEST?'

BELIEVE THAT AND A CALLING THE IMPACT OF A ILLEGAL IMMIGRANTS AS A VIBRANT DIVERSE BENEFIT THAT WOULD MAKE A COMMUNITY OUTSTANDING,

ARE THINGS YOU WOULD BELIEVE, TOO.

Again, if someone says I do not agree with you, and I am going to take action to demonstrate how much i not agree, it is not an attack on your rights. its the price you pay for living in a free society.

OOOUUWWW! A CYBER THREAT. GOTTA WATCH THIS ONE, BOYS!

That mosque near Ground Zero that Bloomberg supports is going to become a magnet for suck kooks if it gets built.

Oh, you mean he wasn't a white right winger?
Just like the little dweeb liberal in the cabbie attack.
The liberal news must be so disappointed.

"Just like the little dweeb liberal in the cabbie attack."
They don't have any liberals in Brewster, NY. How did you ever get the idea, that this scotch drinking, fat rich white kid, going to a private university, with a 1960's style hair cut is a liberal?

because he belongs to some peace and tolerance organization

They don't have any liberals in Brewster, NY.

Really? A certain "liberal" who frequents this blog, likes to boast how he lives in zip code 10021, and how the residents there donated too much money to John McCain.

By the way, where is Lino?

How did you ever get the idea, that this scotch drinking, fat rich white kid, going to a private university, with a 1960's style hair cut is a liberal?

Oh, maybe he actually peruses news sources other than the usual suspects. Such as this one:

But as often at the intersection of politics and violent crime, the story doesn't appear to fit any easy stereotype: The alleged assailant, Michael Enright, is — according to his Facebook profile and the website of the left-leaning media organization Intersections International — a student at the School of Visual Arts and a volunteer for Intersections, which recently produced a statement of support for the Park51 project and is funded by the mainstream, liberal Collegiate Church of New York.

Isn't this freedom of expression? Organizations like ACT UP do this regularly at St Patrick's Cathedral.

Organizations like ACT UP do this regularly at St Patrick's Cathedral.

Yes, and they also get hysterical and interrupt the church services, and also take the communion host and throw it on the ground.

I don't think ACT UP would do something like that to the "religion of peace".

Isn't this freedom of expression?

Funny, because just over a year ago, the "left"/gays had their panties all in a bunch because the Mormons were encouraging voters in California to oppose gay marriage. "Lefties" were getting hysterical and protesting at Mormon temples.

Now the "left" is suddenly all in favor of religious freedom, and have embraced the mosque and the "religion of peace".

Maybe the "lefties" should ask the "religion of peace" where they stand on gay marriage?

No, that would make too much sense!


You can warm my bed any time you wish. In the mood for a hot political discussion.

God Bless Mr. Omar Rivera. Hope he'll be treated to a snazzy ride home in a Chrysler Cordoba with its plush seats made of fine Corinthian leather.

What comes around goes around.

i don't buy this bs for 1 minute and anybody familiar with mosques knows you cannot simply walk in,that their door would be unattended....never mind stinkin drunk,can of beer and his SHOES STILL ON--and get that far to their moonroom rug arena.. most this guy did MOST LIKELY was wet the sidewalk outside...and YES they did jump for joy 911-plenty eyewitnesses--

This is 'affectionately' known in the neighborhood as 'the terrorist mosque' in case someone needs a history lesson. Always has been since 9/11. They indeed gathered and celebrated in the street on 9/11.