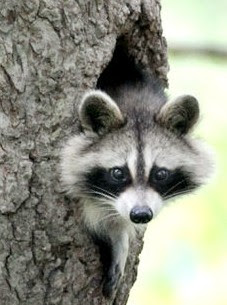 New Yorkers fed up with the antics of the city's furry masked bandits could get some relief under a bill that makes it easier to capture and release raccoons.

The bill, being unveiled today by Councilwoman Elizabeth Crowley, requires the city to trap raccoons anywhere in the five boroughs simply at the request of the public.

And in a conciliatory nod to the raccoons, the city Health Department would be encouraged to humanely release the critters. Under current guidelines, most trapped raccoons are euthanized because they can carry rabies.

"You can't pick up and relocate every animal you see," said Bobby Horvath, a licensed wildlife rehabilitator. "They are in the city, and you have to learn to live with them. They will have less contact with us if we don't invite them."

And where would they "humanely release" them? This is a city that sends more cops after a coyote than after a crook, gasses geese and traps raccoons, but lets winos crap on the sidewalk...

Animals have been living here long before we have - why do we act like this is some kind of an invasion? They adapted to us. Let's adapt to them and peacefully coexist. If you don't leave food out where they can get to it, they won't bother you.
Posted by Queens Crapper at 12:08 AM

There are TOO MANY PIGS in this city who DO NOT care how they dispose of their garbage, let alone COVER their trash cans which by the way is a law, in case someone DOES NOT CARE TO KNOW.

Uncovered trash ATTRACTS raccoons since this is their only food supply when they find themselves in an urban environment, just like it attracts rats and mice.

And WE have chased these animals OUT OF THEIR rural environments and into ours since they have nowhere else to go now. We have destroyed their habitats by urban sprawl and OVERDEVELOPMENT. It is only ethical that we address THIS PROBLEM WE CREATED in an ethical and humane way.

Yadda, yadda. Garbage bags are easy pickings for dogs, raccoons and rats. The tapered design of plastic garbage cans makes them easy to tip over. Raccoons have a high degree of dexterity with their forepaws and can even open jars.

The only animal-proof garbage container is the steel can with a tight-fitting lid... they were once the percussion section of the urban late night symphony and the lids made great shields during neighborhood brawls. Ah, for the good-old days...

The famous rabid raccoon story is an old one, not unlike "Sasquatch" and "The Jersey Devil". I am very lucky enough to have a 'mama coon' and three small 'cubs or kits, visit my backyard twice a week the night before garbage pickup. The idea of trapping and killing these wonderful little family of animals who were here long before New York was here is sick and twisted. When will humans ever get back in touch with their our nature, or our we really destined to becoming just machines.

When will humans ever get back in touch with their our [sic] nature, or our we really destined to becoming just machines.

So, do you live in a teepee or an apartment building?

A yurt or a condominium?

And how much do you REALLY want humans to "get back in touch with nature"?

Do you want us to go back to the hunter-gatherer stage?

Do you realize what that would entail?

What size raccoon hat do you wear again?

Agreed. The problem is the old bats that leave food out for stray cats, because they have nothing better to do while they await death.

Queenscrapper and I don't agree on much but I think on this one we might see eye to eye. Leave the raccoons alone assholes!

Remove glands and as much fat as you can from raccoon. Parboil until done, skimming fat off water as it rises to the top. Remove raccoon and let cool. De-bone meat and hold aside.

Add carrots, potatoes, celery, mixed vegetables and canned tomatoes to the pot. Add meat to pot. Add seasonings. Keep at a low simmer until ready to serve. For a thicker stew, add flour mix with cold water before serving, stir until thickened.

You need use the Worcehest sauce and simmer for 3 hour we make in the woods once before come to New York. it notso good the goose is better
fonso

Move them to the country. Oh thats right NYC and surrounding land has overbuilt the last 40 years so your living on their wild life land. What do you call the East River? Just a place to throw trash.
It's a wild life area in some parts.

Isn't this the blog that said you have the first amendment about speech when you had people say nasty comments to the cat rescue ladies about taking their meds because they said why bother having the article when people are going to not help the situation? Seems like the reptile brain angry usual posts need their meds. Those ladies work for the ASPCA now or in the past. Maybe you have seen them on Animal Planet or the other officers who do needed rescue work to abused dogs and cats.

Besides I and others I have talked to know of many people in Queens and Brooklyn who have had their comments deleted on here when they pointed out republican corruption charges numerous times. Quite the double standard isn't it?
But thats typical of conservative hypocrites and this blog. Oh and no one really thinks Bloomberg is a democrat in NYC with a brain.
You gotta be kidding me with his Fortune 500 corruption around every corner.

If the comment is on topic, I don't mind an opposing viewpoint. If the comment is off-topic and delves into republican corruption, Obama's birth certificate or whatnot, it will be deleted. And the city is not going to be allowed to dump their problems "in the country".

You obviously don't know what's appropriate, probably have lost numerous debates because you can't stay on topic and have never edited a website.

A couple of weeks ago there was a dazed raccoon walking around our sidewalks here. My wife said she saw one the day before by the service road and thought it got hit by a car. She thought this was the same one. This little guy looked in distress and kept trying to find a hiding place and was walking very slow and was lethargic. I called numerous places to find out how to help and couldn't get him help. He must have found some place because he disappeared after that. It was so sad to see a small animal in distress and apparent pain. No person or creature should suffer in pain...

Faster hit a nail on the head. NY has made it too hard for its own volunteer wildlife rehabilitators to help distressed wildlife. The DEC needs some public pressure to extend support to its own wildlife experts instead of hindering them.

While grateful for the intent to not kill all the wildlife, removing them alive or dead will not trick Nature. Others will continue to move in as long as there is food, aka a "mess" to clean up. Trash feeds rodents (hantavirus more risky than a wee chance of rabies to humans), rodents feed raccoons, skunks, etc... Then would come coyotes.

This is an opportunity to expend time and funds to try humane population controls (birth control) - removing or killing won't work in long run. Nature rebounds, and food supply is a larger factor than we are willing to accept responsibility for.

Every time an animal in the chain is removed healthy, well-fed animals will reproduce under the assumption that 'more are needed'.

The over-population of deer in states like NY is no accident. Wildlife management is a seriously broken, corrupted mess. Google "whose wildlife is it anyway", Pace Environmental Review. The DEC gets millions of federal tax $ based on how many hunting licenses they sell, not figuring out humane solutions to public issues with it.

And yes, loss of habitat is factor. What people don't realize is that wildlife is seen more often now in large part because THEY are evolving to accept humans as part of their world now. "Can't beat 'em, join 'em".
We can only hope to become as wise, adaptable and tolerant. The more you take time to learn about wildlife, the more you WILL enjoy it. I promise.