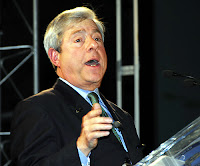 Angry patrons of Borough President Markowitz’s Seaside Concert series in Coney Island were fuming over the city’s noise crackdown at the controversial venue, where a new law kept performer’s voices — and their jams — at a whisper Thursday night.

“It’s like music on mute!” said Louis Perez of Sunset Park, who didn’t have to raise his voice while standing in the middle of Asser Levy Seaside Park. “The performers should start doing sign language!”

For the second week in a row, the volume was turned down because the concerts — which have been held at the venue since 1991 — now must conform to a law that demands the music not exceed 10-decibels above the normal street sound level near two synagogues facing the park.

“This is terrible!” said Lillian Rowlett, who was “listening” with family and friends. “We can’t hear anything, we don’t know what’s going on.”

At times, it seemed that even the performers were having trouble hearing, as they were often wildly off-key.

And several times during the show, when performers asked the audience, “How do you feel Brooklyn?” the crowd replied with resounding boos. At another point, a performer asked, “Can you hear me?” The crowd unanimously replied, “No!”

Markowitz did not hide his irritation with the new rules when addressing the audience.

“We’re under terrible constraint,” Markowitz said. “We didn’t ask for this, it’s being imposed on us. Next year, we’ll get this straightened out one way or another, we’re so sorry.”

The “10-decibel law” was a last-minute measure pushed through the City Council by Mayor Bloomberg in June as a way to keep the concerts going this summer after it was discovered that the shows had, for years, been in violation of a law that prohibited amplified music within 500 feet of a house of worship.

As it turned out, the concerts could not even adhere to the new law.

"One of the points that was left out by this reporter was that this was the FIRST time in the history of Marty giving his summer concerts that he actually LEFT the concert before it was over. He was so pissed off. Other have said he was actually crying about the situation. He doesn't realize that he was at fault & his promoter. It was his buddies (Councilman Recchia & others) that passed the new law & Mayor Bloomberg signed it into law. Marty is a serial violator of the law - violating the old 500 foot rule (for over 19 years) & the new rules. Markowitz still doesn't get it: An 8000 seat amphitheater in a bedroom community just won't work out well." - anonymous
Posted by Queens Crapper at 12:23 AM

aaaawwwww poor Marty having a hissy fit! Deal with it!

Glad to hear things went bad for Marty Moose and his summer concert.

I have no sympathy for Borough President Marty Markowitz. He wanted the new law with the backing of Mayor Bloomberg.
At the Council hearing Mr. Markowitz was all for the new law.
Mr. Markowitz as the reported in this piece has violated the old law & the new law. Mr. Markowitz doesn't give a s**t about anything else but his own ego.
He has what the ancient Greeks called HUBRIS.
He also thumb his nose at the Courts stipulations with regard to the Summer Concerts.
After the Sound pepole tried to comply with the decibel levels & the crowd told the Promoter that they could not be heard & Marty went on stage to give his argument as to why the sound levels has to be that way , Mr. Markowitz & the Promoter basically said F**k it & then proceeded to blast the music anyway.
A real slap in the face to a law that Mr. Markowitz, Councilman Recchia & colleagues in the City Council, and Mayor Bloomberg wanted.
Well Mr. markowitz it's about time you got with the Program :
Don't build your Amphitheater Monument to Yourself in Asser Levy/ Seaside Park.
It just doesn't fit in a Bedroom Community. There is plenty of venues in Brooklyn other than Brighton Beach where it will fit in great !

Its real hard to pick a side here.

The beauty here is that the law he rushed to have passed blew up in his face. Big time backfire. I love it.

Sorry Pal : This has nothing to do with Jews. Let's not go there. You sound like you're an Anti-semite.

It all has to do with the Politicians though. They make & pass laws & when it dosen't fit into their agenda they want to back off & even don't follow their own convictions & abuse their powers. What else is new ?

who are the dumb asses that built this venue near those religious establishments. what idiots.

What is exactly a "normal street sound level near two synagogues facing the park"
1-When a rush hours bus passes.
2- Four o'clock in the morning ?
3-What meter weighting (A,B or C)?
4- What Frequency?
5 -Polar pattern (uni, omni, coridide, figure 8, paribolic aim of the sound measuement device.
6-Airplane plane out of JFK or passing helicopter, ambulence, fire truck. (all louder then any band)

The city's experts totally f_ed this mandate up ! Its totally devoid of Spec.
"normal street sound" means nothing !

I think the 19 year old law not allowing amplified music within 500 feet of houses of worship is what is stupid.

We got along perfectly well for 400 years without that law.

In this case it's being misused anyway, grouchy old people who live nearby are using it as a weapon to stop the concerts at times when synagogue services aren't even scheduled.