Astoria Park is full of trash 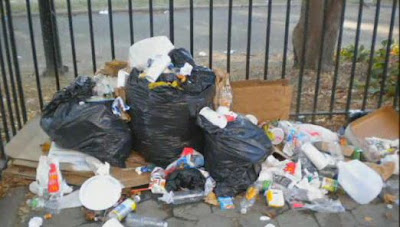 “Every year, once the pool opens, the trash gets out of control, and it’s been going on for years and years,” said resident Debbie Riga. “There are not enough garbage cans in the park to accommodate the number of people who come.”

For years, Riga repeatedly asked the city to place trash barrels along 19th Street between 24th Road and 23rd Avenue.

Frustrated by the response, Riga decided to take matters into her own hands – at her own expense and time.

“We really don’t care what agency it comes from, we just want a clean neighborhood,” she said. “I just started putting garbage bags up this year, and you can see the difference. It’s much cleaner. It’s not rocket science, people use the bags if they’re there.

NY1 reached out to the Department of Parks and Recreation, which released the following statement:

“The Astoria Park Pool is extremely popular and has had almost 110,000 visitors since the pools opened at the end of June. The Parks Department sends crews to pick up the trash in the mornings and afternoons. More trash barrels will be added this week.”

Isn't it sad that you have to call a TV station in order to get even simple things done in this town?
Posted by Queens Crapper at 12:15 AM

This is a very busy and well attended Park with visitors traditionally bringing huge amounts of food and doing BBQ there. Of course there is the normal soda and water bottles etc trash. There have never been enough trash cans or perhaps too little frequent trash pickups in the park. It's certainly a Parks Dept issue for they are truly incompetent (lazy) and do a poor job at this park.

Expecting nothing from their elected officals +

expecting nothing from their community board +

accepting anything that is told to them +

never seriously questioning anyone in authority +

reelecting the same bright lights over and over again +

(unless of course, you are a developer or absentee landlord)

astoria is full of trash too

How about all the unleashed dogs and the owners that don't pick up after them. You don't know where to step. The grass is not a place to picnic anymore. Astoria Park was my favorite place to bring my books and study by the water. But between the adults playing frisbie or ball and not caring who they hit and all the lose dogs and crap I now go to Starbucks.

There have never been enough trash cans or perhaps too little frequent trash pickups in the park. It's certainly a Parks Dept issue for they are truly incompetent (lazy) and do a poor job at this park.
----------------------------------
I wholehartedly agree, but I also believe that people should leave the park cleaner than they left it, taking all their trash with them.

I wholehartedly agree, but I also believe that people should leave the park cleaner than they left it, taking all their trash with them.


Yea, but since your local talent wants to get elected despite the poor job they are doing (after making everyone else either apathetic or move away) you now have a Sanctuary City where the locals do not know customs or Yuppieville where the hipsters are taught the the locals are named Edith and Archie.

You can never get shit done in any city unless you call a local tv station.

There have been NO BARBEQUE signs all over Astoria Park and Rainey Park for the last 40 years or so but every Summer, hoards of people have been BBQ'ing right next to the signs with open flames inches away from tree branches as cops drive right pass. They must be politically correct you know, can't perturb the illegals now.

I remember about 10 years ago, stopping a cop car and PLEADING with them to say something when I thought a tree was about to go up in flames and all they did was drive by the crowd and keep on going.

You have to wonder what's wrong with a Mayor and a Police Commissioner that sets official police policies that intentionally IGNORE laws in order to keep themselves in office by kissing some serious ass for votes.

You have to wonder what's wrong with a Mayor and a Police Commissioner that sets official police policies that intentionally IGNORE laws in order to keep themselves in office by kissing some serious ass for votes.

All politics are local. Start with your community board, letters to the editor in your local paper, and calling your city councilman, then work your way up.

If they don't give a shit, why should the mayor?