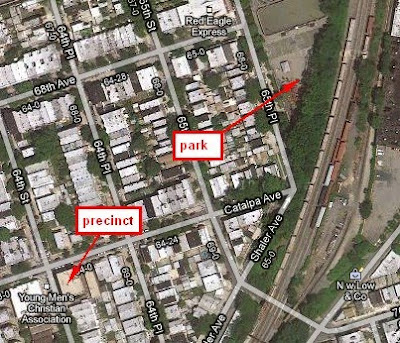 A youth football league that was booted to a Maspeth Glendale-Ridgewood field last year after playing in Juniper Valley Park for more than two decades said its new turf is plagued by gangs.

The longtime coach of the Queens Falcons - who now play ball in Mafera Park after the city took the team's cleats off the grassy Middle Village field - said the dark lot is a magnet for quality-of-life crimes and makes the area unsafe for the young athletes.

"It's just a matter of time before something bad happens," said Tim Cavanaugh, 46, who has coached the team for almost 20 years. "At the end of the day, we just want our kids safe."

Since it began playing on Mafera's artificial turf last year, the team has witnessed trouble just past its sidelines, including fights, kids "throwing" gang hand signs and graffiti that seems to mark gang turf.

The Parks Department recently painted over the letters "TGWK" - which sources said stand for Together We Kill, one gang in the area - that were spray-painted on the team's storage unit on the field, Cavanaugh said.

Cuts in police staffing have made it harder to patrol the field area regularly, but officers from the 104th Precinct are always quick to respond if a call is made, Cavanaugh said.

Well they should be considering the precinct is only 3 blocks away...
Posted by Queens Crapper at 1:09 AM

I bet the precinct officers make it over there promptly in 45 minutes or are just too busy to stop by to monitor the gangs.

It isn't Bloomberg, although he did not help the situation by cutting 6,000 cops. The fact is that if you walk into any park late at night you will probably be jumped, robbed, see people doing drugs/drinking. Blame the cops for not doing their jobs and checking out parks at night as part of their patrol. Bloomberg could add an additional 20,000 cops and you would still have this problem in parks. It's just the nature of the beast.

I guess they should just go play somewhere else as you suggested here: http://queenscrap.blogspot.com/2010/08/ridgewood-playground-is-dump.html

Let me get it straight: It's ok for mothers with kids to be forced to go elsewhere, but when organized sports are involved it's the NYPD's fault for not doing enough. Got it. Hypocrite, much, Crappy?

The 104PCT could find a collar in a shirt factory.

Take control of our parks which have been over-taken by drunken day laborers urinating everywhere, gangs threatening everyone with violence and shaking down the illegals and illegals setting up their living rooms cooking up a storm to sell food to the troops of illegals playing soccer that tear up the turf. The Parks Dept does not clean up nor even visible ??

Actually, mothers CAN take their kids anywhere to play. Organized sports require permits, which is why this team is forced to play at Mafera. And they play at night when the sun is going down, while mothers take their kids to the park during the day. Also the women were complaining mostly about cleanliness, which is not a police matter. Gangs are. A homeless guy sleeping in the park is disgusting and annoying, but generally not dangerous. Gangs might jump you and slit your throat.

Where's Paul Kersey when you need him?

For years, just three blocks away, the 104 OUTRIGHT REFUSED to believe anyone that told them of Albanian gang activity in that park.

I don't know who tags with 'TGWK' but i would look at the Albanians, first.

only gonna get worse- leave now if you can...

"the team has witnessed trouble just past its sidelines, including fights, kids "throwing" gang hand signs and graffiti that seems to mark gang turf"

Ha, please. When .357s and .45s start going off then there should be some concern. Safe suburban Glendale scared of a few brown people and there retarded fake gangs.

Go to Crotona Park East on a late Saturday night and then tell me about dangerous.


Go to Crotona Park East on a late Saturday night and then tell me about dangerous.

Lol the entire Bronx is a shit hole, not just that park.

The Anon before me said it right!

TWGK=Together we kill, hmmm I guess they can't do anything on their own, a bunch of wanna bees, when they all get locked up (just a matter of time) they will be known as "together we get fucked in prison."

Yeah, drunk and sleeping day laborers are a problem in parks no doubt. All I see the cops do is wake them up and tell them to leave, but we all know they eventually come back....

Many illegal immigrants are also gang members, whether they are Hispanic or Guyanese. And they are all criminals.

Actually Glendale is starting to become alot like Ridgewood/Bushwick. While all the Hispanic and Black people are being kicked out of Brooklyn due to the yuppies, all the surrounding Queens neighborhoods get stuck with the mess that used to happen only in Brooklyn. Not trying to discriminate against anyone because im hispanic myself, but the type of hispanics that are moving into these areas is the problem. Sure you got alot of decent hard-working people but then you got your knuckleheads out there that only want to cause problems and prove an ignorant point that they're hard. Meanwhile all that "gangsta life" really is just for morons who couldn't make it the hard-working decent way so they try to find the easy way out. Especially by 68 park. 68 park is tagged all over the place with "Patria Killa" 3ni all day and the Bloods and the Trinitarios meet up there all the time. So the person who said suburban glendale scared of a few brown people; You should take a walk by cooper and 60th ave or 60th st. and Cooper and youd be shocked at how little to none white people you see over there. Not all of Glendale is bad there are some really nice parts just like Ridgewood but its not exactly a utopia or suburbia either.

All the funding in the world wont solve the corruption & laziness of the 104th. This has been going on for decades. Gun violence happens frequently within a 10 block radius of the precinct, and they DO NOTHING.

They stonewall residents, drive around like ASSHOLES in their squad cars for fun, and make it quite clear to concerned residents that they will not do their job.

This has nothing to do with Bloomberg or any other mayor. These guys are either the dumbest, or the most corrupt (or both) cops on earth and nobody has done a thing about it in decades.