Woodside trees to be replanted 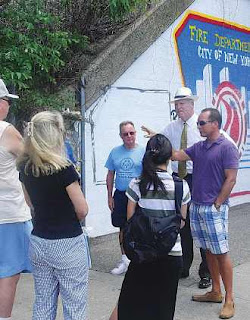 After tearing down trees along tracks in Woodside this spring, Amtrak announced last Thursday, a $460,000 plan to plant new trees and shrubs and install fencing in the area.

Amtrak has hired a landscape horticulturist to assist in the selection and planting of approximately 600 new trees and shrubs, which the railroad will guarantee and maintain for one year.According to the company, the trees selected will be shorter than the ones removed to prevent damage to the tracks.

In addition to planting trees, Amtrak will reportedly install 1,250 feet of standard fencing and 100 feet of ornamental fencing to prevent access to the tracks. The agency reported it would also remove debris along the tracks. According to Amtrak, some of this work is already underway and the entire project is expected to be completed in October.

Of the company, Assemblyman Mike Gianaris (D-Astoria) said “it sounds like they are at least doing the right thing finally, but I’ll believe it when I see it.”

“They spent money to take the trees down and now they are spending money to put the trees up. That tells you a lot about Amtrak’s efficiency,” Gianaris said.

Amtrak had previously performed maintenance work in the area by removing trees and other vegetation to eliminate the possibility of branches falling into its overhead wire and signal system or onto the adjoining tracks. If a tree or branch were to fall, the agency said it could disrupt train service for thousands of daily passengers.

“This action proves the importance of community involvement, said Councilman Peter Vallone, Jr. (D-Astoria) in a statement. “Our citizens stood up after trees were chopped down in their neighborhood and Amtrak listened. I will continue to work with Amtrak and the residents of Woodside for the duration of the landscaping revitalization plan and any other issues.”

Still, questions remain as to whether Amtrak, which used stimulus funding to pay for the tree removal, may have acted erroneously and wasted taxpayer money.

I'm so happy I got to use that photo one more time!
Posted by Queens Crapper at 12:00 AM

Maybe if they just PRUNED the trees, they wouldn't have to spend money to REPLANT them.

Ya gotta love it.