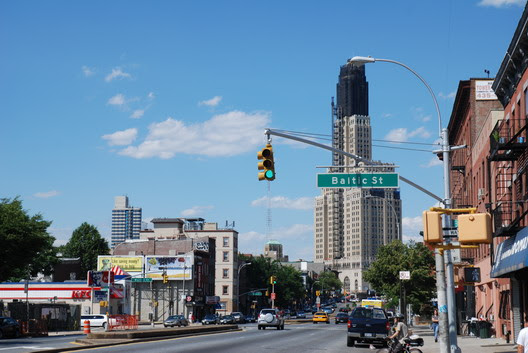 CITY HALL. Eminent domain was the topic du jour Thursday, as protests here over the Atlantic Yards and Columbia expansion projects were quickly followed by a hearing on the city’s Willets Point redevelopment plan.

Queens Councilman Tony Avella believes eminent domain abuse will be a big issue in the 2009 election.

“We’re talking about three neighborhoods in three different boroughs,” said Avella, one of only two declared candidates for mayor (the other is U.S. Rep. Anthony Weiner).

“It’s a fundamental American right to your own piece of property and your own business,” he said. “How can the city say, ‘We need your property, not for a school or a highway but for some rich guy so he can build a project to make more money’? It’s horrendous, and the risk is becoming more evident. If it happened to them, it can happen to you.”

Posted by Queens Crapper at 6:42 AM

"Queens Councilman Tony Avella believes eminent domain abuse will be a big issue in the 2009 election."

Mr. Avella is right and positioning himself to be the strongest candidate with the most capability behind the real issues that dog private property owners.

I happened to be on the BQE driving past the area of where the Atlantic yards is to be built - are they kidding us or what? With long stretches of the BQE resembling Iraq roads - where or how will this infrastructure support that project at completion? Why are properties being stolen,given to these individuals for monster projects no one locally wants? There are tons of big existing derlict properties I drove past that can be redeveloped. Why destroy whole neigborhoods? These are give aways stolen from existing residents and property owners.

It really should be called
EMINENT DOMINATION.....
and that's plain old fashioned tyranny !

It's one thing for some rich SOBs
to steal from the public cookie jar.

That's criminal and grounds for a second
American revolution!

It's another to STEAL land from private owners
NOT FOR THE PUBLIC GOOD
but to further the wealth of some already
VERY FAT rich cats !

This land grab resembles that scene from
"The Godfather" movie when Don Corleone
sends his enforcer Lucca Brazzi
to the negotiating table.....
where he delivers his famous ultimatum.

"Either your brains or your signature
will be on the contract" !

We have nothing less than a bunch of
political mobsters running our city.....
begining with "Il cappo di tutti cappi"....
our mayor.... all the way down the line!

Good day Crappy,
This would be a good time to relink the video made by the Willets Point businesses. It really hits the nail on the head. Thanks!
Alan

Thank you! Crappy listens. Please watch it. You will not be sorry.

The use of eminent domain to take private land on behalf of private developers is wrong. I blame the Supreme Court for this. They knew these abuses would happen.

Bloomberg wants to leave behind a legacy. He is all right. He's worse than Robert Moses.

Hey, I have an idea. Let's get around landmarking by using eminent domain. This way, we can build new power plants on the Upper East Side to feed the electricity that will be needed into Queens, since we are absorbing the most of the "1 million more by 2030".

Julie, I like your way of thinking. How about a sewage plant in the middle of Greenwich Village?

Once again I urge readers to GOOGLE Zimbabwe and Robert Mugabe to understand the full use of Eminent Domain in the hands of a determined crook.

Do you trust Bloomberg or Gallagher to protect your property and your rights to own it and use it as you see fit?

Do you believe that it is your decision alone to purchase a home in a neighborhood and to pass that home on you your children and grandchildren ... without fear that a politician will interfere with your decision so he/she can make money in partnership with a developer who is happy to destroy your dreams?

Do you believe that a politician or developer knows better than you on where and how you should live?