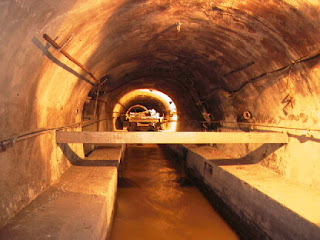 The four- pronged flooding fix-it plan outlined by the DEP calls for:

Renovation of Calamus Ave. and 69th St: The city will expand and renovate the pipes, which are inefficient and cause bottle-necking, which was discovered after the floods. Slated completion: 2011. Estimated cost: $8million to $10 million for renovation.

Please don't tell me that's a medical photo of
Dennis Gallagher's butt
after Bubba gets finished with him in jail !

Flooding has been a problem in Queens since early times. No compreshensive plan was ever put into place to take care of it. Maybe thats needed.

Why is it the only time they city makes 'improvements' on sewers, its in communities slated for development?

Western Queens for years had streets torn up in Hunters Point and Dutch Kills for new sewers, not for the people living there, but for the planned new development.

Come to think of it, if the city spent the taxpayer's money on central Queens instead, your problems would have been solved years ago.

You, know, I never thought of that. How about a local pol in central Queens where there was flooding, or a newspaper reporter, take a look at where the city spent its sewer funds in the past 10 years.

If its to finance development on the waterfront, while the rest of the boro gets hollowed out, then someone should raise hell about it.

This is exactly what happened in Astoria last year with the brown out. Con Ed was told to invest heavily in the new development, while the community board all but encourged illegal conversions that totally overwhelmed a power grid that was getting long on tooth and designed for a fraction of the load.