“We need to let people know we’re open for business. It’s safe to come here. Join this amazing moment. Come to this city that’s been so heroic during this crisis,” de Blasio said during a City Hall press briefing.

The campaign aims to boost Gotham’s hotel, restaurant, arts, entertainment and taxi industries and bring back the 400,000 jobs that were connected to tourism pre-pandemic.

It’s the “largest campaign ever to promote tourism in New York City and it will remind people this is the place to be,” de Blasio said. “There is no place like it in the world.”

The campaign is being funded through federal stimulus money, according to City Hall. Typically, the city spends around $3 million annually in tourism advertising.

“We are absolutely certain,” the mayor said.

Fred Dixon, president and CEO of the city’s tourism bureau NYC & Company, explained during the briefing that the “major comprehensive marketing and advertising campaign” will kick off in June with the message that “all five boroughs are open, vibrant and ready to safely welcome back visitors and business events.”

There should be no more fucking doubts about who Mayor Big Slow de Blasio prefers to serve, besides himself and his running gag political career. This dumbass decided to devote 30 million dollars from President Biden’s stimulus recovery bill for an ad campaign begging tourists to come back to New York City. Showing once again that he is more concerned for the leisure of visitors than for services for his constituents who still go wanting.

Although this ludicrous boondoggle city p.r. campaign is supposed to start in June, it’s clear that this money was already wasted before the Blaz announced it in the most surreal daily briefing he has done so far during the still existing pandemic for a video produced by the city’s office of tourism, NYC And Company (a city government bureaucratic agency that really has absolutely no use for the residents of the five boroughs).

This 30 million could be used for the basics of city services. Increasing transit service by hiring more drivers, fixing storm drains and catch basins, restore funds to the sanitation dept and adding more hours for corner trash pickups and all fixing all the fucking potholes and cracks on the streets, avenues and boulevards.

But the most interesting and overlooked thing this 30 million could be used for, especially how often de Blasio speaks about equity, is to implement a Universal Basic Income stimulus for the poorest citizens of NYC until the merciful end of his final term as mayor. Doing this would also put a crimp into Andrew Yang’s own campaign for mayor, since it’s the most recognizable policy of his platform. 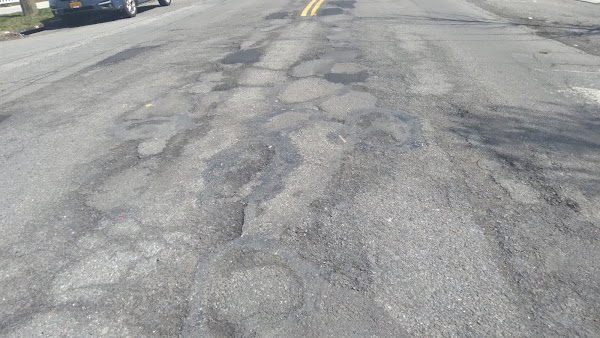 Little early for that, eh?

Or is he afraid that the Red States will get the tourists. Tidy, low crime, no trash - human and garbage - etc etc etc.

Well, guess where someone on vacation will go for a nice meal and a good time without some crazies showing up and sneering at them for having white skin.

Once new patterns are established it's going to be hard to go back to before BLM - Covid.

Why would any normal human being in their right mind want to come here? Until Debozo and the rest of the politicians decide to clean up all the crazy homeless people and the crime wave over taking this city. A prime example was that tourist that got shot in the shoulder about 2 weeks ago by Penn station.

I would advise every potential tourist to stay away from this shithole city until the politicians take some sort of action. Unless you don't mind becoming a crime statistic. Take it from a guy from Queens who avoids the city at all cost.

You can put 10000 cops on the streets of midtown and if you don't give them the tools and backing to do their jobs nothing will change. You might as well put 10000 cardboard cut outs of cops and you will get the same results. Any cop that decides to take any type of enforcement action should have his head examined. The mayor and every politician will be screaming for your head when one situation goes bad.

This Debozo is truly delusional along with his moron Police commisioner.

That's right, tourists. Enjoy you outdoor dining while also enjoying your free street theater - Lefties and BLM screaming their spittle at your repast. You might even get slugged in the face by a mental defective.

Universal Basic Income stimulus is a terrible Idea !
It will drive more middle class tax paying working families out of the city.
How many more freebies do you want me to pay for ?

I love it, NYC is now a big rotten container of Marxist sour milk !

Who cares said...
Thank you Libs for sacrificing and Living in NYC.
Thank you for taking one for the Demorat team.

Saying that the lunatics are running the asylum is an understatement in reference to the US.

That exactly why Trump didn't want to hand the cash to this knucklehead, Trump wanted it for police and infrastructure repairs for those who work & live here.
Now it will be used to subsidize hotel prices, air fares and advertising for yahoos and overseas idiots looking for jolly's.
Good for some Manhattan Hotels & Restaurants serving $12 buckwheat juice, absoluty NOTHING for what this $$ was intended for including funding the strapped NYPD and Fire houses.
This jackass gotta go, I hope Curtis Sliwa wins

Who would book a trip here, spend thousands of dollars knowing that the whole city can be shut down at the drop of a hat by our elected morons?

All you angry malcontents posting....do you live in NYC?
If you do and hate it..,,,MOVE! Why are you still living here. Hypocrites 🤮

What’s the age group that follows this blog? A bunch of grannies and grandpas?😂

Quote: "A bunch of grannies and grandpas?😂"

You young shit for brains cant wait till we die cant you?
Well you will have to get on line and wait.
And if you think you will be inheriting our homes, IRAs and bank accounts guess again. Socialism is going to take whatever us grannies and grandpas don't finish spending and plant you in the box.

Hmmm, I think I will buy a 75 Corvette next week.
Enjoy you dream of cancelled rent and free stuff because all the promises from your socialist democrats will be just that. --just a dream

"A bunch of grannies and grandpas?"
I have neck ties older than you kid !

To the last Anonymous knucklehead: Youth and inexperience are NEVER substitutes for the older and wiser city residents, all of whom have more heft and money, not to mention common sense, logic and wisdom. In fact, the majority of those 'grannies and grandpa's' have already bolted from this padded cell of a broken down shithole. Enjoy your illusiory freedom and democracy, city shit kicker!

"Illusiory freedom" The young people today give their freedom away !

"Young shit for brains" were created by lazy parents !
They let the UFT brainwash the kids then sat them in front of the idiot box.

Lone it! This is better than Fox News.
A last stronghold for magamaniacs😂😂😂.
Godhead Donny Drumpf is gone. Wake up to 2021!

Glad I don’t live next door to some of these IGNORANT posters,
But I am amused by their comedic diversion from COVID confinement ....now that the theatres are still closed.

Now, STOP me if you've heard this before, but wasn't NYC & Company run by Gargoyle Giuliani's skank/whore/mattress back, Christyne Lategano? You know, the one who was spending more time with that neo-liberal walking corpse/trash bin than there were hours in the day? I don't care how much stolen taxpayer-funded funds are diverted from the screwed city residency when this town is more toxic than nuclear proliferation - and, a hundred trillion times more lethal. Even the homeless have found more aggreable terrain! Who ever said that being a whore to City Hall doesn't pay handsomely?

But, I love the exchange from author, Fran Leibowitz that occurred approximately three years ago when she approached some nameless tourists from who knows where on the streets of the open mall that has now tonsured 42nd Street and Times Square (complements of Bloomberg stooge Janette Sadik-Khan):

FRAN: So, do you like this outdoor public mall in the middle of Times Square?

FRAN: So glad that you like it - we BUILT it for YOU!

"Glad I don’t live next door to some of these IGNORANT posters"
Who wants renters like you next door.
Now go color with your gender neutral crayons, loser!

Alte kackker Fran Leibowitz is an untalented overrated "writer". I can't think of anything of import she's ever penned. E.g.the scenario above. This has import?7

Anonymous said...
This comment has been removed by a blog administrator.
Saturday, April 24, 2021

To georgetheatheist: Leibowitz, for the past 40 years, has always been a party lurker from New Jersey. I completely agree that she has ridden the coattails of whomever is desperate enough to glance in her fading direction (recently, it's been Martin Scorcese who collaborated with her on a Netflix documentary about New York that I found to be dull and reductive). However, her commentary to the tourist in Times Square compensated her for at least a chaste amount of street cred - if nothing else.

Leibowitz was caught smoking in a theater in the Hamptons years ago. The customers complained and management forced her to stop. She wrote about this incident making a big deal about her loss of privileged entitlement. Then she had a tryout slot later as a talk jock on a NYC radio station for an hour slot. I was the 2nd or 3rd caller on this first day. I brought this incident up for the listeners calling her out on air why she was so rude to the theater patrons. She hemmed and hawed and gulped some kind of lame response to my blind-siding and never recover her composure. She limped embarrased through the rest of the show. A Talk Radio disaster. Management needless to say never hired her.