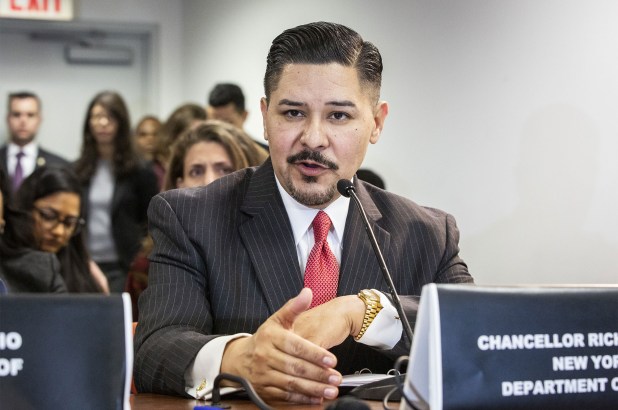 The California ed-tech firm that hired ex-schools Chancellor Richard Carranza cashed in on the COVID-19 pandemic in NYC, reaping millions of dollars from the Department of Education under his reign, records show.

IXL Learning, Inc. — which named Carranza its chief of strategy and global development — has been paid $3.3 million by the DOE in the past two years alone.

The Silicon Valley outfit has collected $2.1 million in NYC taxpayer funds this school year. That nearly doubled the $1.2 million it made last school year as the DOE expanded remote instruction, according to records compiled by the city comptroller’s office.

Observers expect IXL’s windfall to grow with Carranza as its salesman.

He “brings to the table a wealth of contacts and people who owe him favors” in New York, Houston and San Francisco, where he has led school districts, said Alina Adams, a Manhattan mom and writer who runs the website “NYC School Secrets: Parents Helping Parents.”

“Some of the people in charge of deciding whether or not to buy IXL products will be the same people that Carranza hired.”

Under NYC laws, city employees may not seek jobs — including submit a resume, discuss opportunities, or interview — with a company they are dealing with as part of their city job, the Conflicts of Interest Board (COIB) states.

Carranza announced his resignation on Feb. 26, saying he needed time to grieve 11 loved ones lost to COVID-19.  IXL announced his hiring in a press release dated April 1, less than three weeks after his last day as chancellor.

Who the heck owes him favors? He didn't do us no favors. He didn't help the students, the teachers, or the parents, so who does that leave?

“Some of the people in charge of deciding whether or not to buy IXL products will be the same people that Carranza hired.”

Ah, naturally. The next mayor is going to have to do a top to bottom purge of all the people Carranza hired, before they destroy the department from within.

So, what's surprising about another "Public Servant' Schill?

Getting hired solely based on your race should be illegal, period. This man obviously was as incompetent as that other idiot that they bought over to fix the mta. Pay them so much money just to fail....a turtle can do the job better than these 2 idiots did.

Getting hired solely on your race is illegal, per the 14th Amendment. It's just that no one in NYC has the smarts to challenge it up to the Supreme Court. It's reverse discrimination. But discrimination all the same. Look it up!

"Look it up!" The Sheeple are way too lazy ! The Marxist are winning the Info War.

CNN was Exposed with one of their Tech Directors captured on tape admitting they are using “propaganda” to take down Matt Gaetz.
Patriot, Project Veritas released a video featuring CNN Technical Director Charlie Chester talking about all the ways his network planned to remove President Trump from office and damage Matt Gaetz because “he’s a problem for the Democratic Party…”