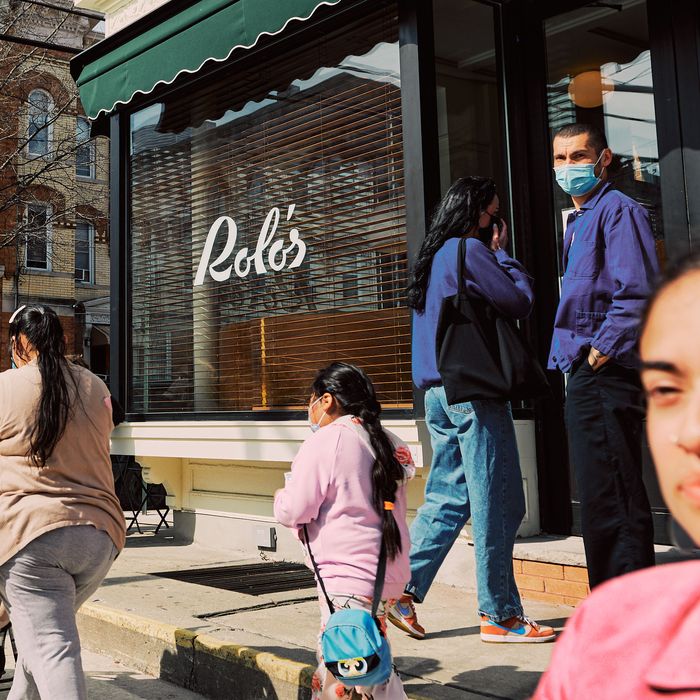 Luisa’s family has lived in the same apartment building on Onderdonk Avenue in Ridgewood since she was 10 years old. Now, she worries that time will come to an end. Last year, when Luisa (who asked to only use her first name) found herself working out of the apartment, she started to notice how quickly changes in the neighborhood were happening. Local property values had skyrocketed, and she says her landlord has said, many times, she’s thinking about selling. “If she were to put it up for sale, we would be evicted in a matter of just closing your eyes,” Luisa fears. “We don’t have a lease,” she says, “so there are very real concerns that I do have.”

While she says there’s no immediate threat to her family, she’s worried that may change any day now. She spent the summer listening to the drilling and construction along Onderdonk Avenue, including for Rolo’s, a new restaurant from a trio of former Manhattan chefs. “It was just this nightmare for me,” Luisa says, “because I knew what was happening.”

Rolo’s is the kind of low-fuss, New American place you might expect from four veterans of Danny Meyer’s Gramercy Tavern who wanted to open a casual, outer-borough dining room. Rolo’s sells eight kinds of pickles, pineapple-rum Negronis, homemade focaccia, fresh pasta, and containers filled with slow-braised lamb ragù. A recent review in The New Yorker said it offered “a taste of New York.” Howard Kalachnikoff, one of the chef-partners, calls it, “Just a simple, neighborhood restaurant, focused on cooking over a wood-burning grill.” The goal of opening, he explains, is “to put down some roots and then see what happens after that.”

Pandemic dining restrictions meant Rolo’s opened first as a market with only takeout and delivery. A few weeks ago, the owners put out some tables, and they have a warm-weather streetery structure in the works (hmm, a sign NYC open streets are being weaponized for privatization?-JQ LLC). Eventually, Kalachnikoff imagines diners dropping in a couple of times each week, and he wants to stay in business for a long time. Ben Howell, another partner, adds, “nothing would make us happier than if some of the young adults that come here now come in in 15 years with their kids, when their kids are graduating.”

Due to the pandemic, Rolo’s opened in January as a grocery store, selling everything from single-origin spices to De Cecco pasta, and takeout business.

Indeed, some neighbors don’t see any drawback to the arrival of Rolo’s or the building’s renovation﻿. “I’m not aware of any negatives,” says Paul Kerzner, a 49-year member of Community Board 5. “I walked into that building about a month ago when that was finished,” he recalls. “I was tickled to death when I saw that the graffiti was coming down and the boards that were up were coming down, and we’re going to get glass back again.”

But for others, Rolo’s is something more than a destination for a quiet weeknight meal. “I’m so excited because I like this kind of food,” says Laura Duarte, who, with her siblings, opened her own restaurant, Las Chilangas, just before the pandemic hit. “But the way we think about this type of restaurant opening … I know the rent is going to increase so much.”

Bike Lanes and community gardens are red flags that gentrification is happening. Who uses these?

but as for DeCecce macaroni? that's a stretch. You can buy that with food stamps at any Bravo supermarket

There's no open street here. It's on Onderdonk. Not going to happen. They are building a dining shed.

We had one of these self titled poor starving "artists" next door, the bullshit and crying poverty never ends with them. And they will never work a real job.
If miss Louisa wants to sit home making finger-paint, cant afford rent, don't like capitalism, don't like noise, don't like immigration laws, don't like landlords why doesn't she go back to Guatemala. How about sue the liberal arts school that lied to her with a useless degree in some art nobody will pay her one cent for.
Hey, she made her own bed, lifetime of welfare and no landlord or taxpayer should pay for it.

You can blame gentrification on local politicians which are elected by the local community.

Unless that changes it's here to stay.

And looking at the local voter base it's here to stay.

JQ, I don't doubt that DOT is that stupid. But closing Onderdonk in that section would be a major mistake. They tried it further west and people just moved the barriers because it was pointless and causing traffic jams. And that's back when there was no traffic at the height of the pandemic. The dopey bike lobby pouted about it but nothing more was said or done.

...You can blame gentrification on local politicians which are elected by the local community...

Yep! Antonio Reynoso represents this district but the Gentrifiers Against Gentrification (aka G.A.G.) like the R.T.U. whining in this article consider him untouchable simply because he's brown. The tower building they despise so much near the train is in his district and he did nothing to stop it although he's been council member for many years and could have pre-emptively rezoned the area to prevent it. Instead the S.J.W's expend an awful lot of energy authoring hit pieces and generally being obsessed with defeating Bob Holden who pushed to get thousands of buildings contextually zoned throughout his district and supports landmarking, both of which prevent luxury towers. He's an old white guy so it's their obligation to hate him. They actually are lobbying to get NYCHA projects in Ridgewood when those stopped being built decades ago and apparently they missed the news that NYCHA's been mismanaged into oblivion and most buildings have major issues. Yes, it's a new restaurant and investors who renovate dilapidated buildings that are the problem. Watching the snowflakes melt over this is absolutely hilarious. Maybe their time would be better spent showing up at the homes of the Hasid slumlords that have pervaded but we know why that would never happen.

Ya gotta be kidding said...

I just read the story at the link provided and find it interesting that Katy Knight, concerned about gentrification because of a restaurant, is on the board of RPA. I mean, seriously, is this a joke?

‘We need more investment in our neighborhoods’

The restaurant isn't "expensive." Might want to check out their menu.

If miss Louisa wants to sit home making finger-paint, cant afford rent, don't like capitalism, don't like noise, don't like immigration laws, don't like landlords why doesn't she go back to Guatemala. How about sue the liberal arts school that lied to her with a useless degree in some art nobody will pay her one cent for.

The article implies she's working at home because of COVID, how did you jump to this conclusion?

Imagine having lived in Ridgewood since you were 10 years old and just noticing the changes and property values because a buzzworthy restaurant opened? I mean were you really *living* in Ridgewood this whole time or just sleeping there?

"how did you jump to this conclusion"
--------
I know the landlord, who is elderly and getting killed with commercial property taxes --and people not paying rent
That's a multi use zoned building, because of that taxes alone are over $30k a year.
Why are landlords systemically always treated like Saten ?

@ Ned said..."Why are landlords systemically always treated like Saten ?"
Jealousy Ned. Eveyone has the same opputunity but some have closed minds and like the government teat. Sucking off the Government Teat is the new normal! Politicians and their friends get the gold mine and the taxpayers get the shaft. Elect real conservatives that care about you and freedom including 2A !