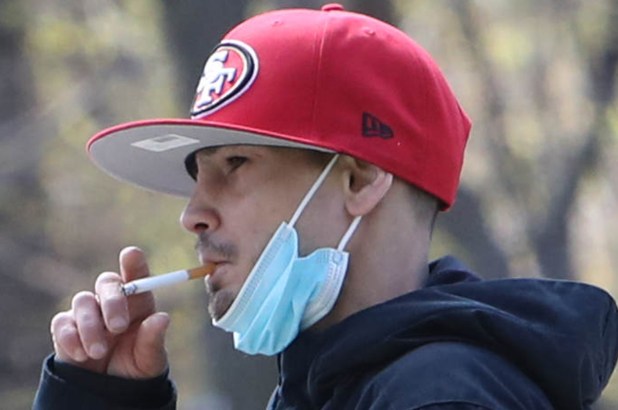 The man charged with trying to shove an Asian undercover cop onto Queens subway tracks was cut loose without bail Sunday — as the judge claimed, “My hands are tied.”

Suspect Ricardo Hernandez, 32 — who faces three hate-crime charges in the attack on the unnamed cop on a Long Island City train platform around 5:30 p.m. Saturday — has at least 12 prior arrests under his belt.

At Hernandez’s arraignment over the attempted push onto the tracks, Queens Supreme Court Justice Louis Nock said the state’s bail-reform measures barred him from holding Hernandez in jail.

“My hands are tied because under the new bail rules, I have absolutely no authority or power to set bail on this defendant for this alleged offense,” the judge said.

Under the new measures passed last year, attacks that cause no injury are exempt from bail in New York.

The judge also agreed with Hernandez’s lawyer to dismiss a warrant against the suspect involving a previous open-container summons. The suspect had had a can of Coors Light beer.

A police source said Hernandez was previously arrested for possession of a controlled substance in 2019 and turnstile jumping in 2016 and 2017 and has nine other sealed arrests on his record.

Meanwhile, his alleged cop assault came after another previous attack this month on an Asian undercover officer — in which the suspect also was almost immediately freed.

Hernandez, who lives near the subway station where the latest attempted shove took place, told The Post as he left court, “I don’t want to talk about this.”

According to police, Hernandez confronted the undercover cop on the N train platform at 31st Street and 39th Avenue in Dutch Kills and tried to shove him onto the tracks.

“That’s why you people are getting beat up,” Hernandez allegedly snarled. "I got nothing to lose."

“I will f–k you up!” Hernandez added, according to cops. “This is my house.”

The bail reform law is not progressive. And de Blasio's and Shea's plan to catch Asian hate crime in the act is a disaster.

Asians need to have "The Talk" about who the real haters are and it's not White People.

Thanks JQ ! This has to be heard, bail reform is a disaster in NY !

Shining the light of truth on the cockroachs in the corrupt treasonous corporate media .

Gonna be a fun summer. This is the NY you all voted for. Enjoy.

Following the orders by a police officer will save your life.

"Following the orders by a police officer will save your life."

Plus you can always sue afterwards and retire a multi-millionaire - like Abner Louima. You schmuck, George Floyd. Can always hire the oily Sanford Rubenstein.

Sad part is that bail reform only happened because state senate seats in the suburbs flipped in 2018. And now most suburbanites don't even need to go into the city now because of COVID-19. What an analogy of elites voting for laws that allow them to virtue signal but not suffer the actual consequences of the laws.

Assaulted a police officer, but not charged with Assault 2 why?

This is not really a crisis when it is being orchestrated. They plowed, seeded, and fertilized this field. When the party in power thrives on chaos we all should expect chaos.

Quite: "Had Enough, America?"
Yes, stop sending us your garbage Central America and Europe.
Voters better wake up or the thugs, ANIFTA and Black Lives will be beating you stupid asses in your own living rooms.
The Marxists running this city want all the middle class whites who own most the private homes in good neighborhoods dead, beaten into submission or run outta town.
The mayor is using the thugs and lunatics as paramilitary to get things done. That why he defunded the police, prosecutors office and opened the jails.

Its a play straight from Fidel Castro's playbook 60 years ago. Why cant New Yorkers see this? Do they not teach history and the consequences of communism in schools ?

So what is really going on here? Why wasn't the guy charged with attempted murder or at least a felony assault charge which would have given the judge the power to remand him?

Are the police intentionally charging violent people with lesser crimes in order to artificially increase lawlessness to gain sympathy and funding?

Ned most don't care to hear the truth or read history.

Warp. The District Attorney is the one who sets the charges. The police let them know what happened and list the charges that are appropriate. The DA, especially these days lowers the charges for a better chance of getting something to stick. Not that they care anymore either. There is zero accountability for criminals right now. You break the law the chances of you getting arrested are low. Then the chances of the DA approving any charges are almost zero. Then the chances of you getting convicted are probably negative at this point. Usually a fine that you don’t have to pay because it’s not your fault you threw that man on the tracts. Then some diversion crap where if you don’t get caught doing anything for 6 months it’s gets wiped off your record.

Your an idiot for stating cops charge lesser crimes to artificially increase lawlessness and gain sympathy and funding.

Cops always charge the top charge. Don't blame them. I suggest you take a look at the District Attorneys office in each county. They love criminals and hate victims.

You can also blame the liberal judges and politicians for making the laws. Remember bail reform. How's that working out for the city?

That has always been the case. Take it from someone that has been involved in the criminal justice system for 30 years.

So don't blame cops but the system that is in place that you probably voted for.

Its a play straight from Fidel Castro's playbook 60 years ago. Why cant New Yorkers see this? Do they not teach history and the consequences of communism in schools ?

We learn plenty about the failures of communism, but we didn't learn much about how Castro took over Cuba, other than that he toppled an equally ruthless and bloodthirsty dictator.

What was Castro's playbook? How does it mirror what's going on now?

"How does it mirror what's going on now?"
Another brainwashed usefull idiot !

That comment "what was Castro's playbook, How does it mirror what's going on now" says it all. The brainwashing done by TV, schools and university's is just unfriggan believable!!
Its a man made brain disease this country's never seen.

Don't forget the Fake News disease there is no know cure !